Knox Co. Schools mask policy will continue for now after board fails to approve an early end to the mandate

Superintendent Bob Thomas said that unless the school board abandons the policy or the Department of Health follows Gov. Lee's change, the policy would continue. 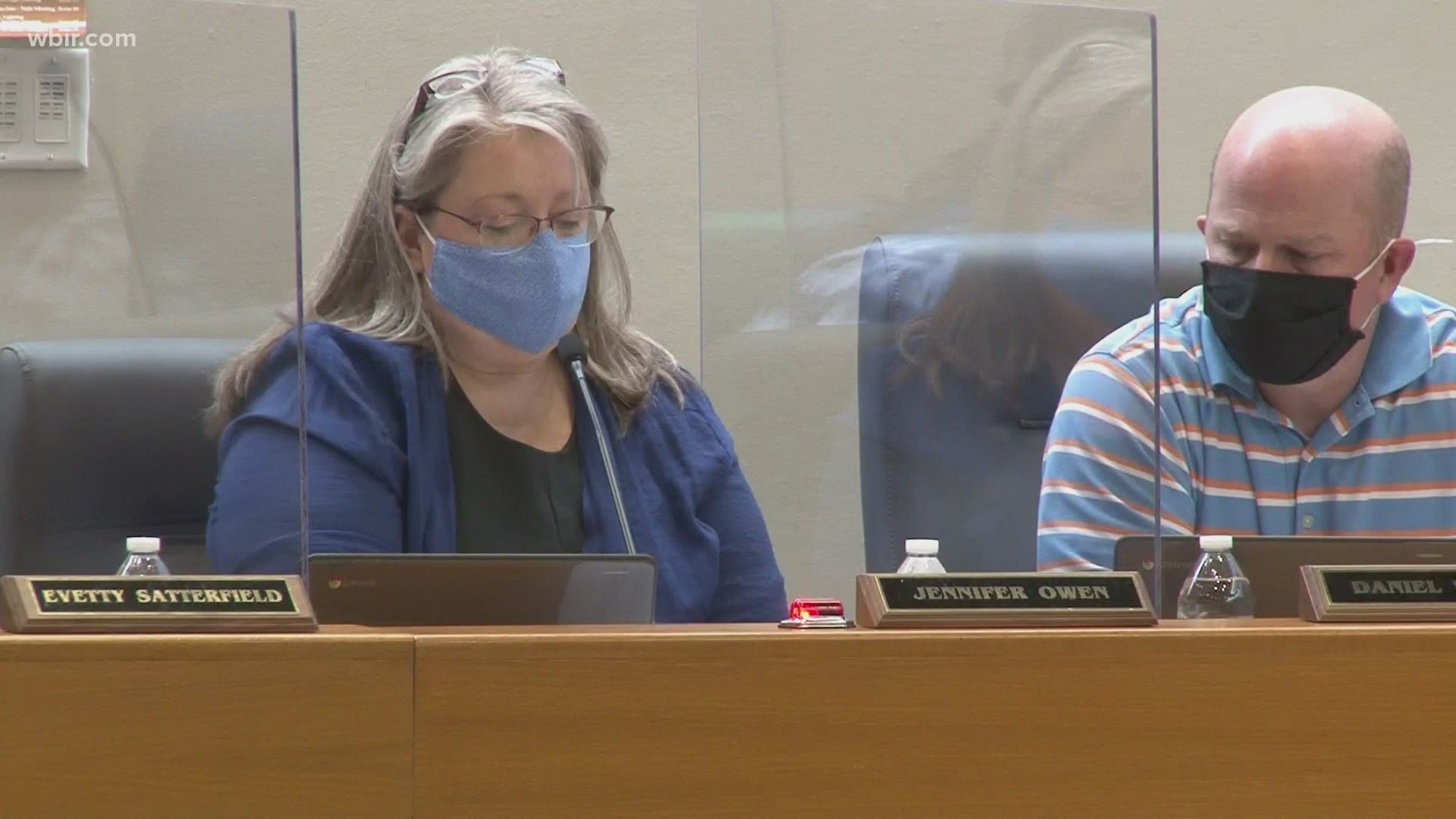 KNOX COUNTY, Tenn. — The mask policy in Knox County Schools will continue for the rest of the school year, at least for now.

The Knox County Board of Education held a special-called meeting at 10 a.m. on Friday to discuss ending its face-covering policy early, but members failed to even approve the agenda so it never came to a vote.

This comes after Superintendent Bob Thomas said on Tuesday that Knox County Schools would continue its mask policy, even after Governor Bill Lee announced an end to statewide public health orders issued in response to the COVID-19 pandemic.

Thomas said that the policy would continue unless the school board abandons the policy, or the Tennessee Department of Health follows the governor's changes. The policy is set to sunset and end on August 1.

Many Knox County parents want a decision made by the end of the school year.

Mom and daughter Meredith and Brady Kuester skipped work and school to be at the meeting. Brady Kuester is a senior at West High School.

They believe the district should fall in line with the state and county guidelines and give students the chance to choose.

"They don't have any choice, they are being forced with punishment or derision by their classmates," Meredith Kuester said. "Just let us as parents or students make that decision"

Parent Eric Moore has six children learning virtually this year. He thinks KCS should hold to their promise and follow what the CDC says.

"To remove that requirement, in a situation in which I don't have the option to move my children from one setting to another, would feel extremely disrespectful," Moore said.

Knox County Education Association president Tanya Coats said the board should have better things to worry about, like the budget and staff pay.

"With 18 days of school, I wish that this was not an urgency, because we've done a great job to this point," Coats explained.

The Board of Education will meet in its regular session on Wednesday so it could come up again for discussion.

Knox County Schools originally voted to follow guidelines from the state health department, as well as the Centers for Disease Control and Prevention.

Good morning! I’m at the @KnoxSchools special-called Board of Education meeting, where the board will vote on the mask policy for the remainder of the school year/next year.

There are 20 people signed up for public comment. The board will discuss after they speak. @wbir pic.twitter.com/NhmThmyRFc

Watson says he received more emails and voicemails about this topic than ever. Parents, teachers, doctors, nurses, principals and students reached out to him.