On May 19, the board informally appeared willing to use a facilitator. On Wednesday, some doubts emerged. 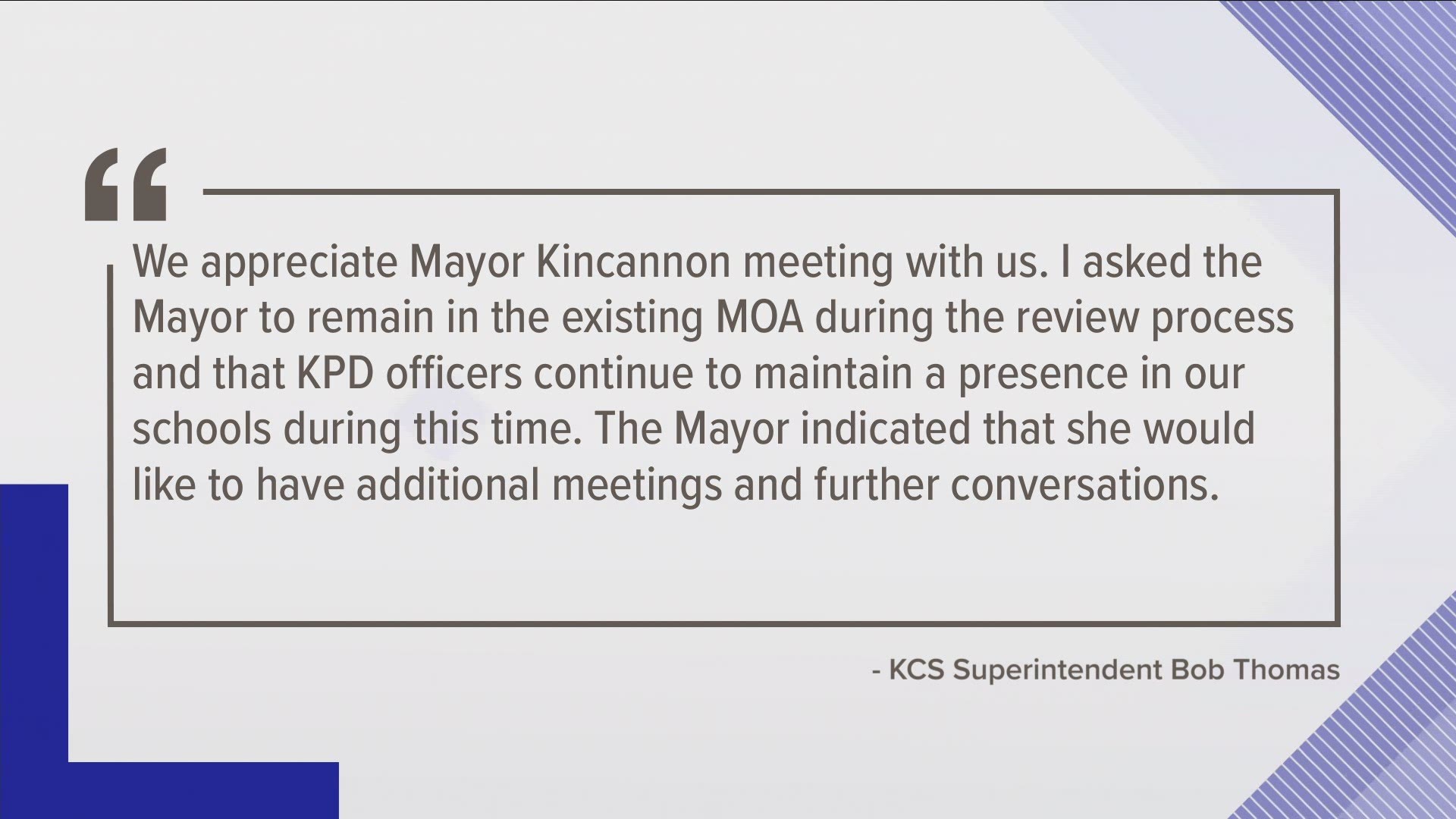 KNOXVILLE, Tenn. — Questions and doubts about hiring a facilitator have emerged among some Knox County school board members as officials wrestle with the future of a security agreement with local law enforcement agencies.

On May 19, the board informally appeared willing to hire outside aid to help them steer community participation in reviewing a standing memo of agreement with the Knoxville Police Department and Knox County Sheriff's Office.

Superintendent Bob Thomas and his staff began moving in that direction.

Credit: KCS
May 28 letter from Bob Thomas to Mayor Kincannon.

Then Mayor Glenn Jacobs raised questions last week in a letter about the need to hire a "consultant". The board could handle the task on their own, he wrote.

On Wednesday, the topic was back for discussion among Knox County Board of Education members, who generally noted they're not talking about removing police from public schools. The board did not vote.

Members Evetty Satterfield, Jennifer Owen and Daniel Watson said they want the board to hire a facilitator. There's a perception among some in the community that the system can't be trusted on its own, members said. They don't agree with that notion but said it's worth acknowledging.

"We're too dysfunctional to do this without a facilitator," Owen said.

The board shouldn't let outside interference get in the way of what they're trying to do, Satterfield said.

Board member Virginia Babb said she, too, supported using a facilitator. It will help ensure transparency and the collection of a wide range of community input, she said.

Board member Mike McMillan said he opposed hiring a facilitator. The board, he said, should concentrate on where concerns and comments are being raised -- District 1, which includes Austin-East Magnet High School where an armed student was shot and killed during a police confrontation in a bathroom April 12.

Board chair Susan Horn said she preferred that each board member hold a meeting in their respective district to hear what the public there thought. Each board member could then relay their findings to the elected body.

Horn also said she was concerned about trying to "micromanage" whatever new agreement they come up with. There should be room for discretion and flexibility, she said.

Thomas said he hasn't yet prepared any possible hiring contract for a facilitator. Thomas said as a practice he also listens when he gets input from the county mayor.

"An outside part brings expertise we don't have," he told board members. "However, do you win this battle and lose the war? I don't know."

On Friday, Thomas sent Knoxville Mayor Indya Kincannon a letter seeking to clarify the city's commitment to remain in the security MOA.

Kincannon this spring announced she would pull KPD from the agreement in June. But, she said, she wanted the city to be part of the discussion about continuing to offer officers who would work in Knox County Schools.

Then, last month, Kincannon indicated she'd be willing to let officers stay in the schools as a "provisional arrangement" if needed as the board talked out a future memo of agreement.

Thomas's letter Friday asked Kincannon to "consider remaining in the existing MOA until the process is finalized and the KPD officers continue to maintain a presence in our schools during this time."

Thomas asked for a decision as soon as possible.

The superintendent told board members Wednesday that his letter prompted the scheduling of a meeting with Kincannon on Thursday.

Officials with Knox County Schools released the following statement about that meeting:

We appreciate Mayor Kincannon meeting with us. I asked the Mayor to remain in the existing MOA during the review process and that KPD officers continue to maintain a presence in our schools during this time. The Mayor indicated that she would like to have additional meetings and further conversations. 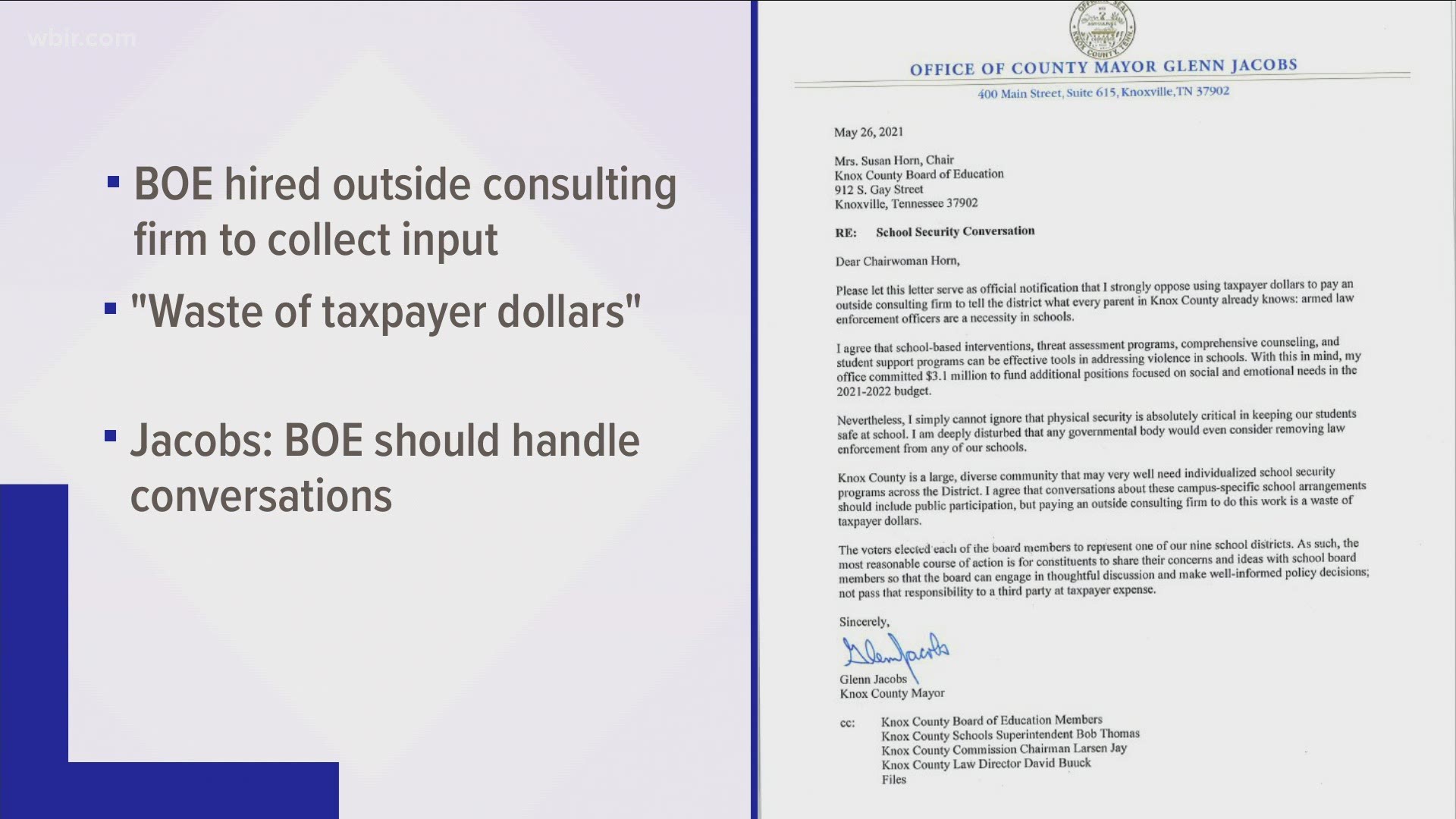