UT officials said a faculty member wrote a racist acronym on a whiteboard during an Africana Studies class. 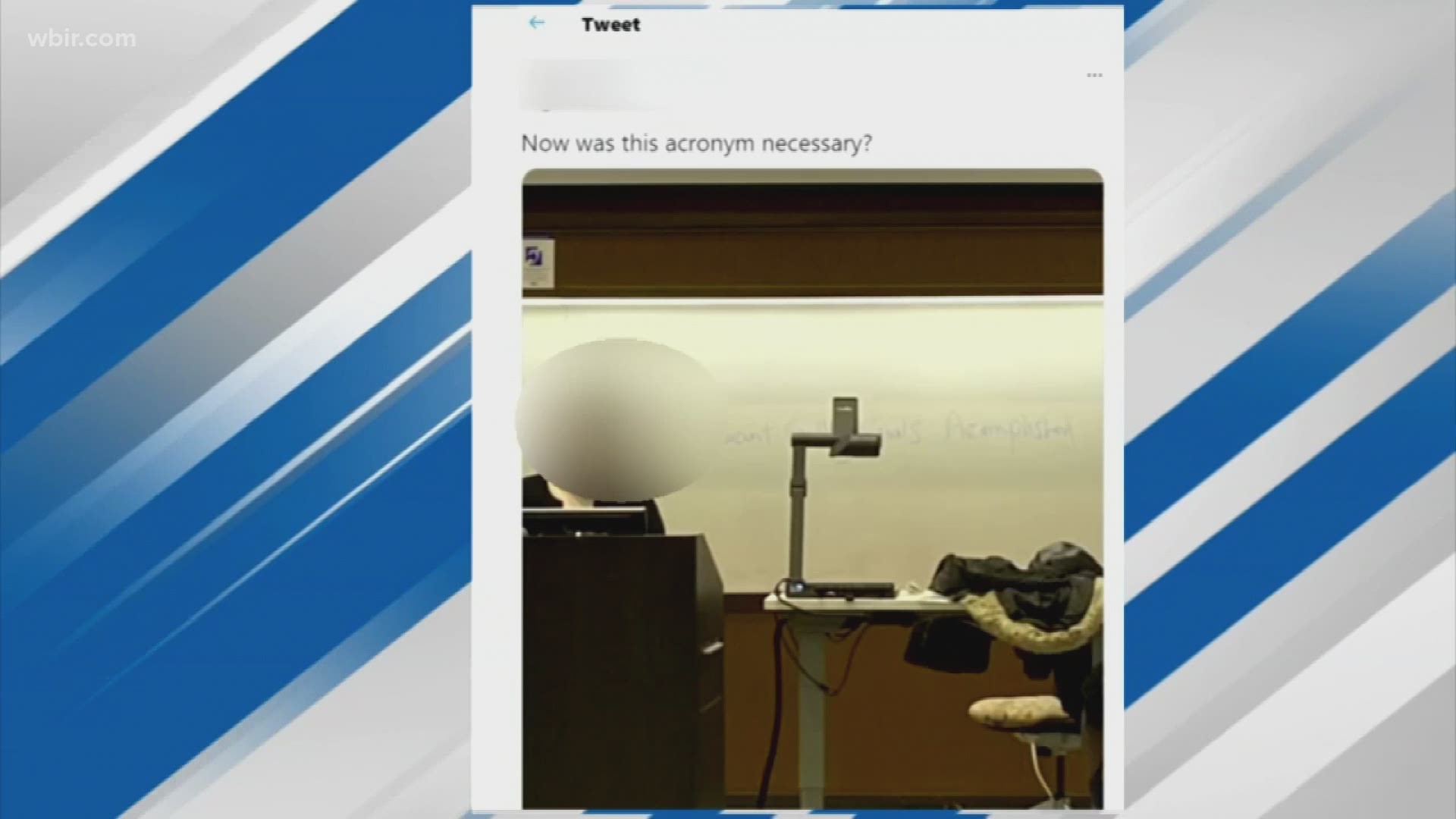 KNOXVILLE, Tenn. — Officials with the University of Tennessee are apologizing after a faculty member wrote a racist acronym on a whiteboard during an Africana Studies class during a discussion about the complexity of language in the context of race relations.

They said on Thursday that college leadership was talking with students and faculty members about the incident and that they were working to fully understand the situation.

On Wednesday, a student posted a tweet showing the acronym and tagged the University of Tennessee in it.

"Now was this acronym necessary?" the student wrote in the tweet. The lecturer was pictured in front of the acronym wearing a University of Tennessee facemask.

The acronym is also the name of a song by Tupac, a renowned rap artist. Officials said the faculty member has focused their research on Hip Hop and Africana Studies. The class discussion included another one of Tupac's songs.

"The 'take-away' message was not supposed to be the acronym, but the context in which Tupac devised it—to counteract racially-oppressive acts such as treating people discriminatorily and suppressing their fullest potential," officials said in a release.

Officials with the Africana Studies program also said the lesson was about how complex language can be in any form and the significance of race, politics and cultural appropriation when using language. They said the lesson was rooted in knowledge about the power dynamics of race and the history of race relations.

They said that it would be disingenuous to the body of knowledge in Africana Studies if they did not engage in those concepts.

"People will be unsettled and uncomfortable with the hard truths of our discussions, but we also want to be cognizant and tone-hearing of (re-)traumatization to communities that have faced trauma, over time," officials with the program said in a release.

Officials with the university said that they were still gathering information about the incident and that additional actions could be taken.

Last summer, the University of Tennessee also faced several issues with racist behavior. In June, a student who made a "violent and disturbing racist" video lost their enrollment with the university. That same month, a cheerleader was barred from joining the team after a video of her using racist slurs was posted on Twitter.

And in July a student posted a racist image on Instagram. In the post, they implied that they could use racial slurs because of it. They said they were addressing the image directly with the student involved.

WBIR chose not to show the original tweet due to its sensitive nature.

College and department leadership is actively talking with our students and faculty member about an Africana Studies class in which the faculty member wrote a racially charged acronym on the whiteboard. (1/4)