The communications office acknowledged a formal records request Tuesday, weeks after it was legally required to. 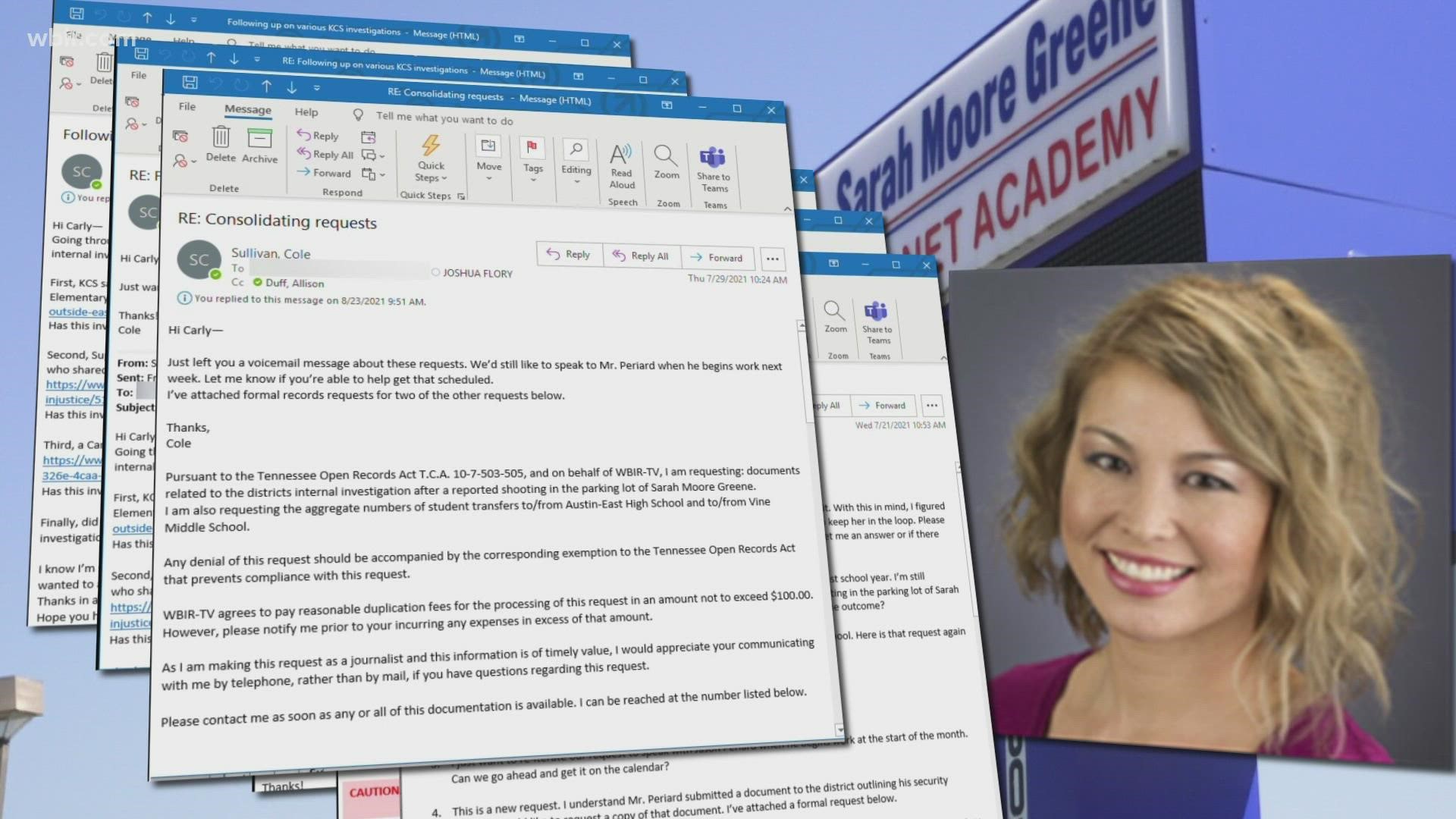 KNOXVILLE, Tenn. — Months after a reported shooting in the parking lot of Sarah Moore Greene Elementary School prompted a two-hour lockdown and an outcry from frightened educators, the Knox County School district would not give details of its investigation into how the incident was reported.

On March 9, the mother of an Austin-East High School student told Knoxville Police she pulled into the elementary school's parking lot to evade a threatening car that was following her and her son.

That's when she—and school staff—said a passenger in the car shot toward the school. A school board member said there were children on the playground in front of the building at the time.

Audio from a 911 call shows the school's security officer reported the disturbance from the cars in the parking lot and sounds of gunfire in the neighborhood behind the school.

He did not tell dispatchers there was a shooting in the school's parking lot, audio showed. As a result, a KPD spokesperson indicated, there was a delay in officers' response to the school itself—which led to an outcry from frightened teachers.

The district said on March 11 it would review the incident and how it was reported.

"This is now a lesson to see what needs to go in place to ensure if it happens again that we’re protected," School Board member Evetty Satterfield said at the time.

Despite nearly a dozen inquires—over the phone and via email—the district's Communications Director Carly Harrington will not give details of that investigation's outcome.

After a month of request from 10News, Harrington responded "an investigation was conducted and appropriate disciplinary action was taken."

She did not reply to multiple follow-up emails and calls asking what the investigation found.

The district responded to a July 29 public records request from 10News on Tuesday, weeks after it was legally required to.

"This letter is to inform you that we are currently in the process of retrieving, reviewing, and / or redacting the requested records," the response said. "We will make every effort to be expeditious in filling your request and will contact you once the records are available."

Satterfield said Tuesday the district should release details of the incident and its findings.

"I think this is an opportunity to at least be transparent with the community and be like 'Hey this is what happened, this is the timeline, this is what we're doing to improve,'" she said. "How can we learn from what's happened in this past year and get better so that we won't have the fear of kids getting outside and playing on the playground?"

Satterfield said she's hopeful for improvements under the district's new Chief of Security, who started in the role in early August. She also said teachers and students continue to show up to school despite these challenges.

"And I think that speaks volumes about how determined and resilient we are as a community," she said.