Kenny Rogers and Dolly Parton perform for the last time at the All In For the Gambler tribute to Kenny Rogers at the Bridgestone Arena in Nashville, Tenn., Wednesday, Oct. 25, 2017. 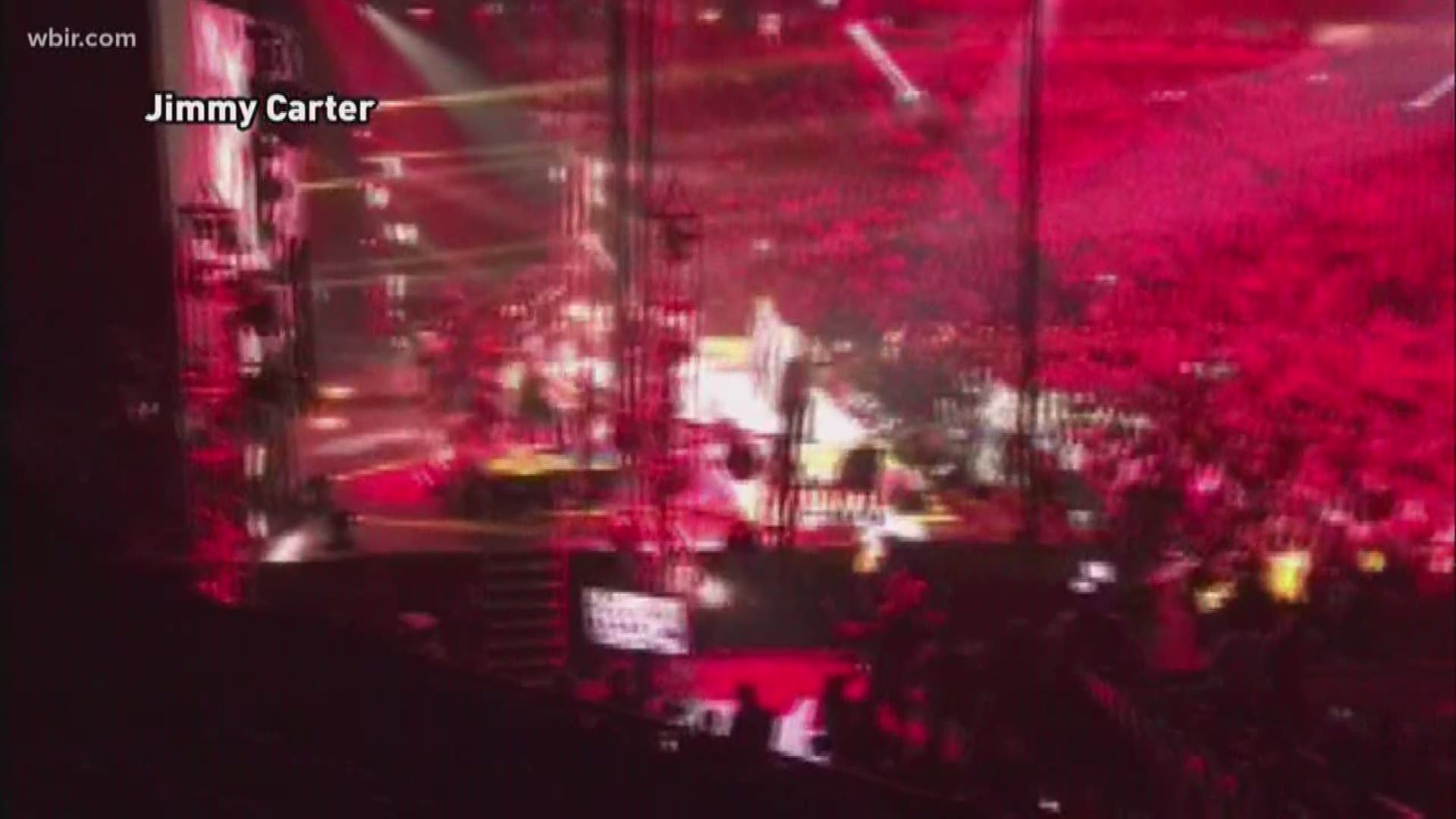 Dolly Parton and Kenny Rogers closed “All In For The Gambler: Kenny Rogers’ Farewell Concert Celebration” at Bridgestone Arena Wednesday night the way their fans love to see them — side by side.

“How about me and you go out like rock stars?” Parton asked Rogers. The longtime friends held their microphones out in front of them, dropped them on stage and walked off arm-in-arm.

It was a definite ending to a night that was filled with sentimental moments and music’s biggest stars performing Rogers’ most famous songs. The concert was billed as the last time Parton and Rogers would perform their seminal duet “Islands in the Stream.” However, before the show, Parton maintained she wasn’t going to let Rogers retire completely.

►RELATED: Dolly Parton and Kenny Rogers reveal why they never became a couple

“I’m just going to let him retire from the public and then we might even write some songs together, who knows?” Parton said.

“Oh man,” Rogers replied excitedly. “I didn’t think of that.”

Later, she brought audience members to tears when she spoke of her adoration for Rogers.

“I know I’m artificial, but I like to think my heart is real,” Parton told Rogers before she serenaded him with “I Will Always Love You." "I have a spot (in my heart) for you that’s never ever going to be touched by anybody else."

Rogers, who struggles to stand for more than a few minutes at a time, soaked in Parton’s performance from a stool beside her.

He took a moment to thank the audience and the night’s performers. Parton asked him if he was ready for their final “Islands in the Stream,” then quoted the song saying there is no one with whom she’d rather sail away.

Parton was one of more than 20 artists who took the stage to honor Rogers, who in 2015 revealed plans to retire after a final tour that ends later this year. Rogers, 79, and his wife Wanda watched from chairs on the side of the stage as performers ranging from Kris Kristofferson, Chris Stapleton, Lady Antebellum and Little Big Town to Lionel Richie, The Flaming Lips and Elle King honored Rogers.

Rogers’ music career stretches 60 years, more than 30 studio albums, and included 24 No. 1 hits, six CMA Awards and three Grammys. He was inducted into the Country Music Hall of Fame in 2013 and was voted the "Favorite Singer of All Time" in a joint poll by readers of both USA TODAY and People. He was a member of rock group Kenny Rogers and the First Edition from 1967-1976, and his former band mates joined him on stage for a quick picture with the audience in the background.

The show’s creator and executive producer, Keith Wortman, said the diverse lineup for the farewell celebration was carefully vetted. He explained he “casted a wide net” for potential singers and that when they responded, he asked how long they’ve been a fan and how “The Gambler” singer influenced their lives. He said the unexpected additions of King and The Flaming Lips stemmed from their love of First Edition songs.

“I’m really excited to sing and see the show,” said King, who covered First Edition’s “Tulsa Turnaround.” “I don’t know who said no or got kicked out so I got in, but I’ll take it.”

Rogers’ connection with the night’s other performers is much deeper.

Chris Stapleton covered Rogers’ signature hit “The Gambler,” on the back of which he built his acting career. The song inspired a successful television miniseries that served as his acting debut. Five additional television movies — all starring Rogers as gambler Brady Hawkes — followed, along with the 1982 major motion picture “Six Pack” among other acting projects. Rogers appeared alongside Naomi Judd of The Judds on one of The Gambler projects, and she and daughter Wynonna Judd reunited for Wednesday night’s concert.

“We’re family here in Nashville. We stick together,” said Wynonna, who sang “You Turn the Light On” before her mother Naomi Judd joined her for a performance of “Back to the Well.”

Reba McEntire — who wore a bright yellow Kenny Rogers T-shirt while she sang his “Reuben James” — described the backstage area as a “family reunion.”

Rogers’ relationship with Nashville dates back to the 1970s when “Lucille” became his first substantial hit as a solo artist and crossed over to top the country charts. Justin Moore performed the song for Rogers on Wednesday night, having traveled from his home state of Arkansas with his wife and children and learned the song on two days’ notice.

Richie flew in from Australia to sing “Lady” for his longtime friend to whom he gives credit for launching his solo career. Rogers acknowledged Richie for writing “Lady” from the stage during a country music awards show decades ago. The spotlight swung from Rogers to Richie’s seat in the audience, and the “Hello” singer said that was the moment his solo career took root.

“At that moment, I had a person to be my mentor because he was also in a group then transitioned to a solo act,” said Richie. “He answered every question I had. So, he’s very special.”

The Oak Ridge Boys also credit Rogers with launching their career. Before opening the show with “Love or Something Like It,” Oak Ridge Boy Joe Bonsall said Rogers took the group on country music’s first arena tour.

Linda Davis said there were “so many levels of special” about the evening. She’s on tour with Rogers now, and Davis’ daughter Hillary Scott from Lady Antebellum joined her on stage to sing “Twenty Years Ago.” Davis said it was “bizarre” how he was now helping a second generation of her family.

“He’s a part of our family,” Davis said. “It looks we are winding it down, that’s what farewell is. But tonight is celebrating all of these years and all of these relationships, and let’s not forget the fans. Because the fans, that’s why he’s been here this many decades and I see it every night.”