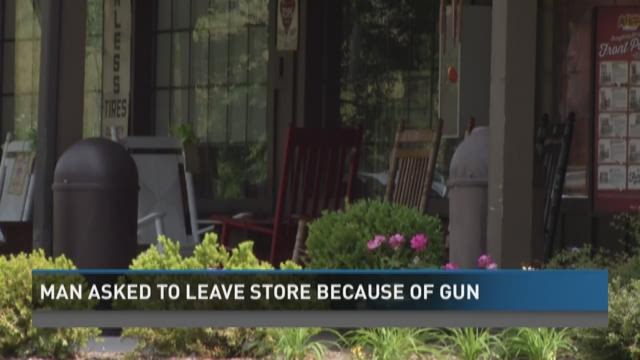 Shane Franks says he went to the Cracker Barrel in Dalton to purchase Mother's Day cards. He says two managers escorted him out because he was carrying a gun, a gun he believes he had every right to take with him into the building.

This revolver is what triggered managers at the Dalton Cracker Barrel to escort Shane Franks out of the building Monday. Franks says he was legally carrying the gun on his hip when management asked him to leave. “If the business does not want you to carry a firearm, they are asked to make that known,” said Franks.

Franks said there was no sign posted telling him he couldn't take the gun in until after he returned without the weapon. “When I came back there was a paper sign and place it on there and it said unless you are law enforcement you are not supposed to have a fire arm.”

Georgia's Safe Carry Protection Act says it's legal for licensed gun owners to carry in schools, churches, bars, and even some government buildings. Private businesses have the right to decide if they want guns on their property. “That’s confusing for a law abiding citizen. Thinks he's obeying the law and walks in, gets cornered in front of everyone for doing what he thinks he is allowed to do.”

When Channel 3 visited Cracker Barrel Friday the makeshift sign was no longer in the window. A manager referred us to a corporate spokesperson, who denied our request for a statement, but a customer service representative tells Channel 3 if a gun is seen on any Cracker Barrel property the owner will be asked to return to their vehicle. Franks says he got a similar response. “It's our policy no one carries on the premise. I said, you don't have any signs. He says, well that's our decision also, we don't put up signs.”

Sign or no sign, Shane Franks said there is no hard feelings towards the restaurant he's just looking for answers so he doesn't have to run into this problem again. “By law, you got to have a sign so that way I know that.”

Georgia law allows a licensed holder to carry a gun. It also allows private property owners, like Cracker Barrel to ban guns from their property. The law is not clear on how and where a sign must be posted to notify customers when a gun is not welcome.