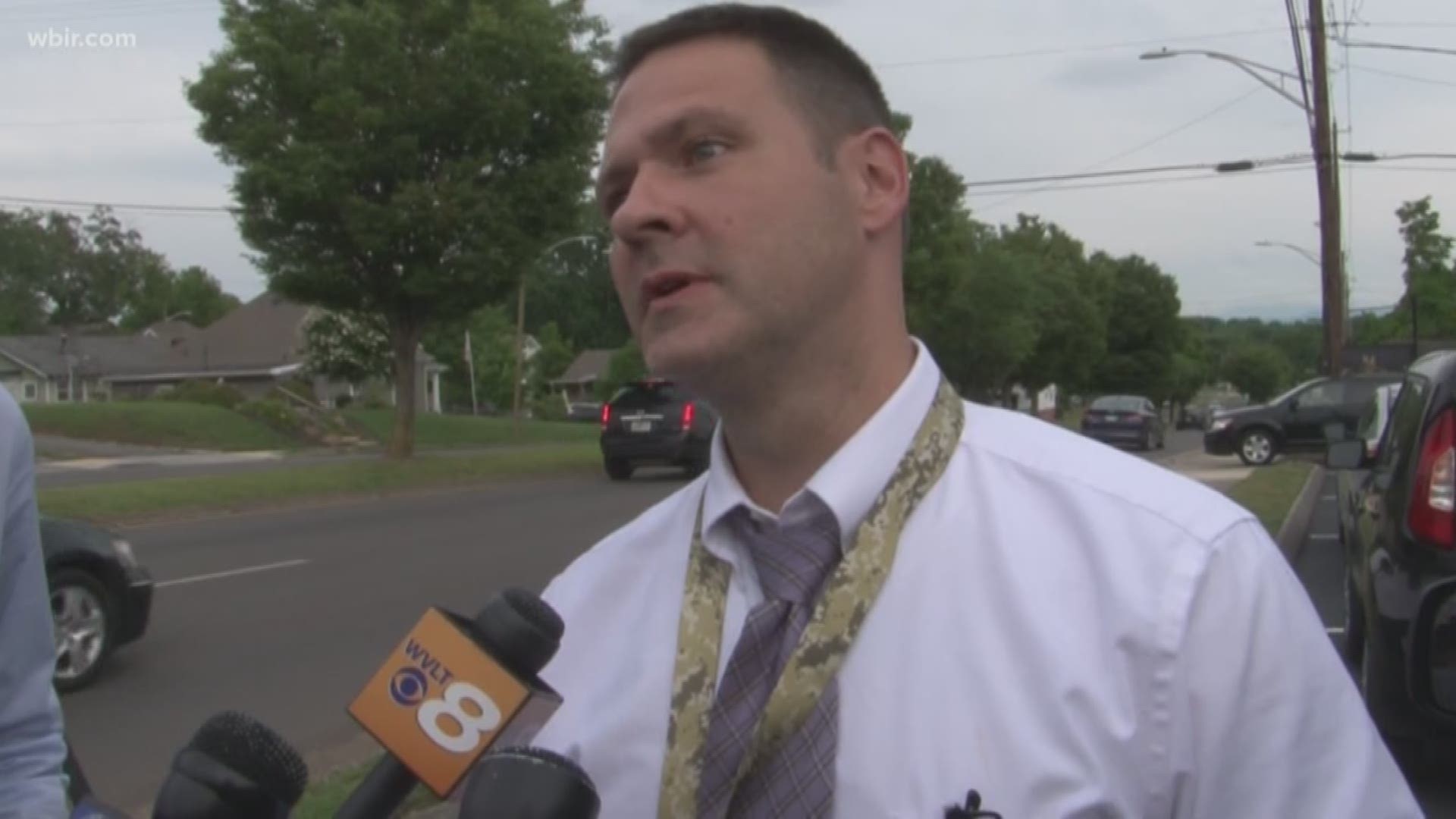 KNOXVILLE, Tennessee — A veteran Knox County Sheriff's Office detective and Baptist pastor is under fire for calling gay, bisexual and transgender people "freaks" and "reprobates" who deserved to be executed by the government.

Grayson Fritts, a 20-year KCSO veteran, delivered his remarks this month having already quietly decided to accept a buyout from his police job.

"As District Attorney, my constitutional obligation is to protect the integrity of the justice system. When any potential witness in a criminal proceeding expresses an opinion of hatred and/or bias towards a class of citizens, I am ethically bound to explore that witness’ credibility," she said.

"Although my office has never received a complaint regarding Mr. Fritts prior to this incident, I have assigned an Assistant District Attorney to receive complaints regarding closed cases, and I will act on those complaints as justice dictates,” she said.

Along with being an investigator, Fritts pastors the All Scripture Baptist Church, which identifies itself as an "independent, fundamental, King James Bible only, soul-winning church."

Fritts said homosexuals are "reprobates"  and "God-hating animals." He also referred to gay men with a word widely considered offensive to that group.

"If you don't hate them, you're brainwashed. You don't know how wicked these people are."

Also, in a June 2 sermon at the church, Fritts said gay people "were worthy of death" and should be tried and executed by the government. Homosexuality is a "capital crime," he said.

Policemen, he said, had a duty to carry out their roles in seeing that gay people are prosecuted.

It reads: "Detective Fritts turned in his request for The Knox County Voluntary Workforce Reduction Buy Out approximately two weeks ago. I accepted his request. Detective Fritts is no longer on active duty with the Knox County Sheriff's Office, he is currently on paid sick leave until the effective date of the workforce reduction which will be July 19, 2019.

"I want to be very clear that it is my responsibility to ensure equal protection to ALL citizens of Knox County, Tennessee under the law, my oath and the United States Constitution without discrimination or hesitation. Rest assured that I have and will continue to do so."

“We are looking into it and will respond accordingly," the statement reads. "As District Attorney, I have dedicated my career to the belief that justice is blind and that all people are entitled to equal protection of the law. I always have, and always will, prosecute fairly and justly, based upon the law and the evidence, without prejudice, bias, or discrimination of any kind.”

Fritts told church members June 9 he knew it was a "very controversial topic" but that the church's position has been "mischaracterized."

The church makes clear its position about homosexuality on its website.

It states: "We believe that sodomy (homosexuality) is a sin that is against nature. A person will only burn in their lust toward the same gender if they have been given over to a reprobate or rejected mind. God said homosexuality should be punished with the death penalty as set forth in Leviticus 20:13. No homosexual will be allowed to attend or join All Scripture Baptist Church."

Fritts is a former Detective of the Month for the Sheriff's Office.

The office under Sheriff J.J. Jones commended Fritts and another detective in 2017 with quickly identifying and arresting an attacker in a March 2017 home invasion in which the victim suffered severe wounds.

In his sermon earlier this month posted online, Fritts told parishioners that rather than acknowledging God, gay people actually reject Him.

Sodomites worship a different god, Fritts said, referencing the Bible. Their lifestyle is wicked, he said.

'It is a capital crime'

In his June 2 sermon, Fritts said he wanted to address a topic other churches wouldn't touch: sodomites. It's a sermon, he said, that needed to be preached.

Christians can't "go soft on the homos," he said in the sermon.

The Bible says they're worthy of death, Fritts said. He referenced the Book of Leviticus.

"Here's how it should work: It shouldn't work where we go out and we enforce the laws because the Bible says the powers that be are ordained of God. And God has instilled the power of civil government to send the police in 2019 out to these LGBT freaks and arrest them and have a trial for them and if they are convicted then they are to be put to death," he said, at times slamming his hand against the lectern and shouting.

"Do you understand that? It is a capital crime that should be carried out by our government. Not Christians -- unless you're a policeman. You know what I mean. If you are a policeman, it should be your responsibility to carry these things out."

“I’ve worked cases before where these people are like horrible," he said. "Have committed atrocities. Some of them I can’t talk about just yet. Atrocities, horrible things. Rape, assault, murder. Horrible things. You’re like, How can this person do that? Then you start getting into the investigation and guess what, they’re a homo. They’re a homosexual.”

Gay people also were involved in filth, he said.

Fritts also said the Indian activist and philosopher Mahatma Gandhi was a "false prophet" and a Hindu.

Sterling Field, chairman for the Tennessee Equality Project in Knox, Anderson and Blount counties, said it was appropriate that Fritts stop being a detective and public employee.

Veteran defense attorney Don Bosch said Wednesday that Fritts wrecked his credibility in the eyes of the court with his comments.

Attorneys have the right on behalf of defendants to seek to find if witnesses have any bias when they take the stand. Fritts' undermined his own standing by what he said, Bosch said.

"He will never escape this," said Bosch, a WBIR legal consultant.

Tracy Halter says she is floored by the hatred from Fritts.

“I just apologize," Halter noted. "I’m sorry to anyone who is hurt by those words, because that’s not who Jesus was and if he was walking around this earth right now hearing so much hatred."