"I would rather take care of somebody than myself, so it's been really hard to be on the other side of things." 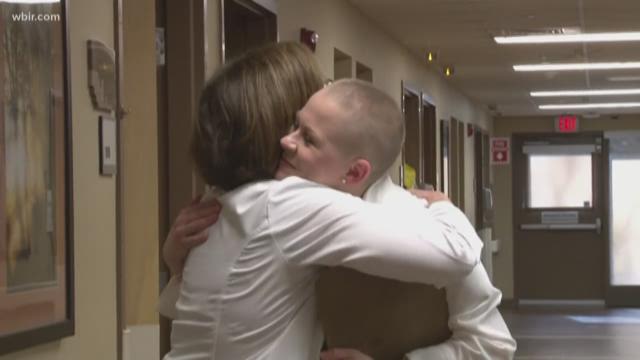 NEWPORT, Tenn. — Marissa Pressnell is a nurse at Newport Medical Center who finds greater joy in helping others than someone helping her.

"I just feel like I would rather take care of somebody than myself, so it's been really hard to be on the other side of things, but I've gotten kind of used to it," Pressnell explained.

Pressnell said she had always dreamed of being a nurse, she noted that her brother had gotten into a car accident when she was young and thought her family spending so much time in the hospital sparked that interest.

In 2017, when Pressnell's son Rhett was born, she noticed a strange spot on her breast. She visited her doctor, who assured her it was probably nothing serious. Pressnell continued to feel wary about the spot and ventured to get a second opinion.

"My heart kind of sunk because I just kind of knew," Pressnell said. "I knew what my phone call was. It was the radiologist calling me to tell me it came back cancer."

She found out she had breast cancer when she was still nursing her 9-month-old little boy Rhett and had her 4-year-old daughter Emery at home.

When she found out about her diagnosis, she dreaded telling her family because she knew they would be heartbroken. She called her husband and they both sobbed on the phone together.

Pressnell headed to get her children from the babysitter. She told her daughter Emery about her cancer diagnosis and Pressnell says Emery looked at her and said something that melted her heart.

"She said, 'Okay. Mama you'll get better,' and I said I know I will, but you just have to pray for Mama," Pressnell explained.

Her daughter Emery understood what was going on more than she realized, and she was determined to make her mom better through the power of prayer.

"I would catch her a couple of times praying for me," Pressnell said. "She'd be down on her little hands and knees and she'd say 'Mama I was praying to Jesus to take this cancer away and never let it come back.'"

After many prayers and support from everyone around her, Marissa had a bilateral mastectomy and found out she was cancer free at the end of 2018.

"So I give all my glory to God," Pressnell admitted.

She says she probably has no idea how many people have prayed for her recovery, and she leans on her faith in every way.

She still has to do radiation treatments, but that doesn't stop her from seeing the bright side of things in life.

"I am a better person today for it," Pressnell admitted. "I'll tell you what. At least I'm going back to work. You know things could have been a lot different. So I'm happy to be back to work."

Marissa urges anyone who feels like something isn't right with their body to get second opinions, persist, and listen to your gut. She believes God laid a feeling on her heart, and she pursued that feeling until she got the breast cancer diagnosis.