La Crosse encephalitis is a viral infection that can cause headaches, fever, nausea, vomiting, drowsiness and disorientation. In severe cases, seizures, coma or even death may occur. 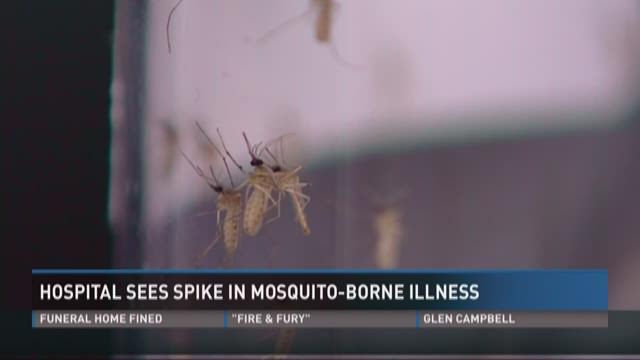 East Tennessee Children's Hospital is concerned about a recent spike in cases of La Crosse encephalitis, a mosquito-borne illness that mostly affects children.

"On average the U.S. reports about 80-100 cases of La Crosse per year, with Tennessee averaging a dozen cases annually. We have seen seven children at East Tennessee Children’s Hospital with confirmed La Crosse in the last four weeks," says Dr. Lori Patterson, an Infectious Disease Physician at Children’s Hospital.

To put the seven cases in the last month into perspective, Tennessee only saw 32 cases during 2012 and 2013 combined.

La Crosse encephalitis is a viral infection that can cause headaches, fever, nausea, vomiting, drowsiness and disorientation. In severe cases, seizures, coma or even death may occur. It is the most common cause of mosquito-borne illness in the United States and Tennessee.

La Crosse is diagnosed with a blood test, and it usually requires hospitalization.

One family is dealing with a form of encephalitis at Fort Sanders Regional Medical Center.

Staying hopeful is the only thing on Booher's mind.

"In hopes of in the next month or so, she can begin the process of waking back up," said Booher.

Jones, 24, has been in the hospital with what doctors believe is encephalitis caused by a mosquito bite.

"For her birthday, June 24, we went out to the Nolachukee River in Greenville and she received a lot of insect bites," said Booher.

Angel was sick soon afterward with what looked like flu, but it was much worse.

"But woke up that Friday and was still kind of feeling ill, and then later that evening was when she had her first seizure," said Booher.

The seizures didn't stop, and she was forced into a coma, where she works to recover.

Booher encouraged other families dealing with this disease.

"They did tell us you know, if she were to wake up they don't expert her to have much of a recovery, but after we've done a lot of research, there are a lot of people that have been thought this and have woken up, and have functional and decent recoveries," said Booher.

Angel's case is related to what Patterson has seen in the last month.

As with all mosquito-borne illnesses, the most effective defense is avoiding bites. ETCH advises that parents make sure their children are wearing mosquito repellant and dress them in long sleeves and pants if they are going outside.

"These mosquitos don't travel very far, maybe up to about a quarter mile or so," said Patterson. "So if your child comes down with La Crosse encephalitis, it's probably from around your home."

Mosquitoes breed in standing water, so experts also advise checking your property and:

The CDC says Tennessee has the fourth highest number of La Crosse Encephalitis cases in the country.

Patterson says the hospital has been working with UT's entomology department to learn more about how mosquitos are breeding and how the virus spreads.