A box of nearly 1,000 COVID-19 vaccines went missing. Then the confusion started.

The Knox County Health Department said a box representing nearly 2% of all COVID-19 vaccines distributed in the county went missing. 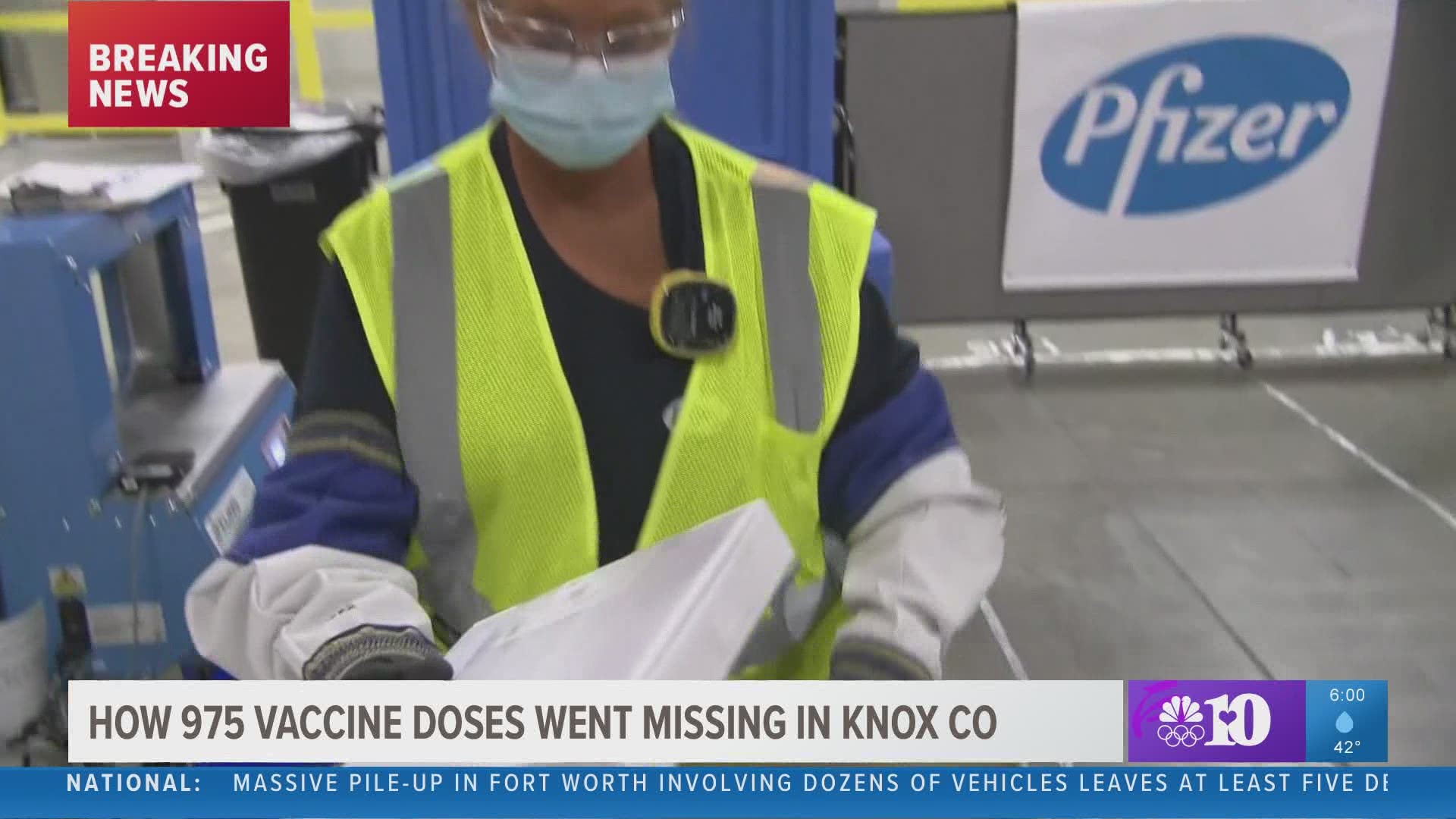 Days of public confusion, mixed messages and urgent press releases later — it is still not clear what happened to the potentially life-saving vaccine, or whether it even arrived at the health department in the first place.

"At this point, we cannot be sure the doses in question were actually shipped," Knox County Mayor Glenn Jacobs said Friday, contradicting statements from the vaccine manufacturer, Pfizer, which insists the box arrived and someone signed for it.

The Tennessee Department of Health said it was working with the county health department to investigate the incident it believes was "human error."

The missing doses represent nearly 2% of all vaccine distributed in Knox County, though the health department said no one would be denied scheduled second doses. It said no misconduct is suspected and neither the county sheriff's office nor the city police department were investigating.

Moving forward, KCHD said two employees will greet every box of vaccine when it arrives and every shipping box, regardless of content, will be fully inspected before it is discarded.

In addition, KCHD will create calendar reminders to advise when second doses should arrive and will check with the county's IT workers to ensure notification emails from the vaccine manufacturer are not being stopped by firewalls.

The first realization that there might be an issue with a box of vaccine doses came Thursday, Feb. 4, the health department said.

After months of receiving and distributing the Moderna shot, it had begun to get shipments of Pfizer vaccine, which requires unique ultra-cold storage procedures involving dry ice.

The first box of 975 Pfizer shots arrived approximately three weeks ago without any issues, the department said. For the first time in years, the department also received some dry ice to aid with the storage of the vaccine.

Eighteen days later, according to state plans, the Tennessee Department of Health directed Pfizer to send KCHD a second box of 975 shots designated for second doses.

KCHD said it received a shipment notification for this second box, but "it contained an inaccurate/nonfunctioning tracking number." It said there was no confirmation of delivery, but a box of some kind did arrive. Sometime later, a differently designed box with only dry ice inside arrived as well.

It was not until Feb. 4, when an employee realized the department did not have the second-dose Pfizer shots it was expecting, that the alarm was raised.

"KCHD immediately reached out to the Tennessee Department of Health to investigate," a health department spokesperson said.

Five days later, on Tuesday, Feb.  9, the state told KCHD the vaccines were shipped and delivered to the health department.

Over the course of the next three days, confusion ensued over what happened.

At Wednesday's press conference, KCHD director Buchanan said the box of vaccine arrived, was mistaken for only dry ice and then thrown out.

"What we believe happened is they were discarded, disposed of, believing that it was just a box of dry ice," she told reporters.

But Thursday, the health department cast doubt on whether the shots arrived at all.

"The box was opened, but it contained no packing slip, what appeared to be only dry ice, no GPS tracker and it did not have the normal vaccine container within," a department spokesperson said.

She said KCHD has no confirmation or documentation of delivery, just assurances from the state that it arrived.

All Pfizer vaccine boxes are shipped in nondescript containers with a thermal-sensitive GPS tracker to monitor location and temperature of the doses.

"This occurred after Pfizer safely delivered the vaccine within all specifications to the point of use facility, and the order was accepted," a Pfizer spokesperson said, later adding that the term, 'accepted,' meant someone signed for the order.

In a statement Friday, TDH said it appeared the Pfizer GPS equipment tracked the box properly.

Yet on Friday afternoon, county Mayor Jacobs cast further doubt about whether the box arrived.

"Initially, the Health Department believed that the vaccines were mistakenly discarded, but we aren’t exactly sure if that is actually the case," he said in a video posted to Facebook.

He still blamed the health department for not fully inspecting the box it threw away after an employee assumed it didn't have shots inside.

"If there were no vaccine, we could conclusively tell Pfizer and the state that we never got it and they would have taken corrective action on their end. Instead, we are scrambling trying to determine what actually happened," he said.

On Thursday, the Knox County Health Department said it still planned to receive Pfizer COVID-19 vaccines in the future. However, the Tennessee Department of Health said Friday it would stop sending Pfizer doses to KCHD.

Both later clarified the change was unrelated to the missing doses.

Earlier in the week, after KCHD reported the doses missing, TDH asked which of the two types of vaccine the department would prefer to receive moving forward.

Because of the more complicated storage requirements of the Pfizer dose, KCHD said it would prefer to receive Moderna shots in the future.

The state will still send enough Pfizer doses to KCHD for it to administer second doses of Pfizer shots to people who received first doses of that type of vaccine.

KCHD said the future change will not impact the number of doses shipped to Knox County and that the department would not refuse to accept Pfizer doses should the state send a box.

It is not clear whether this will impact the doses sent to Knox County hospitals, which have typically received Pfizer doses in the past, because they have the appropriate storage facilities.

The Knox County Health Department said it is continuing to investigate the circumstances that led to the doses going missing.

The department said no employees were disciplined or reassigned. It is not clear whether there is surveillance camera footage of the box arriving or being thrown away.

"At this time, there is no reason to believe anything nefarious took place," a spokesperson said.

In his video address, Mayor Jacobs offered support to the department and its director.

"Let me be clear, I am proud of Dr. Martha Buchanan and I am confident in the good work the Knox County Health Department does every day," he said.

"I know they will do what needs to be done to ensure something like this doesn’t happen again. In the meantime, we will keep everyone updated on the missing vaccines as information becomes available."

As of Thursday, the department reported one in every 20 Knox County residents had received the first dose of COVID-19 vaccine.