Mayor Kincannon said, "We are confident that businesses want to keep staff, customers and students as safe as possible---and will in turn cooperate.” 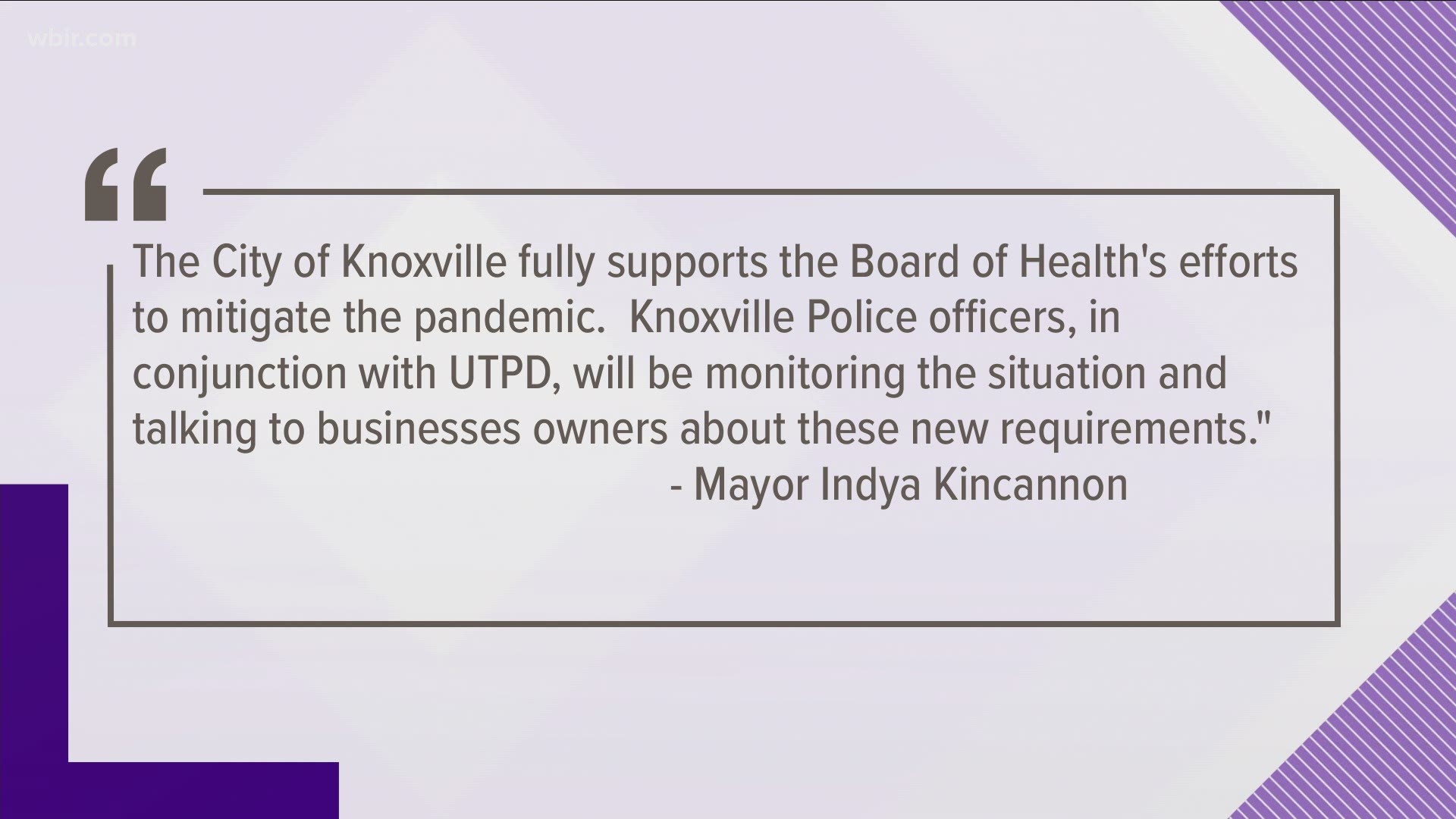 KNOXVILLE, Tennessee — Showing its support for an 11 p.m. business closure order, the city of Knoxville released Friday a letter it'll give to any bar or restaurant found to be in violation of the mandate.

Mayor Indya Kincannon, in a statement released with the letter, said the city "fully supports the Board of Health’s efforts to mitigate the pandemic. Knoxville Police officers, in conjunction with (the University of Tennessee Police Department), will be monitoring the situation and talking to business owners about these new requirements."

She added: "We are confident that businesses want to keep staff, customers and students as safe as possible---and will in turn cooperate.”

The letter released Friday details the requirement that businesses that sell on-premise alcohol must close at 11 p.m. and also lists other requirements such as table capacity limits as previously directed by order of Gov. Bill Lee.

One of the most significant paragraphs is the last.

It states that any business that violates the health board order faces a Class C misdemeanor that would also be forwarded to the Knoxville Beer Board for consideration. The beer board has authority over a business's ability to serve beer in the city.

The Knox County Board of Health, empowered to act in the pandemic, voted Wednesday to order businesses that serve on-premise alcohol to close by 11 p.m.

It takes effect Friday. It lasts at least through Oct. 1.

The vote was 8-1 with Knox County Mayor Glenn Jacobs dissenting.

The board moved, it said, to help stop the spread of COVID-19, especially in light of the presence now of UT students who are gathering at night at bars and restaurants.

Some businesses object to the mandate, saying it'll cost them money.

The board also voted 8-1 to pass a regulation that limits social gatherings to 25 people in an indoor area of 900 square feet or less.

It doesn't apply to private residences, churches, nursing homes or government buildings. But a new addition applies it to outdoor gatherings at establishments that serve alcohol. Dr. Patrick O'Brien cited large crowds outside of bars as the cause.

David Sanders, an attorney in the Knox County Law Director's Office who is advising the board, said the board's action was legal and defensible.