The Institute for Health Metrics and Evaluation projects the deadliest point of the virus would occur by mid-to-late April in Tennessee. 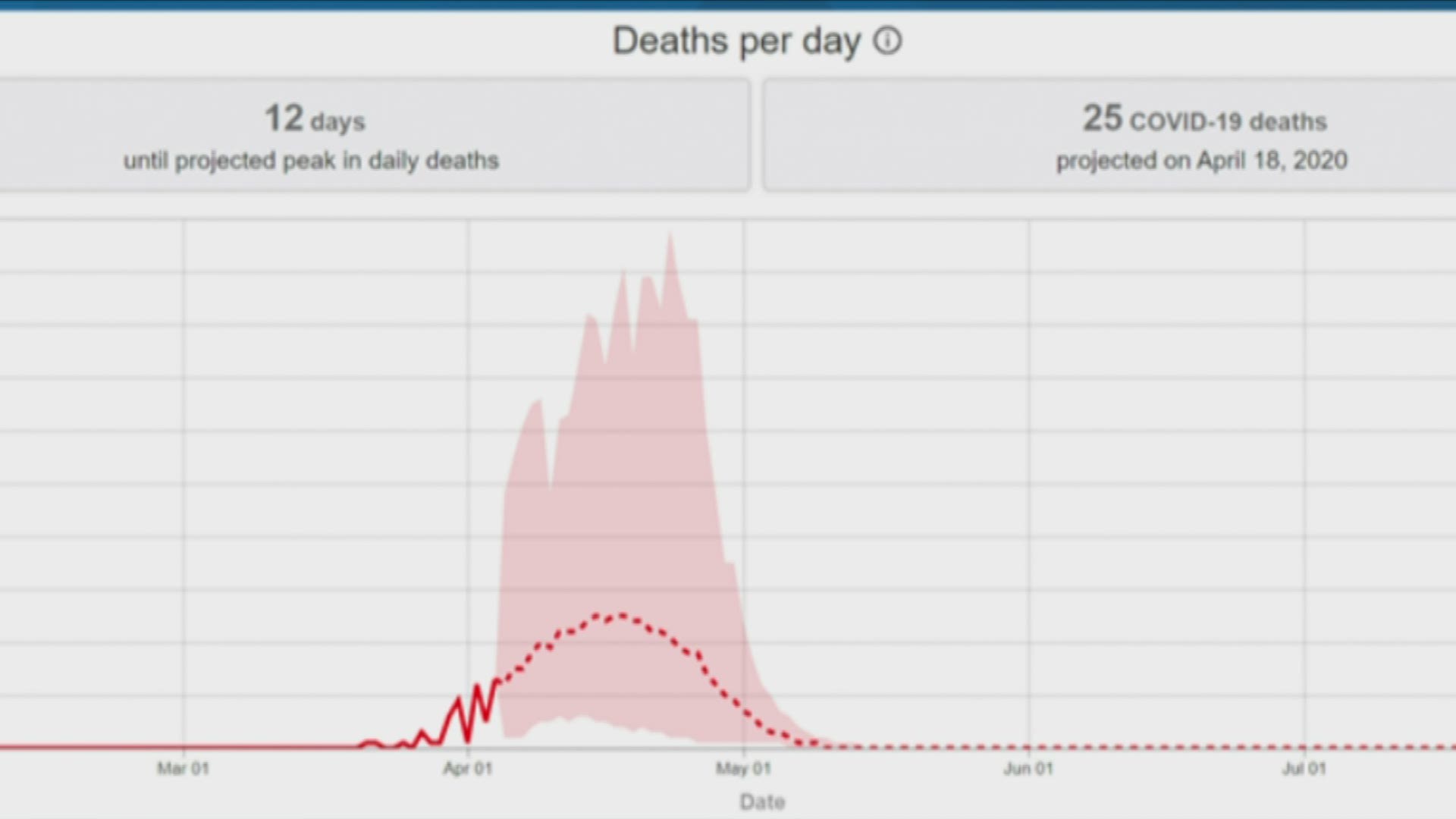 An institute creating projections used by the White House Coronavirus Task Force has updated its projections as of April 5, and now shows Tennessee may have acted in time to save hundreds of lives from COVID-19 before the end of the outbreak.

The Institute for Health Metrics and Evaluation (IHME), an institute that is part of the University of Washington, entered the headlines last week when Dr. Deborah Birx said 100,000 to 240,000 deaths in the U.S. from the coronavirus pandemic are possible if social distancing is maintained. Her statement was backed up by data and projections from the institute.

IHME has its forecast published on its website. The projections are broken down by state and include estimated hospital and ICU beds needed, deaths per day and total deaths. It is important to note the figures are being updated constantly, and can change drastically depending on the measures states take and their recently reported COVID-19 infection numbers.

RELATED: 3,633 confirmed cases of coronavirus in Tennessee, including 295 recoveries & 44 deaths

For Tennessee, that was the case after Gov. Bill Lee last week enacted Stay at Home orders and announced the state was working with the Army Corps of Engineers to build COVID-19 overflow sites in the state's most populous areas.

Currently, estimates for Tennessee still show the state is expected to reach the peak for deaths per day by mid-to-late April. However, the IMHE's most recent figures paint a far less stark portrait for the state than last week.

Tennessee's projected deaths per day flattened significantly -- though the range is highly variable between 4 and 91 deaths per day during the expected April 20 peak. Before Stay at Home orders were issued, the IMHE had previously estimated on March 30 there'd be 24 to 199 deaths daily during the same period. Below is a comparison of the two projections:

If no new infections are reported, the data estimates new deaths will taper off by mid-May. The total number of deaths projected in Tennessee is now far lower than it was prior to the Stay at Home order. As of April 5, the IMHE projects between 374 and 918 people could die to COVID-19 in Tennessee by May, compared to the March 30 numbers that projected there could have been between 2,500 to 4,100 total deaths from the virus.

Credit: Institute for Health Metrics and Evaluation
Timeline of projected total deaths to COVID-19 in Tennessee.

With the updated projections, hospital bed and ICU usage is also no longer expected to exceed the state's capacity. Tennessee lists as having close to 7,800 beds available, and previously usage needs were projected to be dire -- having nearly twice as many patients than hospital beds by the mid-April peak.

However, the latest April 5 numbers show the state is projected to have more than enough beds during the peak of the virus, as the number of projected hospitalizations is far lower.

RELATED: Vandy doc: 'We've got to flatten the curve!'

The latest numbers project Tennessee would need between 610 and 2,390 beds and 140 to 440 ICU beds during the peak, as well as 208 ventilators. Previously, the projections showed ICU beds needs were expected to be nearly four times the current 629 beds available.

Once again -- these numbers come with a caveat. The conclusion of the forecast says the numbers are "predicated on the enactment of social distancing measures in all states that have not done so already within the next week and maintenance of these measures throughout the epidemic." As time goes on, the models are updated with projections based on the latest reported statistics and measures states take -- which can alter those projections significantly.

In Kentucky, restrictive measures were taken to encourage people to stay at home, but as of April 5 a formal 'Stay at Home' order had not been issued. Numbers have shifted upward with the latest projections, but some are highly variable.

Deaths per day are now projected to peak in late-April and early-May between 4 and 166. Previously, the state was projected to see between 15 and 35 deaths at a later peak of mid-May.

Deaths from COVID-19 in Kentucky are expected to taper off in June, but are higher than previously reported. Projections now anticipate between 839 to 3,296 deaths.

Kentucky currently is projected to have more than enough hospital beds statewide to treat patients at the peak of infections, but there could be ICU bed shortages. The IHME projections here are highly variable -- the state could need between 333 and 5,289 hospital beds, 80 and 1,108 ICU beds, and 68 and 867 ventilators during the peak.

RELATED: LIST: What are essential & non-essential businesses during "Safer at Home" order