KCHD: Decision not to receive Pfizer vaccines in the future not related to missing doses

Officials the manufacturer uses tracking software on vaccine shipments, but that the tracking number did not work. 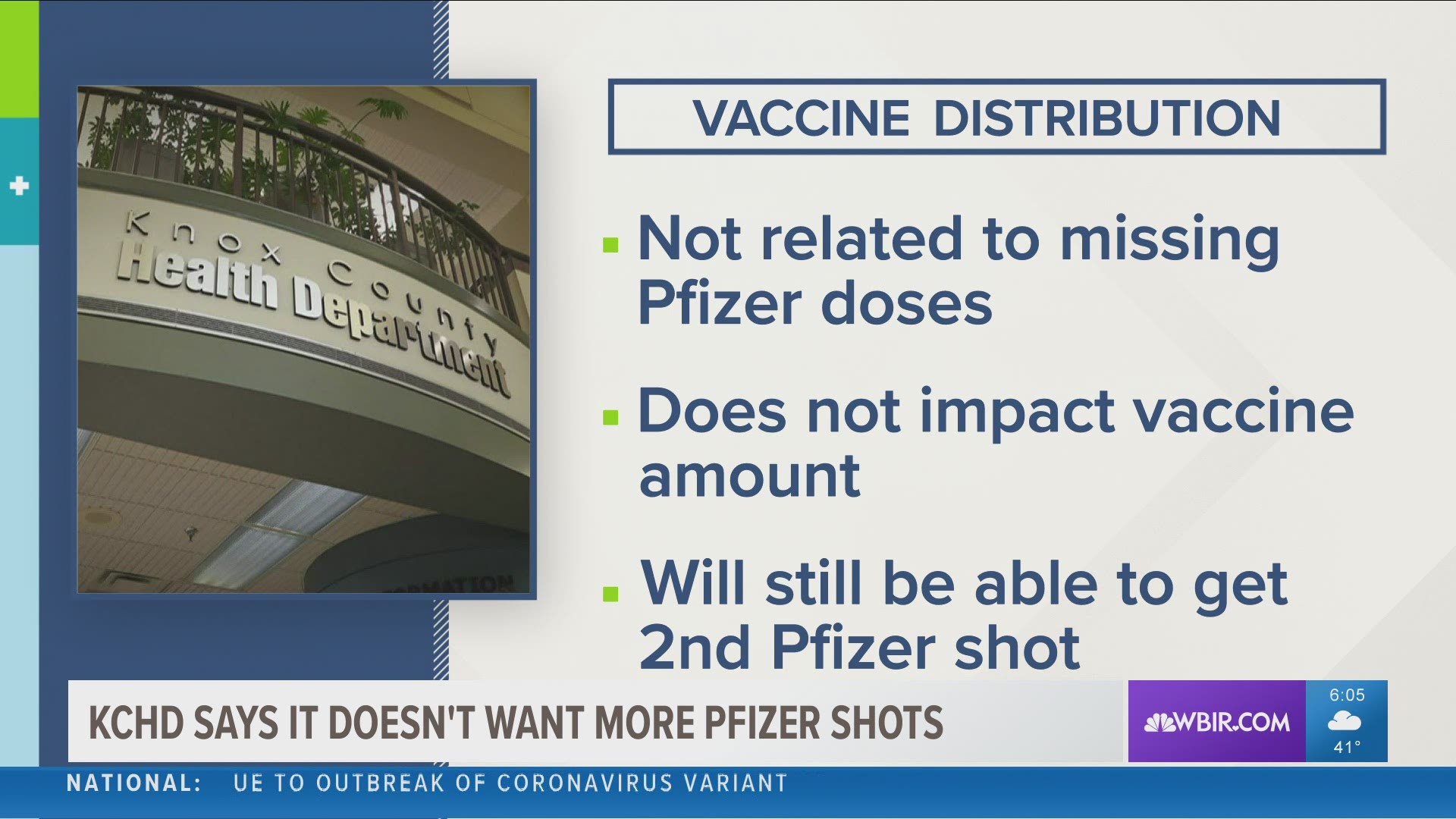 The Knox County Health Department said Thursday it is now not sure whether it ever received a box of nearly 1,000 COVID-19 vaccines that it previously announced went missing.

In a statement to 10News, KCHD said it received a shipping notification for the box in question, but "it contained an inaccurate/nonfunctioning tracking number."

It said the Tennessee Department of Health reported the box of vaccine had arrived, but that there was no documentation of delivery. If the box arrived, KCHD said it suspects it was mistaken for a box of dry ice and accidentally discarded.

"The box was opened, but it contained no packing slip, what appeared to be only dry ice, no GPS tracker and it did not have the normal vaccine container within," the KCHD statement said.

In a statement to 10News, vaccine manufacturer Pfizer said it is aware of this issue, but the box arrived safely at KCHD. They said that the order must have been signed for if it was delivered.

"This occurred after Pfizer safely delivered the vaccine within all specifications to the point of use facility, and the order was accepted," Pfizer said.

Moving forward, the Knox Co. Health Department said two employees will receive every box of vaccine and every shipping box, regardless of content, will be fully inspected before it is discarded.

In addition, KCHD will create calendar invites to advise when second doses should arrive and will check with county IT to ensure notification emails from the vaccine manufacturer are not being stopped by firewalls.

The state is working with the Knox County Health Department with the investigation of the incident.

"We believe this was human error and not intentional," the Tennessee Department of Health said.

In a statement to 10News on Friday, TDH said that Knox County has voluntarily elected to receive the other vaccine product and will not receive Pfizer vaccines in the future, with the exception of the second doses they will need to administer over the next three weeks.

KCHD said the change in its preference for the vaccine to Moderna would not impact the total number of vaccine doses sent to Knox County.

KCHD said the decision is unrelated to the missing 975 doses of the Pfizer COVID-19 vaccine. KCHD was asked if they had a preference on receiving Moderna or Pfizer, according to a statement to 10News.

According to TDH, KCHD's decision was made earlier this week, after reporting the discrepancy of the missing box to the state.

"Due to the ease of handling and storage of Moderna, coupled with the fact that it comes in smaller shipments (which allows our team to be more flexible in scheduling clinics) we said we would prefer to receive Moderna. This does not impact our allotment received by the State and has no bearing on the volume of vaccine that we receive," KCHD explained.

TDH added that their team reached out to KCHD and in effect, they have chosen the Moderna vaccine. TDH wants to make clear, "that choice was not any sort of punitive action, and again, is not the result of what occurred with the missing Pfizer doses."

The Knox County Health Department said Wednesday that 975 doses of the Pfizer COVID-19 vaccine appeared to be missing, saying it believes the doses were mistakenly thrown away.

Officials said Tennessee leaders confirmed that the doses were shipped to the Knox County Health Department. However, county health leaders said that they had no record of receiving the vaccines. Officials with the health department said that they received a shipment notification, but it contained an inaccurate or nonfunctioning tracking number.

The next week, a shipment of dry ice was delivered that was packaged differently than the box in question. Noticing a potential discrepancy, the health department reached out to state leaders to investigate.

The Tennessee Department of Health confirmed that the vaccines were shipped and delivered, but there was no documentation of delivery.

"At this time, it is believed that if the vaccines were received, they were inadvertently discarded as extra dry ice shipments," said officials.

KCHD Director Dr. Martha Buchanan was tearful when she announced the loss of the doses -- as each one is precious in this stage of the vaccine rollout due to the limited supply and critical protection they will provide to the most at-risk.

"It was a kick in the gut for all us," she said, adding that no foul play is suspected. Details on #WBIR: https://t.co/eb3mUTwqJF

"It was a kick in the gut for all us," she said fighting through tears. "We remain very committed to integrity and transparency, which is why we're here today."

The box of vaccines that disappeared was intended to be distributed as second doses for people who already received their first dose. KCHD said it will need to use vaccine doses that were originally set aside as first doses to make up for the loss -- saying they will still honor appointments for people who had them this week.

“This is something you certainly hope never happens and we are working with the State to determine how it did,” Buchanan said. “It is an unfortunate situation, but in the meantime, our vaccination efforts continue unabated.”

"KCHD was notified of the shipment of first-dose Pfizer vaccines, which are sent in unmarked boxes. That shipment was received as expected, but no shipment or delivery notification was received for the allotment of second-dose vaccines," KCHD said.#WBIR

Buchanan said, based on GPS data, it appears the doses were accidentally discarded. She said different types of insulated boxes arrive for the Pfizer vaccine -- one containing vaccine doses preserved with dry ice inside a thermal container, and another that typically arrives a day later containing just dry ice in case the doses aren't put in on-site cold storage and need to be kept in the shipping container for longer. She said the boxes look nearly identical, saying they are "kind of generic."

Buchanan said KCHD orders vaccines every week and it has received doses and dry ice shipments on regular intervals. Two weeks ago, KCHD said it received two shipments -- a group of the first-dose vaccine on Thursday, and another shipment on Friday that a team member believed was a dry ice-only shipment.

Based on the timing of the shipment and the similarities in the boxes, Buchanan said the team member discarded the box they thought contained just dry ice. However, once the second-dose vaccine shipment was reported missing, the team member reported what they feared happened.

"That's when the team member said, 'Oh goodness, maybe there was a second-dose shipment that I thought was dry ice," Buchanan explained.

Pfizer uses GPS-enabled thermal sensors to track the location and temperature of each vaccine shipment, so it is unclear how an error like this could occur. No misconduct is suspected, officials said.

"With the GPS tracking system, there should be a record of the package’s exact location and, by now, of a temperature excursion," officials said. "We have received no confirmation of either."

Officials said that the box was opened, but contained no packing slip, what appeared to be only dry ice, no GPS tracker and did not have the normal vaccine container inside of it.

Officials also said that the Knox County Health Department does not typically receive dry ice. The department reports its inventory to TENNIIS on a daily basis.

The department held a short-notice press briefing on Wednesday about the discrepancy. They said that 975 doses are equivalent to 1.7% of all vaccines distributed in Knox County.

They said that a calendar reminder will be created to advise when to expect second doses since no shipment notifications are received. The health department will also check with IT to ensure no Pfizer notification emails are being restricted by firewalls.

Vaccines will also always be received by at least two team members, and every shipping box will be fully inspected.

In total, more than 56,000 vaccinations have been administered.

Pfizer provided the following statement about the incident:

This occurred after Pfizer safely delivered the vaccine within all specifications to the point of use facility, and the order was accepted.

Pfizer ships whatever order quantity a certain location asked for, and monitors the temperature and routes of the vaccines throughout the shipment process. Once the vaccines are received and accepted by the point of use facility, the facility is responsible for monitoring the temperature or location.

Pfizer has a 99.99% success rate in getting shippers containing our COVID-19 vaccine to their destination within all our prespecified parameters.