Alcohol curfew to start on Friday in Knox County, sales of alcohol to stop at 11 p.m.

It doesn't matter if it's a bar, restaurant or gastropub: the last call for alcohol will be before 11 p.m. now for all establishments across Knox County. 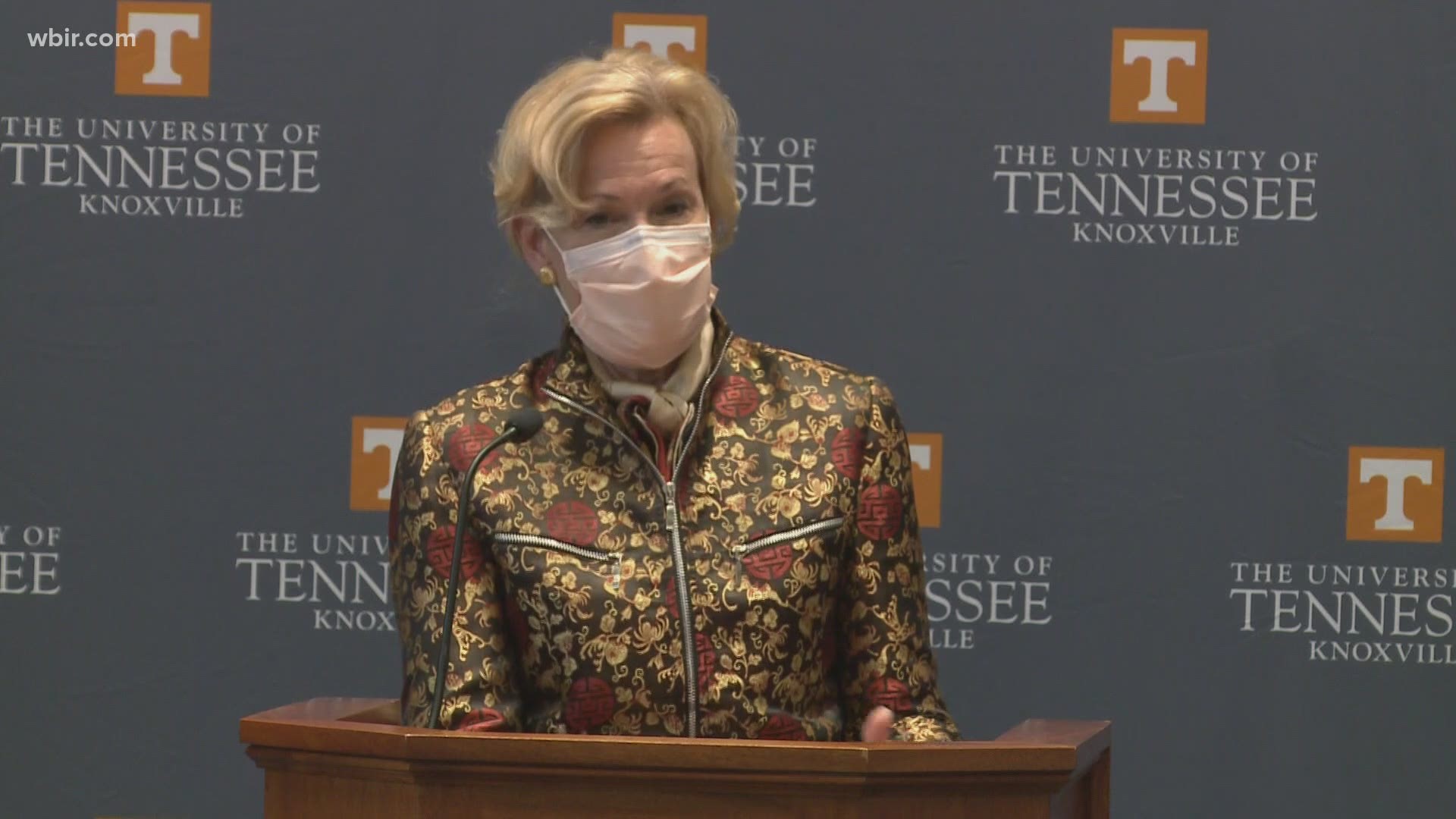 KNOX COUNTY, Tenn. — Knox County is implementing a more aggressive alcohol curfew starting Friday to include any and all establishments that serve drinks on-site, not just bars.

The Knox County Board of Health voted 8-1 Wednesday to approve a new regulation that will implement a curfew requiring all bars and restaurants that serve alcohol to close their doors to customers no later than 11 p.m.

The new curfew goes into effect Friday, Sept. 18 and lasts through Oct. 1, at least.

The original draft proposed a 10 p.m. curfew, but the board voted 6-3 to amend it to an hour later to minimize the impact on a large number of restaurants that stay open to around 11 p.m. The board also amended wording in the regulation to specify businesses serving alcohol need to close at 11 p.m.

The move upset dozens of businesses who say this will negatively impact thousands of employees.

The board also voted 8-1 to pass a regulation the would limit social gatherings to 25 people in an indoor area of 900 square feet or less.

It doesn't apply to private residences, churches, nursing homes or government buildings. But a new addition applies it to outdoor gatherings at establishments that serve alcohol. Dr. Patrick O'Brien cited large crowds outside of bars as the cause.

Before the vote, Knoxville attorney Greg Isaacs sent a letter to the Board of Health and Knox County Mayor Glenn Jacobs asking them to table the proposal, informing them his firm is representing dozens of popular restaurants and dine-in businesses that serve alcohol in the county that collectively say the measure will negatively impact their businesses.

“The draft resolution goes well beyond the authorities set forth by Governor Lee’s Executive Order of May 22, 2020 and is not reasonably tailored to effectuate a legitimate governmental interest,” he said. “The proposed resolution is unconstitutionally overbroad and vague and raises significant due process concerns, completely denying affected parties the opportunity to provide input to the Board.”

The letter asked the board to table the resolution until restaurant owners are able to have an opportunity to address the board on the implications and explore the legality of the action.

Board members addressed the letter during the meeting. Knox County Chief Deputy Law Director David Sanders said he was not necessarily concerned with what he saw.

"Any action this board takes I think is legal and defensible," Sanders said.

During the board meeting, Mayor Jacobs was concerned with the economic toll the measure would take locally on businesses still dealing with the impact of the initial shutdown.

"Looking at the economic impact, all of these bars and restaurants are running on very thin margins," Jacobs said, warning the board it's clear there won't be federal aid to help businesses absorb the impact this time around.

He said he believed house parties remain more of a concern than bars, citing highlights from their recent meeting with Dr. Deborah Birx with the White House Coronavirus Task Force. He also worried about the enforcement of such measures and its burden on police and deputies.

Knoxville Mayor Indya Kincannon said there's a conundrum to be solved with minimizing the economic impact since data has shown that greater infection rates cause greater economic impacts. However, experts also said that efforts to reduce spread itself also will cause economic impacts.

"We need to treat UT student infection rates the same as any Knoxvillian," she said. "Now is the time to take further action to mitigate further suffering and economic hardship because people are getting sick. We don't want UT or schools to close over this."

The Knox County Sheriff's Office and Knoxville Police Department said Wednesday that neither issued citations for masks or bar curfew violations in the months the regulations have been in effect.

"Mainly what we have focused on thus far has been education, because we're still trying to find the definition of what a 'bar' is," Police Chief Eve Thomas said, saying KPD needs a clearer definition in order to enforce such curfews.

The new curfew does just that -- making it clear this specifically applies to any establishment where alcohol is bought and consumed in the same place.

Thomas said they couldn't define what a bar was so they got creative with other measures. She says if they have a concrete definition, they can write a citation. #WBIR

"We will do our job as compassionately as we can, but it's our job to enforce laws as passed by bodies like [the Knox County Board of Health]. I have concerns on both sides, but I will enforce whatever you decide," she said.

The curfew does not apply to carry-out alcohol sales at stores. It also does not apply to nursing homes or long-term care facilities, places of worship, or any place owned and run by the U.S. government or the state of Tennessee.

"Local health officers confronted with an epidemic [have] the power—indeed, the obligation—to ‘[e]stablish appropriate control measures which may include examination, treatment, isolation, quarantine, exclusion, disinfection, immunization, disease surveillance, closure of establishment, education, and other measures considered appropriate by medical experts for the protection of the public’s health," the regulation reads, citing Tennessee law and Governor Bill Lee's executive orders in place.

The board said it is not planning on taking actions that far, but can't rely on simply warning and educating people alone -- saying it has clearly been ineffective.

"We need to follow up with enforcement, and do what we say we're going to do," Chief Thomas said.

Before the vote, Knox County's curfew applied primarily to just bars that didn't serve food. Many of the establishments were seen disregarding social distancing guidelines and attracting many people, though. They said they considered themselves "bars and grills," which the curfew formerly did not apply to because these businesses claimed at least 50% of sales came from food rather than alcohol.

Souza says there is evidence that does support if you are in restaurants or bars that you are more at risk. #WBIR

The BOH recognized it was difficult to impossible to enforce the original "bar curfew" for any establishment that served food in a legal sense, even if they derived nearly all of their sales from alcohol.

The measure was drafted on the advice of the White House Coronavirus Task Force after it identified Knox County as one of many counties in its "Yellow Zone" with high new case counts and concerning COVID-19 positivity rates between 5% and 10%. Since the report was drafted, Knox County has found itself back in the "Red Zone" above 10% -- which prompted another visit from Dr. Birx Tuesday.

On Tuesday, Knox County reported 225 new cases of COVID-19, the highest single-day count since the start of the pandemic. Active cases have once again risen above 2,000 for the first time since early September. New deaths and hospitalizations have been fluctuating in the past few weeks, with some days seeing fewer hospitalizations and no deaths, and others seeing jumps in concurrent hospitalizations and multiple deaths.

ICU usage in Knox County for COVID-positive patients increased slightly in late-August and has hovered around 45 since.

UT Chancellor Donde Plowman said the number of active cases at UT is now trending down, but only after sending hundreds of students exposed to COVID-19 positive people to isolate in hotels and a designated "isolation dorm" on campus.

"We know it's going to go back up again," she said, saying she's concerned with the high number of isolated students.

The board reported UTK students on average have about 20 close contacts with someone who had COVID-19. The general community comes in contact with a much fewer number of people, at around 4 to 6 close contacts.

After the University of Tennessee began the fall semester in mid-August, a number of bars and restaurants serving alcohol near campus have been seen packed with people shoulder-to-shoulder and not wearing masks. Dr. Birx dubbed these, along with house parties, "super-spreader" events that pose a severe risk for asymptomatic spread of the disease across the community and within people's circle of family and friends. She said high levels of asymptomatic spread in healthy adults and children poses a very real silent threat to the many people at risk of developing serious, life-threatening symptoms from COVID-19.

"I was not happy with what I saw near campus. I saw large crowds in the strip area with bars blatantly open telling patrons they were going to stay open until 2 a.m.," board member Dr. Patrick O'Brien said.

Dr. Deborah Birx and the task force held a round table session at the University of Tennessee Tuesday with local leaders to discuss strategies the community could take to more effectively lower the number of new daily cases. She said the task force has seen promising results nationally, with cities implementing alcohol sale curfews. She also said it gives public health officials a better way to enforce guidelines through local health codes.

The Board of Health on Wednesday also decided to continue mandating face coverings for the foreseeable future following positive input from city, county and UTK leaders.

Dr. Buchanan said there is no "easy answer" for determining when the mask mandate could be lifted, citing wide uncertainty with case spread. Even after a vaccine is available, she believes it will take some time after a certain percentage of people are inoculated against the virus.

She believes they will also need a few weeks to observe when case counts drop off across the board to safely say masks are no longer necessary.

Knoxville Mayor @indyakincannon is speaking to the board now. She applauds the mask mandate.

She says KPD is there to enforce of all board of health regulations. Chief Eve Thomas also says they're there ready and willing to help. #WBIR