KPD says that the vast majority of bars and restaurants are complying with the BOH curfew. 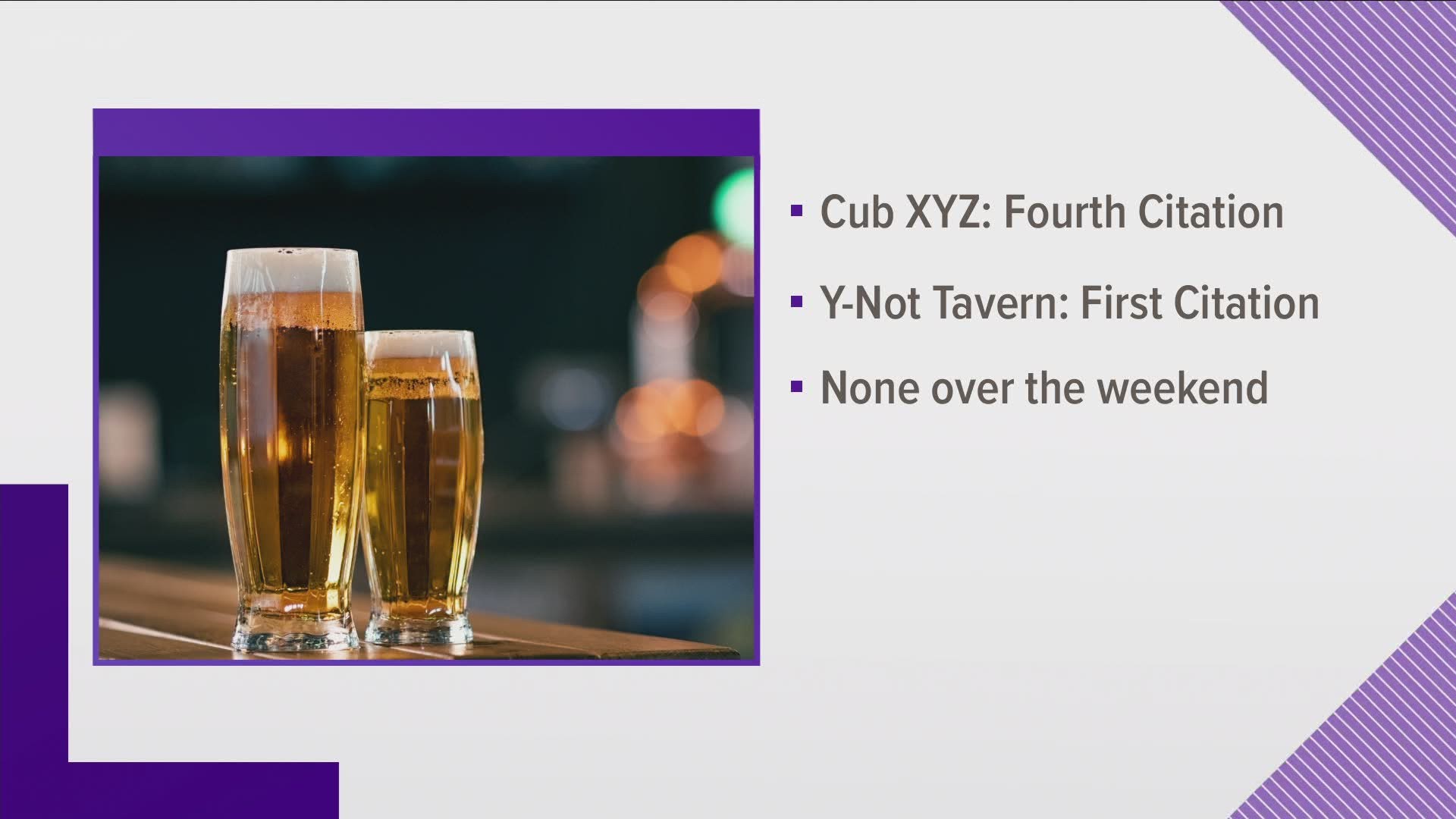 According to KPD, on February 3, Club XYZ received its fourth citation.

No citations issued over the weekend, KPD said.

UPDATE February 1, 2021: The Knoxville Police Department's Inspections Unit issued one citation for failing to comply with the Board of Health's mandated 11 p.m. curfew.

According to a report, Billiards and Brews received its 18th citation on Thursday.

There were no other citations issued over the weekend, police said.

UPDATE January 25, 2021: The Knoxville Police Department's Inspection Unit issued a total of five citations over the weekend for failing to comply with the Board of Health's mandated 10 p.m. curfew.

According to a report, three citations were issued on January 21.

Billiards and Brews and Paul’s Oasis were also cited on January 22.

UPDATE January 18, 2021: The Knoxville Police Department's Inspection Unit issued a total of three citations for failing to comply with the Board of Health's mandated 10 p.m. curfew on January 15.

According to a report, the three businesses cited were Billiards and Brews, Paul’s Oasis, and the Double S Wine Bar.

There were no additional citations issued for curfew violations over the weekend.

UPDATE January 11, 2021: A Knoxville bar received its 14th citation for violating the city's 10 p.m. curfew, according to the Knoxville Police Department.

Officers from the KPD Inspections Unit issued a total of five citations this past weekend, which is meant to help curb the spread of COVID-19.

Billiards and Brews has now received 14 citations for violating the curfew, with additional citations on Saturday and Sunday. Its owner told 10News last month that he didn't believe the curfew was legal and that he was just trying to make sure his workers could earn a living. He said he had no intention of altering his business hours.

Club XYZ received its second and third citations over the weekend. It was previously cited on Jan. 2.

"The KPD and the City of Knoxville continue to appreciate that the vast majority of businesses have remained compliant with the Board of Health curfew without the need for law enforcement intervention of any kind," said KPD spokesperson Scott Erland.

The city could suspend the beer licenses of businesses that violate the curfew.

UPDATE Dec. 15, 2020: The Knoxville Police Department issued a total of four citations for failing to comply with the Board of Health's mandated 10 p.m. curfew.

Three citations were issued on December 11.

Polices said the three businesses that were cited were Billiards and Brews, Paul’s Oasis, and Just 1 More Bar and Grille on Kingston Pike.

Billiards and Brews was cited on December 12.

Eric Vreeland with the city of Knoxville said a pre-hearing conference in front of a Beer Board officer has been scheduled for Billiards and Brews as well as Paul's Oasis due to both defying city ordinances despite repeated warnings and citations.

The city had initially requested the two to have its beer licenses suspended for 30 days plus pay a $2,000 fine for each of its first three violations. It is now seeking to increase both of those penalties.

The pre-hearing conference has been scheduled for January 11, and the city said it intends to present evidence to support its request for each to have its licenses suspended for at least 45 days and pay $3,000 per violation plus court costs. The city said the suspension would last until the two agree to comply with city ordinances and the Board of Health's pandemic regulations.

"The vast majority of bars and restaurants are complying with the Board of Health curfew. The city's goal is to safeguard public health and help stop the spread of COVID-19 by enforcing the Board of Health regulations, not to assess fines or suspend the beer license of any businesses," Vreeland said.

PREVIOUS STORY: The Knoxville Police Department on Monday released the names of five businesses cited over the weekend for failing to comply with a COVID-related curfew.

The department's Inspections Unit cited four on Friday and one on Saturday, according to department spokesman Scott Erland.

According to Erland, the unit conducted about 100 compliance checks on businesses in the city over the weekend.

All businesses that were ticketed were cooperative, according to Erland.

"The KPD appreciates that the vast majority of businesses covered by the Board of Health curfew were compliant and did not require police intervention. We anticipate that our educational efforts and any subsequent enforcement actions will result in continued voluntary compliance from local businesses," KPD's statement Monday reads.

By order of the Knox County Board of Health, businesses that serve alcohol are supposed to close at 11 p.m., part of an effort to slow the spread of COVID-19. Some, however, have not been complying, and Mayor Indya Kincannon has pressed to ensure businesses are more compliant.

In extreme cases, a business could lose its beer license for failure to comply.

KPD spokesperson Scott Erland said the department is not naming specific businesses at this time.

By Board of Health order, bars and restaurants are supposed to close in-person service by 11 p.m., though they can still provide delivery, carryout, and curbside pickup.

While many businesses were abiding by the curfew, others were not, and city leaders wanted to find a way to enforce the order that didn't require criminal penalties.

The emergency ordinances went into effect immediately after the council voted on them on Wednesday night.