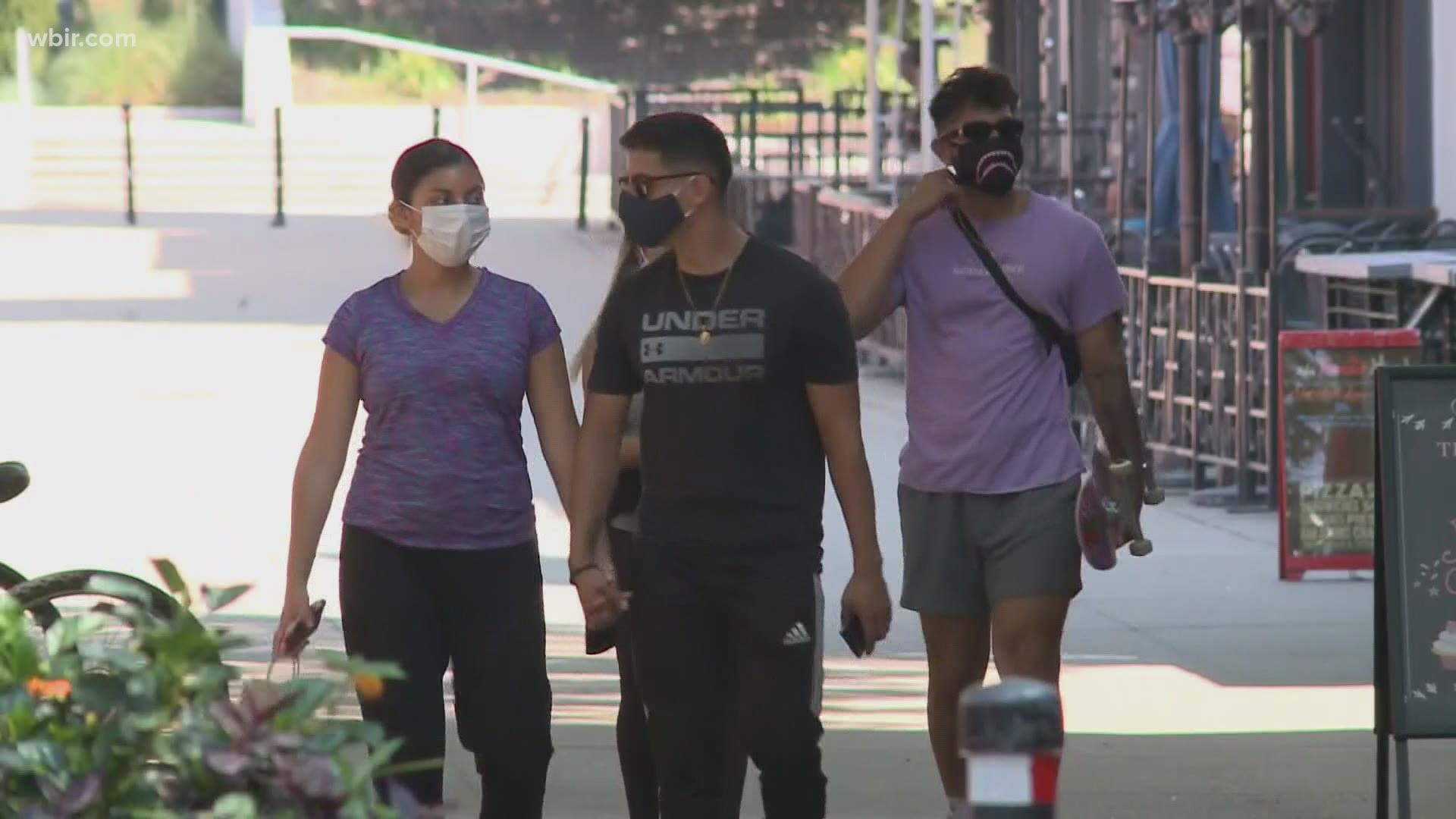 KNOXVILLE, Tenn. — Knox County Mayor Glenn Jacobs' declaration ending the mask mandate aside, the city of Knoxville will continue to require that masks be worn in all city facilities and at large events on city properties, Mayor Indya Kincannon said Wednesday afternoon in a brief statement.

"I am thankful to see that more than 40 percent of people in Knox County have received at least one dose of the COVID-19 vaccine. Things are moving in the right direction and we are constantly reevaluating our local situation in accordance with CDC guidance," the statement sought by WBIR reads.

It continues with a reminder that getting a COVID-19 vaccine is "the best way to overcome this pandemic."

Jacobs' announcement Tuesday afternoon that he was lifting a county mask mandate spurred confusion, questions and clarifications about how government agencies would proceed going forward.

Early Wednesday, Jacobs' chief of staff, Dwight Van de Vate, issued a note for "staff and directors" in the City County Building, the downtown government building where Jacobs and hundreds of city and county employees work.

"Some of the other tenants in the building, including those from the City of Knoxville and the court system continue to prefer that masks be worn. Considering that, PBA has left a mask requirement in place for the common areas of the building (elevators, hallways, mezzanine), and we ask that all county employees comply with the request. Should PBA’s requirement change, we will let everyone know as quickly as possible."

The public also has been required for months to wear a mask when entering the building.

Lee also said major metro counties such as Knox should consider ending their restrictions by May 28.

The Mayor's Office said Wednesday that Jacobs and Van de Vate "met with (Health Department Director Dr. Martha Buchanan) and spoke a number of times with her about the mask mandate before a decision and subsequent announcement was made."

The mayor also checked with the law department, according to the Mayor's Office, and it determined "the decision to lift the mandate rests with the mayor."

The mayor didn't address what officials have previously said was Buchanan's authority to keep a mask mandate in place. The Health Department said Tuesday it was still seeking clarification on what Lee's moves meant for Knox County.

WBIR asked local attorney T. Scott Jones to go over the governor's orders that made this declaration from the mayor possible.

Per Order 80 issued by Governor Lee on Tuesday, the six metro counties with their own independent health departments would no longer hold the power to enact pandemic-era health decisions. That includes Knox County.

On Wednesday, KCHD said Dr. Buchanan was informed of the mayor's intention to end the mask mandate. Buchanan would have liked the face covering regulation to continue longer as discussed at last week’s Advisory Board of Health meeting, the Health Department said.

"We understand the interpretation is that the Mayor had the authority" to end the mask mandate, according to a KCHD spokesperson.

KCHD stressed that the local situation is much better now than it was a few months ago, but that COVID-19 is still present in the community. More people should be vaccinated until the threat subsides, KCHD said.

That means recommending businesses and the general public follow CDC guidance (including industry-specific guidance), practice the Five Core Actions and get vaccinated. Our social media platforms and pandemic-focused webpages will be updated with more information and guidance for the public in the coming days," said the KCHD statement.

Both city and county workers operate throughout the multi-level City County Building in downtown Knoxville. Most courts also operate there, and the state Supreme Court has continued to impose restrictions inside all courts.

Knox County jurors were being selected Wednesday morning for a trial in a socially distanced manner with the mask rule in place. In another court, masked jurors were hearing proof in another case.

The note continued: "As the Governor stated yesterday, Tennessee has done a remarkable job in taking the pandemic from a public health crisis to a managed health condition. It is not, however, over. It remains incumbent upon all of us to be diligent in following the guidance offered by federal and state authorities, as well as the Knox County Health Department. The Health Department continues to do exceptional work under difficult circumstances, and we all owe them a debt of gratitude."

More "guidance" likely will be forthcoming, the chief of staff wrote. 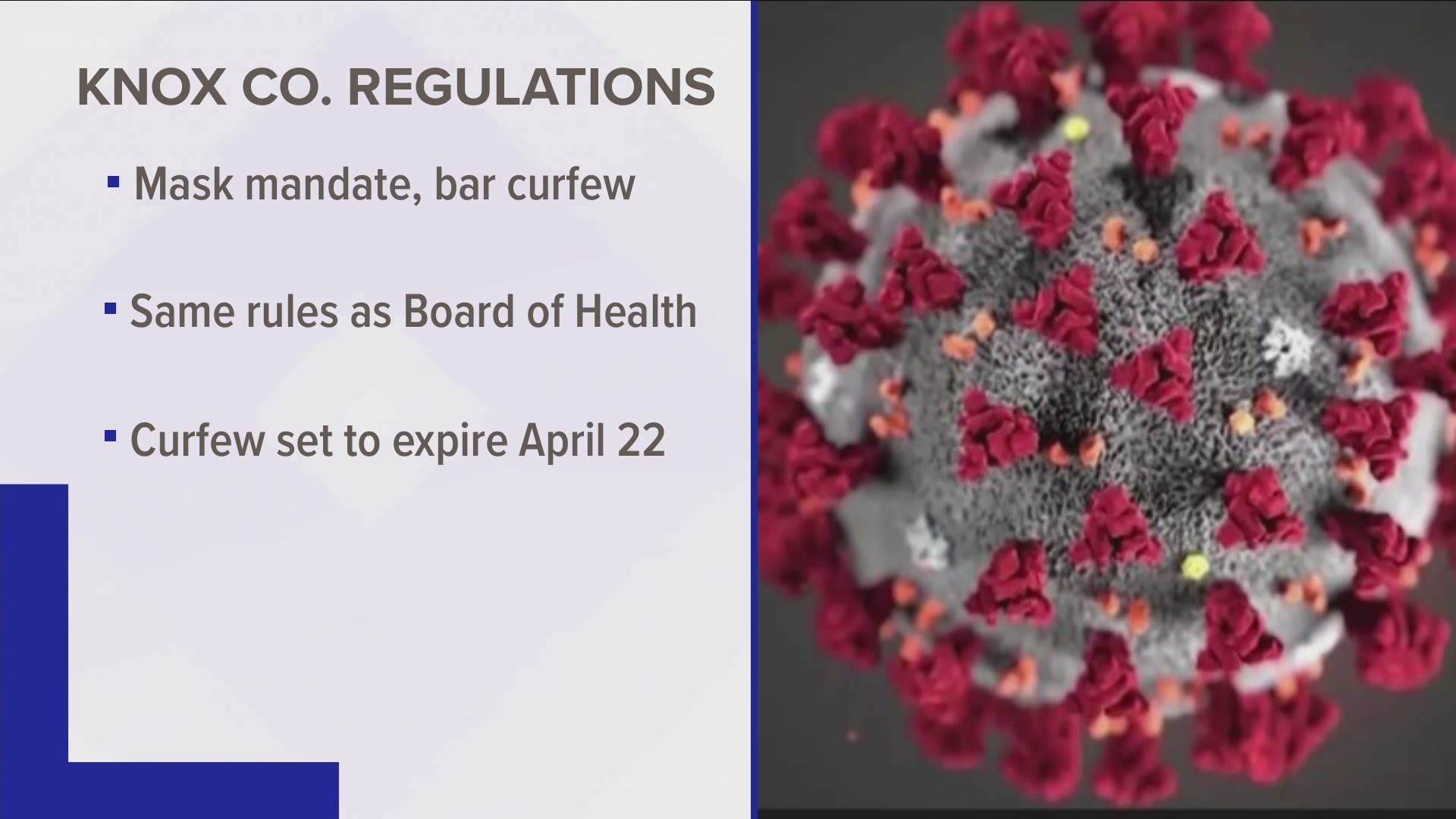 In his announcement Tuesday, Jacobs noted businesses can continue to impose a mask mandate as they see fit. Knox County Schools also controls its own fate in dictating the use of masks for students and staff, Jacobs noted.

The school system had a mask mandate in place through the summer. The school board will review its stance Friday in a specially called meeting, according to a Wednesday announcement.

A spokesperson for the Knox County Public Library system said masks will no longer be required at library locations, but will be encouraged.

A Knoxville Police Department spokesman said Wednesday that officers and employees are required to wear masks while doing work on behalf of the city.

"While that policy remains in effect for all City of Knoxville employees, the expectation is that officers will continue to practice the five core actions, which includes wearing a mask when physical distancing is not possible," Wednesday's statement from Scott Erland reads.

Knox County Sheriff's Office spokesman Kimberly Glenn said Wednesday deputies have discretion about wearing masks. If a business requires it when they enter, "they will abide by their policy," Glenn's email reads.

Also Wednesday, the town of Farragut announced it was lifting COVID-related restrictions at Farragut Town Hall and the community center based on Lee's recommendations.

"As of today, April 28, masks are now optional in town facilities, and town meetings will be held in person," the town announcement states. 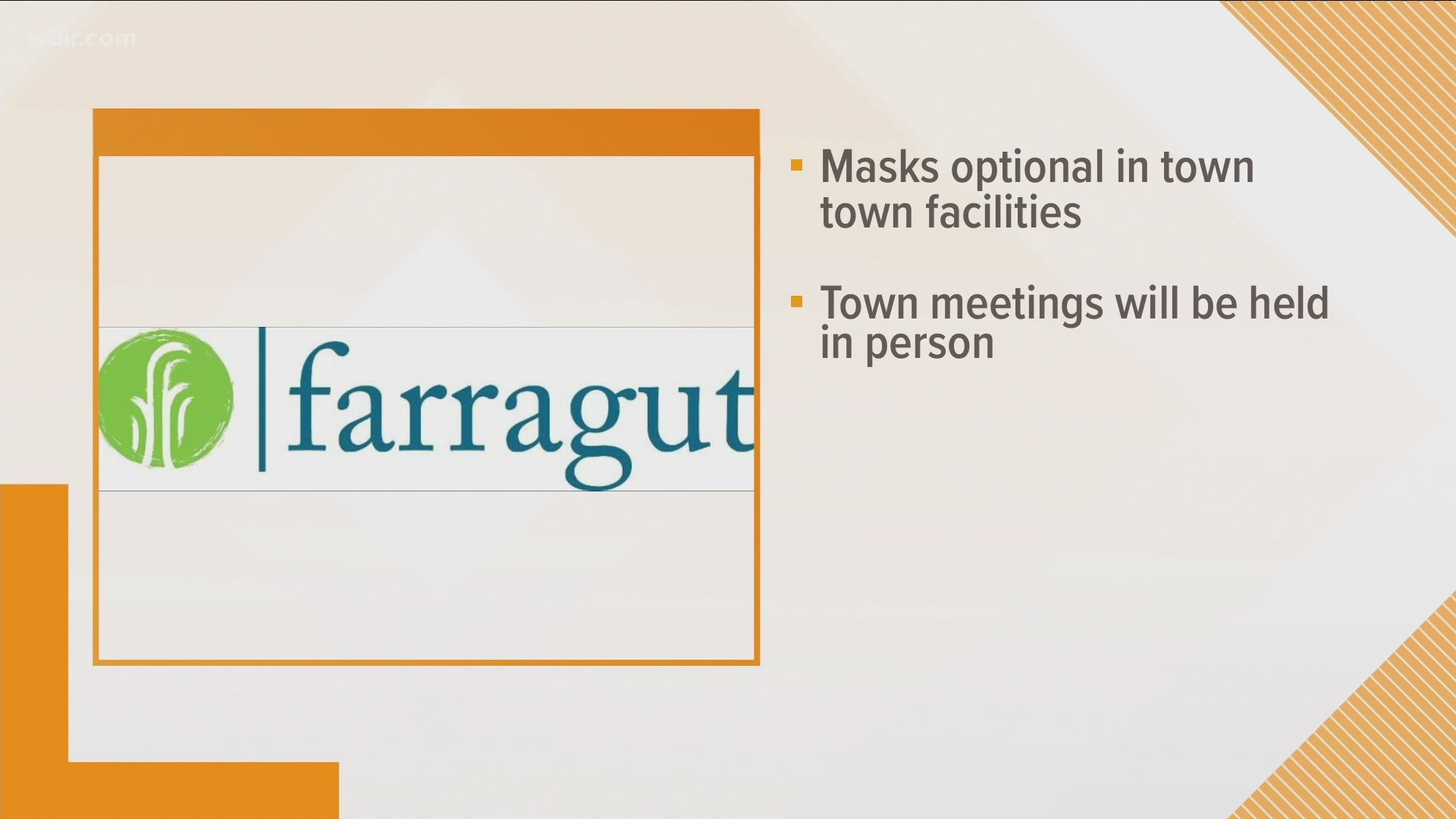