Tennessee has reported four times as many positive COVID-19 tests as Kentucky. Why is that?

University of Tennessee researchers said there are several possible reasons for the disparity, including population distribution, testing and state-level responses. 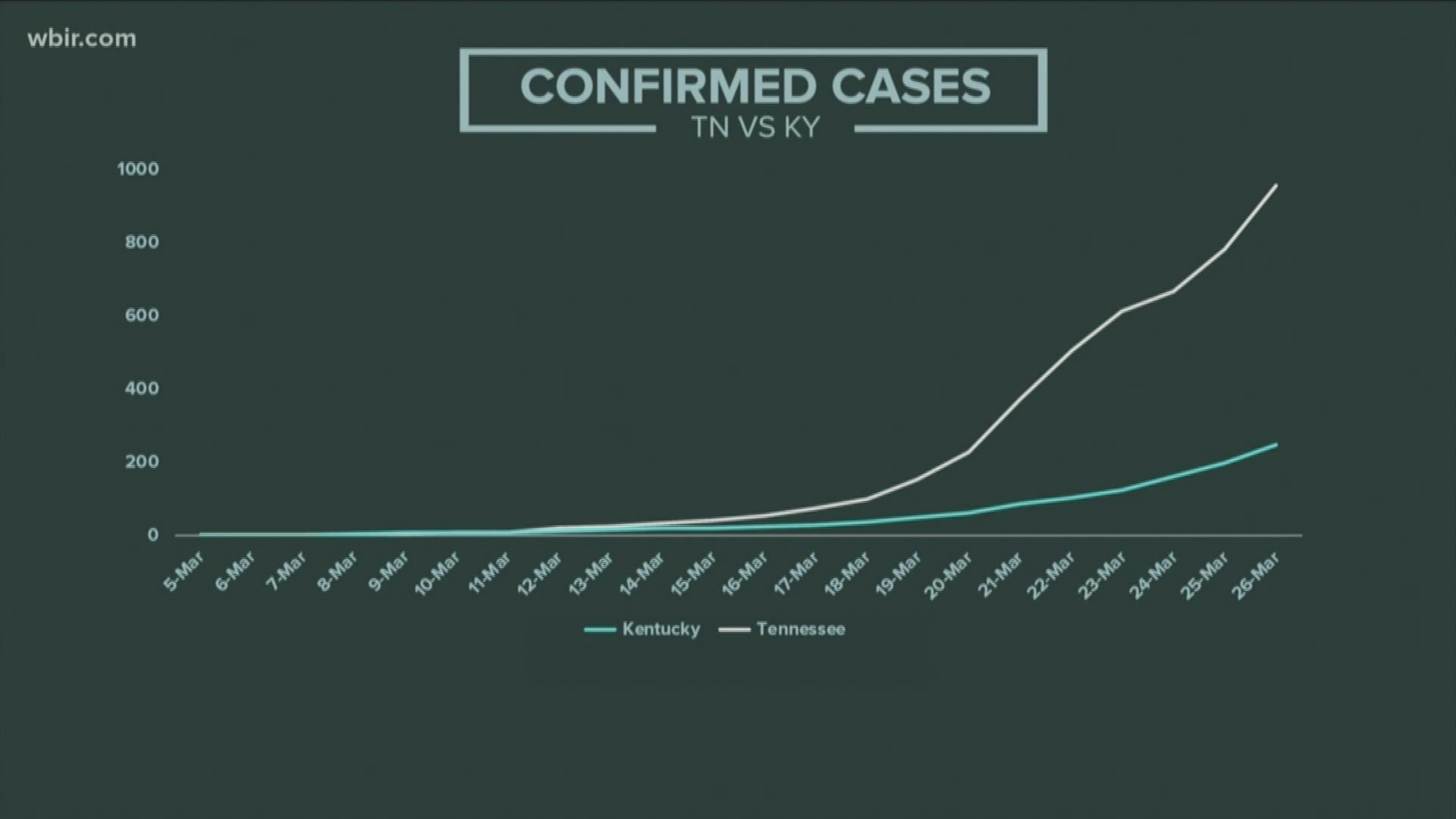 KNOXVILLE, Tenn. — On Friday, the Tennessee Department of Health confirmed there were 1,203 cases of coronavirus in the state.

In Kentucky, state data shows 302 tests for COVID-19 have been positive. That's a fourth of the total cases in Tennessee.

On Thursday, Gov. Andy Beshear called out Tennessee while talking about states without the same "restrictions and commitment" as Kentucky.

"If you simply drive over the border to another state and have all the contacts we're trying to stop, you frustrate the sacrifice of those in your community," he said. "The health and the lives of numerous Kentuckians depend on it."

New research from the University of Tennessee suggests there are multiple reasons, including state-level response, for the disparity in confirmed cases.

"It's not a simple comparison between two states having two different numbers of infections," said Dr. Kathy Brown, director of the University of Tennessee's Master of Public Health program. "You have to look at what's behind those numbers and what is behind the strategies or the ways in which we generate those."

RELATED: Judge orders KY woman with coronavirus to stay at home after she refused to self-isolate

First, Dr. Brown and a team of researchers looked at the population distribution of the two states.

Based on 2019 population estimates, Tennessee is nearly 33 percent larger than Kentucky. Tennessee also has a greater population density and urban population.

"When we think about urban populations, we think about people being closer together," Brown told 10News. "That may facilitate transmission have the infection spread more easily."

Testing capabilities of the two states also influences the number of confirmed positives.

As of data available on Wednesday, the Coronavirus-19 Outbreak Response Experts (CORE-19) found Tennessee had conducted an estimated 11,796 tests, or about 164 tests per 100,000 residents.

"Initially, what we saw was a higher rate of testing in the state of Tennessee," Brown said."

RELATED: 'This is one that makes me mad' | Person who attended coronavirus party just tested positive, Kentucky governor says

RELATED: 'We need to do more' | Physicians say shelter-in-place order would save lives

Kentucky and Tennessee's state-level responses and government actions could also have an impact.

Hundreds of physicians across Tennessee have written to the state's governor saying stricter measures like those in Kentucky could save lives.

"The only piece of ammunition we have is to decrease transmission in the community," said Dr. Elise Denney, president of the Tennessee Medical Association. "We can kill the virus if we stay home."

In general, Tennessee has been slower to issue statewide guidance.

"Kentucky issued a state of emergency almost immediately following the first case of COVID-19," Brown said. "In Tennessee, we had a more delayed response following our first case."

Many of the decisions have also been left up to local jurisdictions, Brown said.

RELATED: 10Listens: How do Tennessee and Kentucky compare in their response to COVID-19?