On Friday, the state will release a nursing home list with positive cases and deploy a mass testing effort for staff at two correctional facilities. 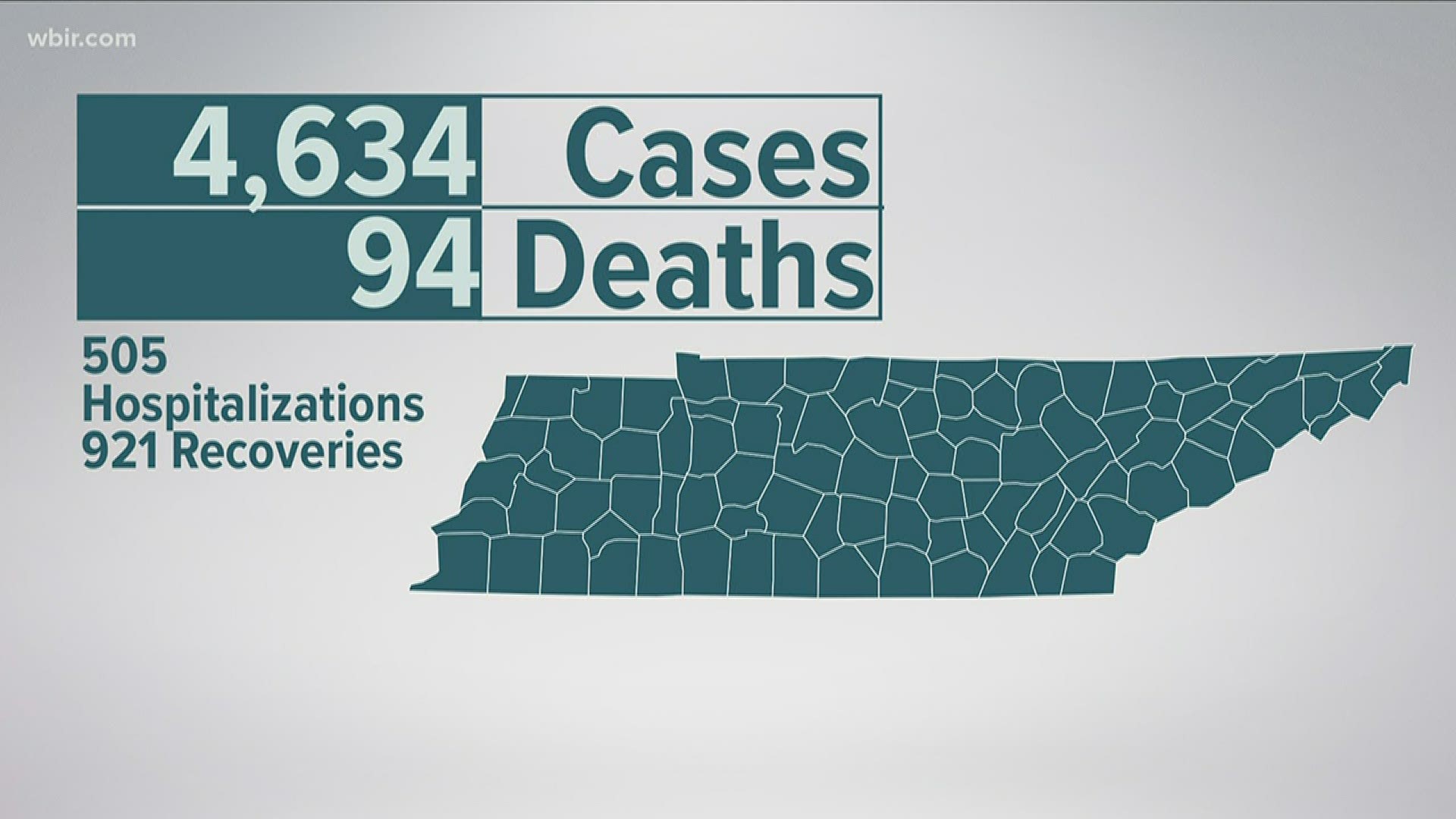 TENNESSEE, USA — As of Thursday, April 9, there are 4,634 confirmed cases in Tennessee with 94 deaths and 921 recoveries.

During the state's daily briefing, Governor Bill Lee said the state's team is working every day to make sure every community has adequate access to Personal Protective Equipment (PPE).

He said the unified command group has made over 1,300 shipments of PPE to all 95 counties to aid those working on the frontlines of the COVID-19 pandemic.

RELATED: 4,634 confirmed cases of coronavirus in Tennessee, including 921 recoveries & 94 deaths

Lee stressed the need to continue to secure PPE in the midst of national shortages. On Wednesday, he signed Executive Order 25, which extended actions to keep dental clinics closed and stop elective procedures until after April 30.

He also praised the statewide testing effort, saying they are not aware of any testing facility turning away people if they qualify for a test. Though resources for more rapid Abbott testing are limited at this time, he said testing is still available at every county health department.

Lee also invited the Tennessee Board of Education to provide updates on emergency legislation passed to help educators and students across the state as they continue to learn from home.

During the briefing, Dr. Lisa Piercey, the Tennessee Commissioner of Health, announced improvements in race reporting data, which are available on the health department's website.

As of Thursday, there are updates to age reporting data, which is also available on the department's website. She reported that 80 percent of deaths in Tennessee are in the 60+ age range.

Dr. Piercey also dedicated some discussion to the way the state is using models and data to make decisions.

"Models vary widely. They're just that, they're predictions based on, usually, historical data, and when we're looking at our planning efforts, we are looking at many, many data points," Dr. Piercey said.

The most important is what is gathered on the ground by communicating with hospitals, according to Dr. Piercey.

"I can guarantee that every single day, I knew and all the other hospital administrators know what their resources are that day and what they can leverage if they need to surge," Dr. Piercey said.

She said it is important to look at all the models as data points and not rely on one exclusively.

Dr. Piercey stressed that they are still preparing for a surge. The department just does not know when it will come or how large it could be.

The department will be publishing a list of nursing homes and other long-term care facilities based on a new requirement from the state mandating that these facilities must report when there are two or more confirmed COVID-19 cases among residents or staff.

"This does not indicate any kind of wrongdoing. These are just facilities that have had positive cases," Dr. Piercey said.

Dr. Piercey emphasized that testing will be among staff, and there have been no confirmed cases among inmates.

"We have had positive staff as well as positive exposures in both of these facilities," Dr. Piercey said. "Interestingly, we identified this link through our very robust contact tracing methodology."

She said national guard partners will be mobilized to help with the high volume of tests being administered. It will be a few days before the test results are returned.

With the state's Safe At Home order deadline on April 15 looming, Lee said there will be an announcement sometime before then, but the state government is working to make the "right decision at the right time."

There will not be a briefing on Friday in observance of Good Friday.