President Biden declared we're facing "a pandemic of the unvaccinated" and said “people are dying who don't have to die.” 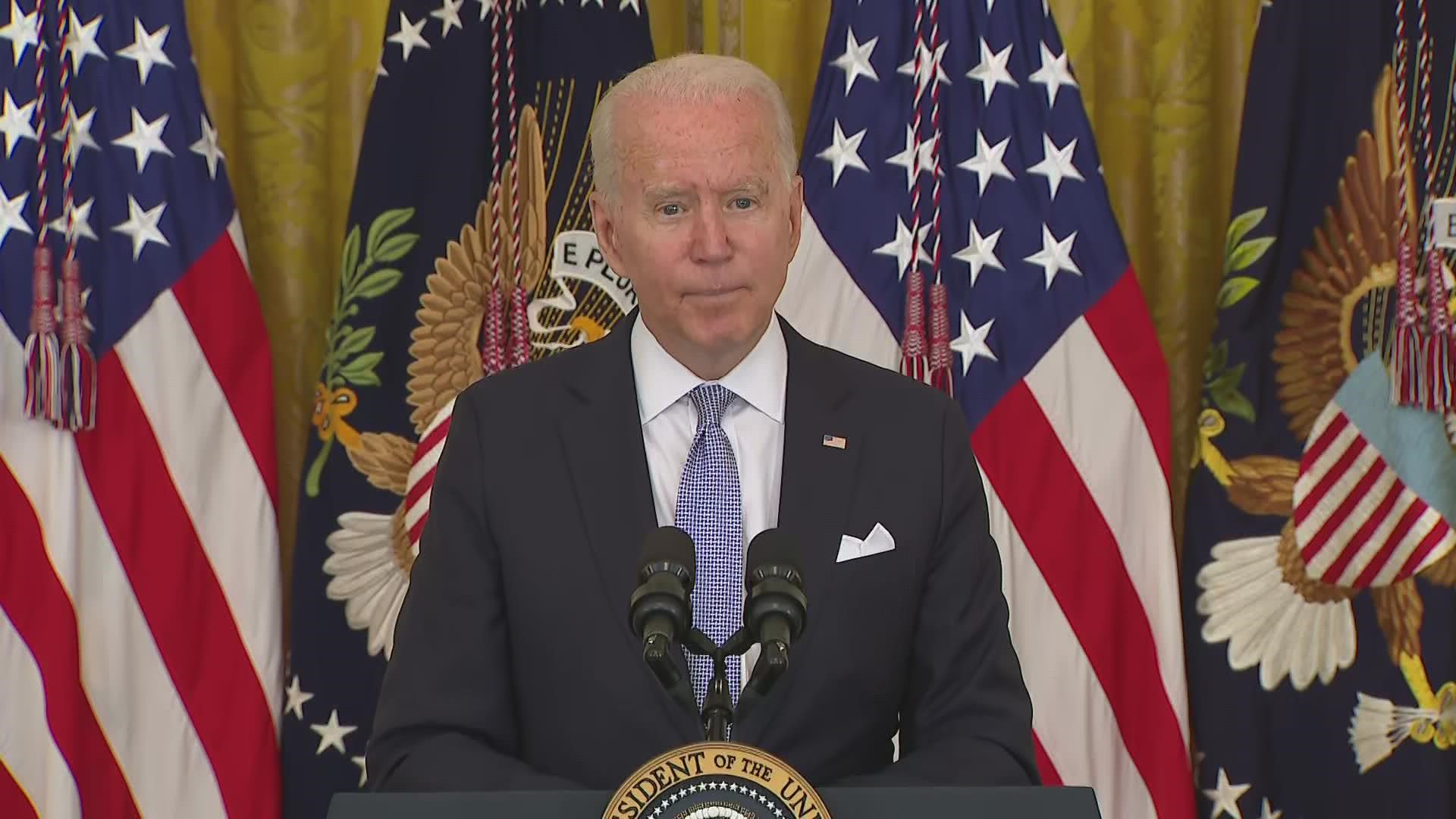 WASHINGTON — President Joe Biden on Thursday announced sweeping new pandemic requirements for millions of federal workers as he denounced an “American tragedy” of rising-yet-preventable deaths among unvaccinated U.S. employees and others.

Federal workers will be required to attest they’ve been vaccinated against the coronavirus or else face mandatory masking, weekly testing, distancing and other new rules. The newly strict guidelines are aimed at boosting sluggish vaccination rates among the four million of Americans who draw federal paychecks and to set an example for private employers around the country.

“Right now, too many people are dying or watching someone they love die and say if ‘I’d just got the vaccine,'” Biden said in a somber address from the East Room of the White House. "This is an American tragedy. People are dying who don’t have to die.”

The administration encouraged businesses to follow its lead on incentivizing vaccinations by imposing burdens on the unvaccinated. Rather than mandating that federal workers receive vaccines, the plan will make life more difficult for those who are unvaccinated to encourage them to comply.

Biden also directed the Defense Department to look into adding the COVID-19 shot to its list of required vaccinations for members of the military. And he has directed his team to take steps to apply similar requirements to all federal contractors.

In a statement released Thursday night, Deputy Pentagon Press Secretary Jamal Brown announced that U.S. Defense Secretary Lloyd Austin is exploring options as to how and when to do just that.

Biden also urged state and local governments to use funds provided by the coronavirus relief package to incentivize vaccinations by offering $100 to individuals who get the shots. And he announced that small- and medium-sized businesses will receive reimbursements if they offer employees time off to get family members vaccinated.

Over and over, the president repeated that the vast majority of those falling ill and dying in this new wave of the delta virus are unvaccinated, putting others at risk and endangering the nation's fragile economic recovery and return to normalcy.

“It's an American blessing that we have vaccines for each and every American. It’s such a shame to squander that blessing," said Biden.

Biden praised the recent increase in Republican lawmakers urging those not vaccinated — many of whom, polling suggests, identify as conservatives — to get their shots.

Children under 12 are not yet eligible to receive the vaccine, though Biden repeated his demand that schools fully open this fall. He also said that public health officials do not yet believe Americans need a booster vaccine despite the highly contagious delta variant fueling the surge.

Biden's move for the federal government — by far the nation's largest employer — and federal contractors comes in the face of surging coronavirus rates driven by pockets of vaccine resistance and the more infectious delta variant. A number of major corporations and some local governments are ordering new requirements on their own, but the administration feels much more is needed.

However, pushback is certain. The action puts Biden squarely in the center of a fierce political debate surrounding the government’s ability to compel Americans to follow public health guidelines.

The government directly employs about 4 million people, but Biden’s action could affect many more when federal contractors are factored in. New York University professor of public service Paul Light estimates there are nearly 7 million more employees who could potentially be affected, combining those who work for companies that contract with the government and those working under federal grants.

The pressure on workers could work because evidence shows people would rather get the vaccine than deal with burdens they consider onerous at work, said Lawrence Gostin, a professor of global health law at Georgetown University Law School.

“People would much rather roll up their sleeves and get a jab, than undergo weekly testing and universal masking,” he said. “In many ways, this is really not a mandate, it’s giving workers a choice.” 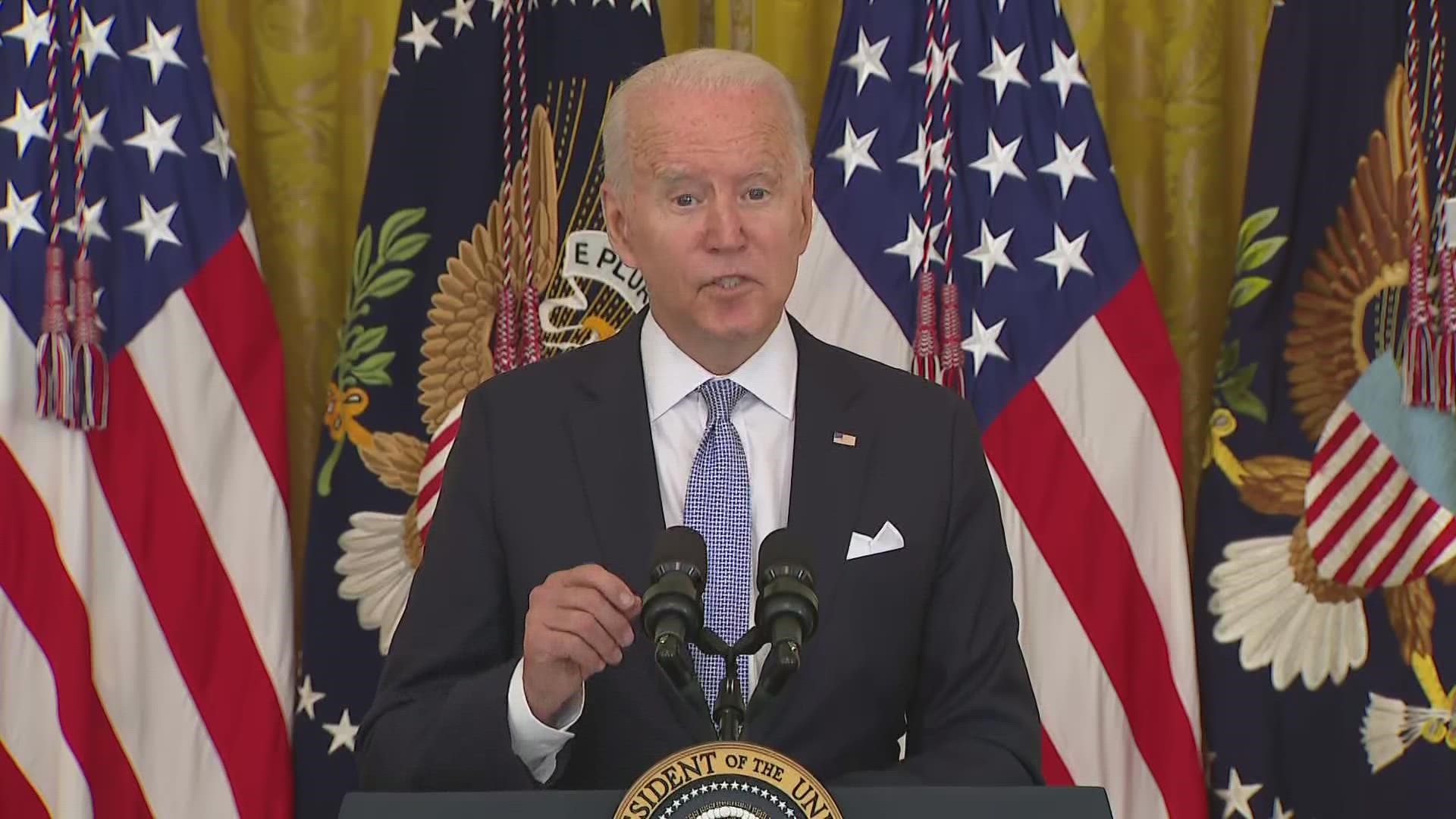 About 60% of American adults have been fully vaccinated. Biden had set a July 4 goal to get at least one shot in 70% of adults, and is still not quite there. The latest figure is 69.3.

According to the Office of Personnel Management, the executive branch employed more than 2.7 million civilians in 2020, with some of the most significant numbers in Republican-led Southern states including Texas and Florida, where substantial vaccine resistance remains.

But Thursday's move is not just about federal workers.

The administration hopes it will nudge private companies push their workers harder to get vaccines that, while widely recognized as safe and effective, have yet to receive full approval from the Food and Drug Administration.

“I think we’ve reached this tipping point, and Biden’s announcement will provide a lot of air cover for companies and boards of directors who have difficult decisions facing them," said Jeff Hyman, a Chicago-based business author and recruiter for start-up companies.

Some of the nation’s biggest corporations have moved to require vaccinations for their workers. Tech giants Facebook and Google announced this week their employees would have to show proof they’ve been fully vaccinated before returning to work.

Delta and United airlines are requiring new employees to show proof of vaccination. Goldman Sachs and Morgan Stanley are requiring workers to disclose their vaccination status though not requiring them to be vaccinated.

But fewer than 10% of employers have said they intend to require all employees to be vaccinated, based on periodic surveys by the research firm Gartner.

The Biden administration hopes its federal-worker guidance will help change that, by providing a model for state and local governments and private businesses to follow as workers prepare to return to offices this fall.

There is already opposition.

State lawmakers across the U.S. have introduced more than 100 bills aiming to prohibit employers from requiring vaccination as a condition of employment, according to the National Academy for State Health Policy. At least six states have approved such bills.

The Justice Department and the federal Equal Employment Opportunity Commission have both said no federal laws prevent businesses from requiring vaccinations as a condition of employment and the federal policy would take precedent. But the “medical freedom” bills underscore the resistance such guidance may encounter at the state level.

Government actions in New York City and California have already faced resistance from local unions. And prior to Biden’s announcement, some national unions were speaking out against it.

Brian Rothenberg, spokesman for the 397,000-member United Auto Workers, said the union encourages workers to get vaccinated but is against requirements because some people have religious or health concerns.

Larry Cosme, President of the Federal Law Enforcement Officers Association, which represents 30,000 federal officers and agents, said in a statement while the organization supports the vaccine it opposes compelling it.

“Forcing people to undertake a medical procedure is not the American way and is a clear civil rights violation no matter how proponents may seek to justify it,” he said. 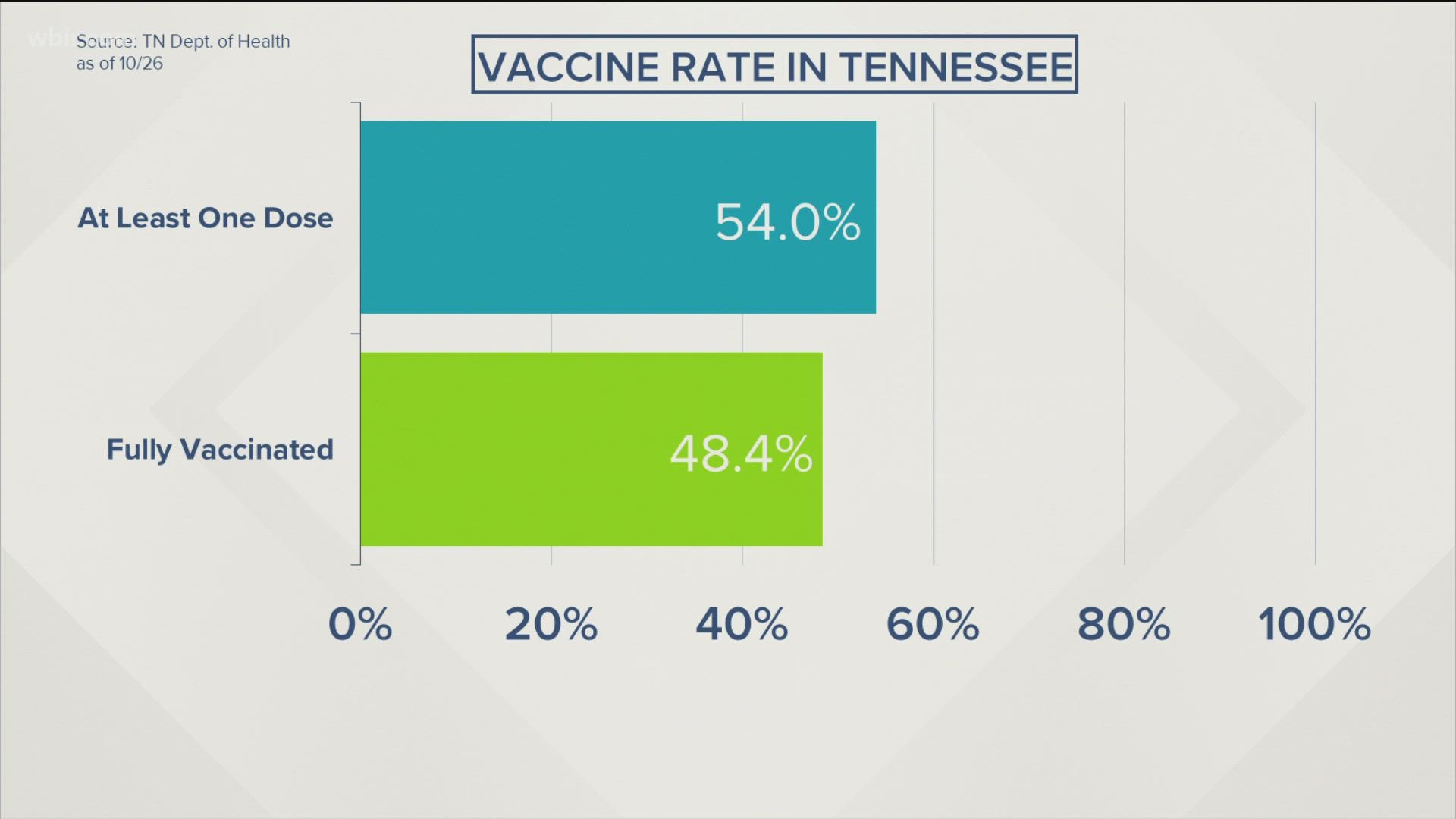