Beginning Monday, TDH and KCHD are offering vaccines to people 65 and older, as well as those in Phase 1b. Some providers are already scheduling those appointments. 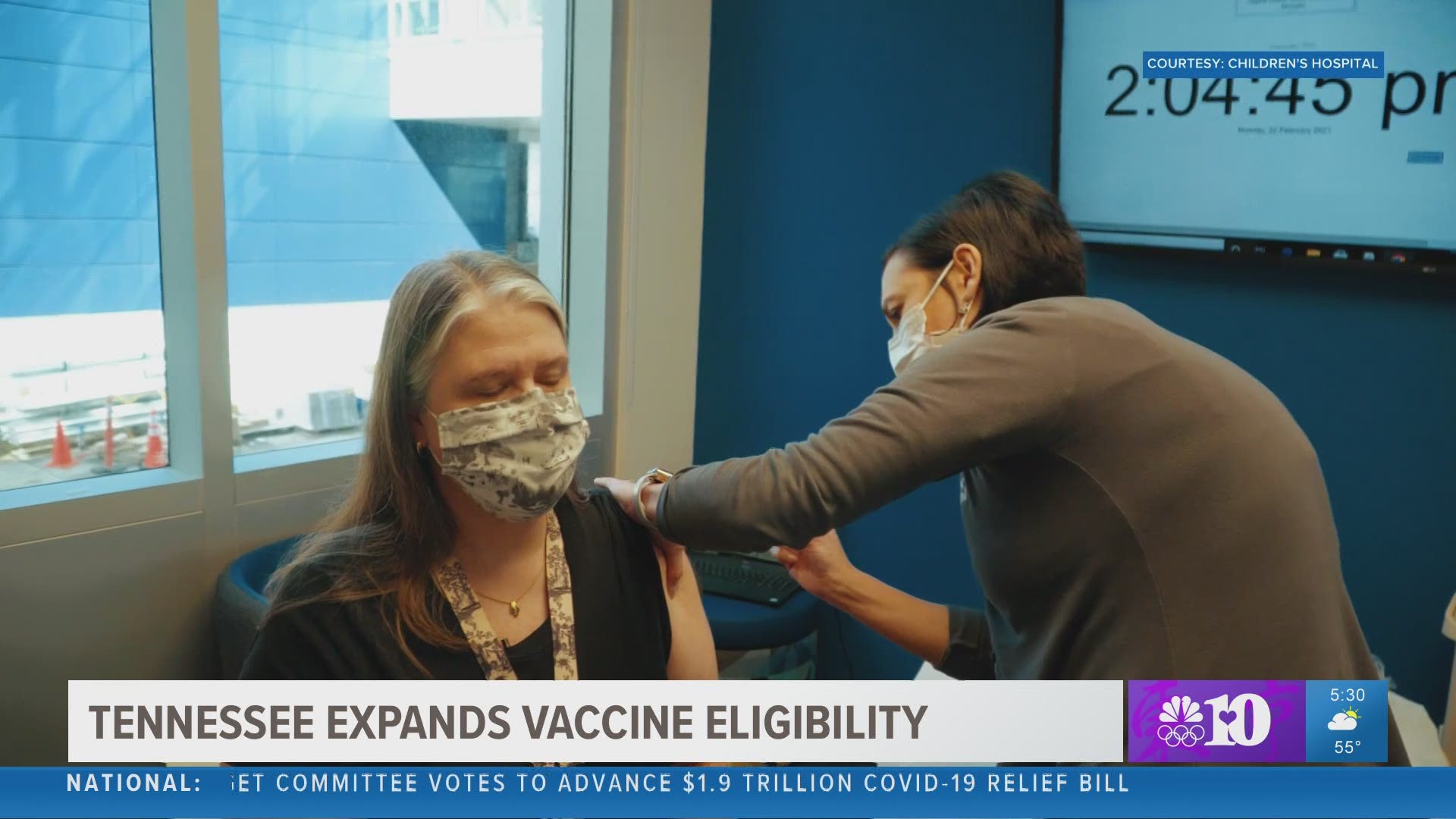 TENNESSEE, USA — On Monday, Tennessee is expanding vaccine eligibility to those in Phase 1b, as well as everyone 65 years of age or older. The changes apply to every East Tennessee county.

Phase 1b includes teachers, administrators and other staff members of kindergarten through 12th-grade schools and child care facilities, as well as operations personnel of first responder agencies.

"I felt like I was buying concert tickets because I was trying to type in all my information as fast as I could to be able to get an appointment," said Emily Harsell, who works with children in after-school programs across Knox County.
"Luckily, I got one. It's a day that I feel like I've looked forward to since last March."

While the eligibility is expanded, people who were eligible in earlier phases are still able to get the vaccine. Tennessee Health Commissioner Dr. Lisa Piercey said the state still recommends that providers prioritize the vaccine for the oldest and the sickest patients because they are most at risk from the virus.

“Tennessee has administered more than one million doses of COVID-19 vaccine so far, and we’ve made substantial progress in protecting our senior citizens who are over age 70 through vaccination,” said Piercey. “While we remain focused on our seniors, who are the highest-risk population, we’re able to expand vaccine eligibility to these additional groups as our supply continues to grow each week.”

The expanded eligibility will begin Monday for 89 of Tennessee's 95 counties under the state Department of Health. Knox County operates its health department independently but announced shortly after TDH it would follow in step with the state's vaccine rollout and expand appointments to people 65 and up and teachers in order to avoid confusion.

People in those groups wanting to sign up for KCHD's vaccine waitlist can do so at this link starting Monday. Currently, there are more than 9,000 people signed up on the waitlist.

For Knox County Schools employees, it said it has partnered with East Tennessee Children's Hospital to administer vaccine doses. Employees will be provided information through KCS on how to register.

For more information on the phases eligible for vaccination per county, registration, and more click here.

Tennessee has also launched its new online vaccine scheduling platform for the 89 counties it operates. Well over 2,000 appointments have been booked on the site so far. The new site lets people search for locations offering vaccines and book appointments directly if they are eligible, providing a list of dates and times available for booking. You can access the state's vaccine map here and the appointment site here.

Users will enter their demographic information and will then be able to choose a date and time for their vaccination appointment.

Tennesseans who have already registered for a COVID-19 vaccination do not need to re-enter their information in the new system.

Knox County has its own system for getting on the waiting list for a vaccine. TDH said it will later allow the metro counties to join the statewide system if they wish.

TDH has also updated the state’s vaccination plan by adding pregnant women in the later Phase 1c, which is estimated to begin in March. Although pregnant women were not included in the COVID-19 vaccine clinical trials, they are at increased risk for hospitalization and death due to COVID-19.

Pregnant women may choose to receive the COVID-19 vaccine as part of Phase 1c, along with others with high-risk health conditions.

Pregnant women are encouraged to talk with their health care providers to help them make informed decisions about COVID-19 vaccination. The Centers for Disease Control and Prevention has guidance for pregnant women to help reduce their risk of COVID-19.

This expanded eligibility comes as the state is expecting an increase in shipments of the vaccine.

Right now, the demand for vaccines far outweighs the supply. That is the biggest hindrance in getting more people vaccinated across the state.

Dr. Piercey said the White House has informed state leaders to expect a 10 percent increase in the weekly shipments. That would mean an additional 10 to 12-thousand doses a week.

In addition, makers of the Johnson and Johnson vaccine will seek approval in the coming weeks. If that's approved, Piercey said the state expects to start receiving those doses in early March. That vaccine is a single-dose, unlike the Moderna and Pfizer vaccine that requires two doses.

"That will significantly increase our supply," Piercey said.

The state has identified several locations across the state to hold mass vaccination events, once the supply of vaccines increases.

One of those locations is Dollywood in Pigeon Forge.