In Knox County, a third of the Board of Health's criteria for relaxing restrictions is met. However, health experts say it's too soon to stop wearing masks. 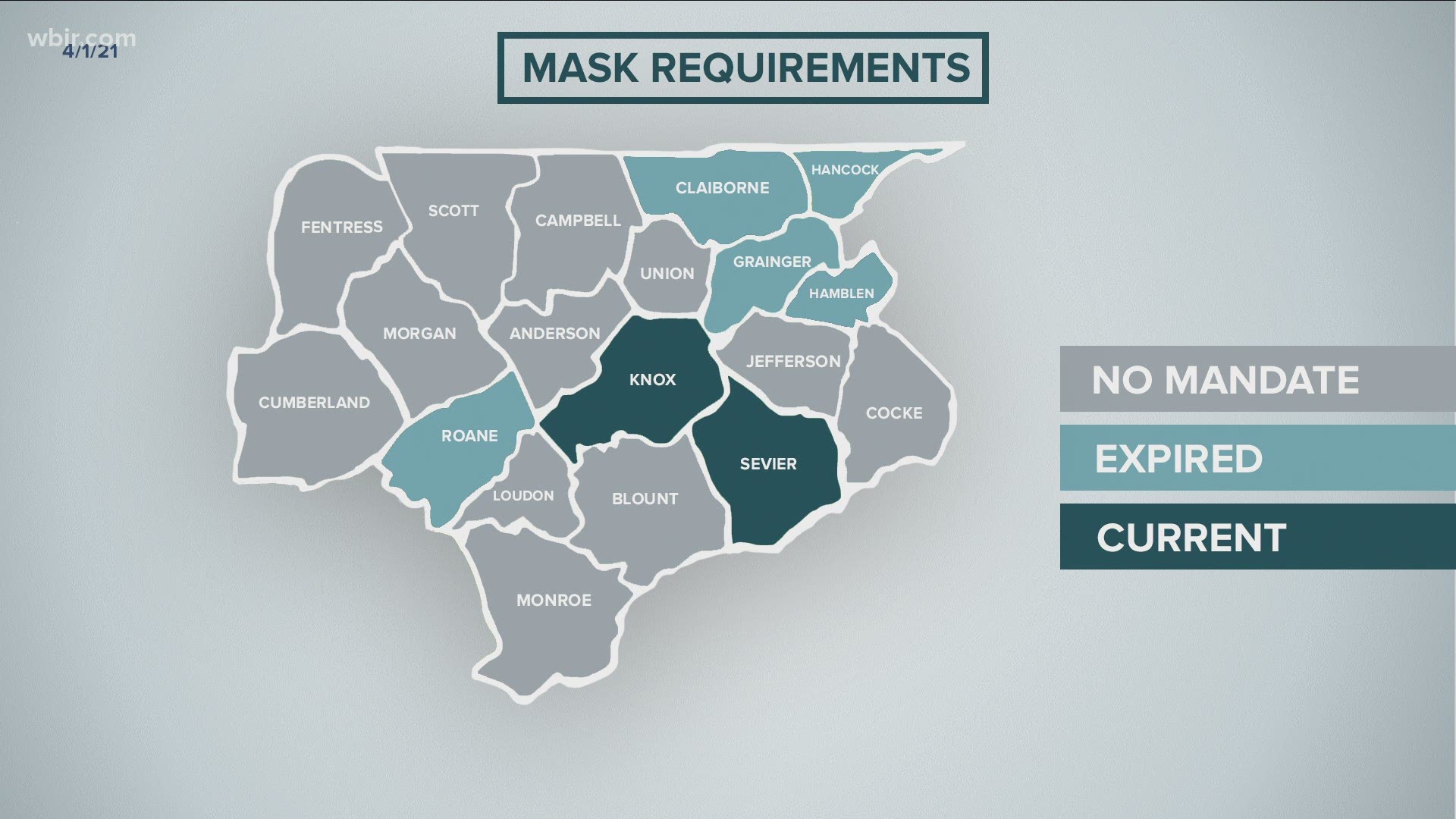 KNOX COUNTY, Tenn — Tennessee never had a statewide mask mandate. Instead, Gov. Bill Lee gave that authority to local county mayors. In East Tennessee, seven counties issued mask mandates as COVID-19 cases climbed. In the months since, some have let those orders lapse.

As of Thursday, April 15, all but one of those mask mandates will expire other than Knox County, despite warnings from health leaders.

"We are definitely making progress, but it's not yet mission accomplished," said Dr. William Schaffner, a professor of infectious disease at Vanderbilt University Medical Center. "It's still time to wear your masks, watch the social distancing and avoid large groups because we have this new highly contagious British variant of the virus here."

10News spoke with county leaders across the region to find out when mask mandates could be lifted. Here's what we found out.

On Nov. 10, the Knox County Board of Health passed a set of metrics for relaxing or tightening COVID-19 regulations, such as the mask requirement.

The first metric for lifting regulations is a positivity rate below 5 percent, averaged over 28 days. Right now, Knox County is averaging a positivity rate of 10.02%, per data from the Tennessee Department of Health.

The third metric is a green hospitalization benchmark for the region, meaning hospitals have resumed normal operations. This metric has been met since Wednesday, February 24.

The Knox County Commission voted to transfer the Board of Health's regulatory power to the Knox County Health Department on March 29.

On Monday, April 12, the Knox County Health Department (KCHD) released two regulations aimed at limiting the spread of COVID-19 and protecting the community.

These regulations continue the face covering requirement and the curfew restrictions for restaurants, bars, event venues and similar establishments set by the former Board of Health, according to KCHD.

Mayor Larry Waters extended the county-wide mask mandate until 11:59 p.m. on Thursday, April 15. A press release from county leaders said this was the final extension "unless there is a significant increase in cases and community prevalence."

County Executive Ron Woody extended the county-wide mask mandate until 11:59 p.m. on March 31. In a video release, Mayor Woody said they anticipate this will be the final extension.

"Our plans are not to extend past March," Mayor Woody said. "However, circumstances, of course, can change but we are not anticipating any change in the data that would cause us to have an extension."

Mayor Joe Brooks extended the county-wide mask mandate until 11:59 p.m. on March 31. He said told 10News he will not renew the mandate. "I feel I've made every effort to get those at-risk populations vaccinated," Mayor Brooks said. "With 1C opening up, I feel that [higher-risk] people are going to get vaccinated by the end of the month."

Mayor Bill Brittain extended the county-wide mask mandate until 11:59 p.m. on March 31. He told 10News he isn't sure whether that was the final extension, but that he'll likely make a decision by late next week.

On March 26, he announced that he would not renew the mask mandate because of declining active cases and the effectiveness of efforts to minimize exposure.

However, he encouraged everyone to continue wearing masks in large crowds and in businesses that require them, such as at healthcare facilities. He also urged people to get vaccinated as soon as possible.

Mayor Mike Byrd told 10News the county-wide mask mandate expired at the end of February. "[I] continue to encourage residents [to] wear a mask and social distance," he said. "Wearing a mask is a norm now for residents and a non-enforceable mask mandate at local level will not change [anyone's mind]."

10News has reached out to the Hancock County Mayor's office for more information.