High and rising: Patients concerned by cost of diabetes

The rising costs of drugs to treat diabetes is causing some patients to do without, or sacrifice other things to pay for their medication. 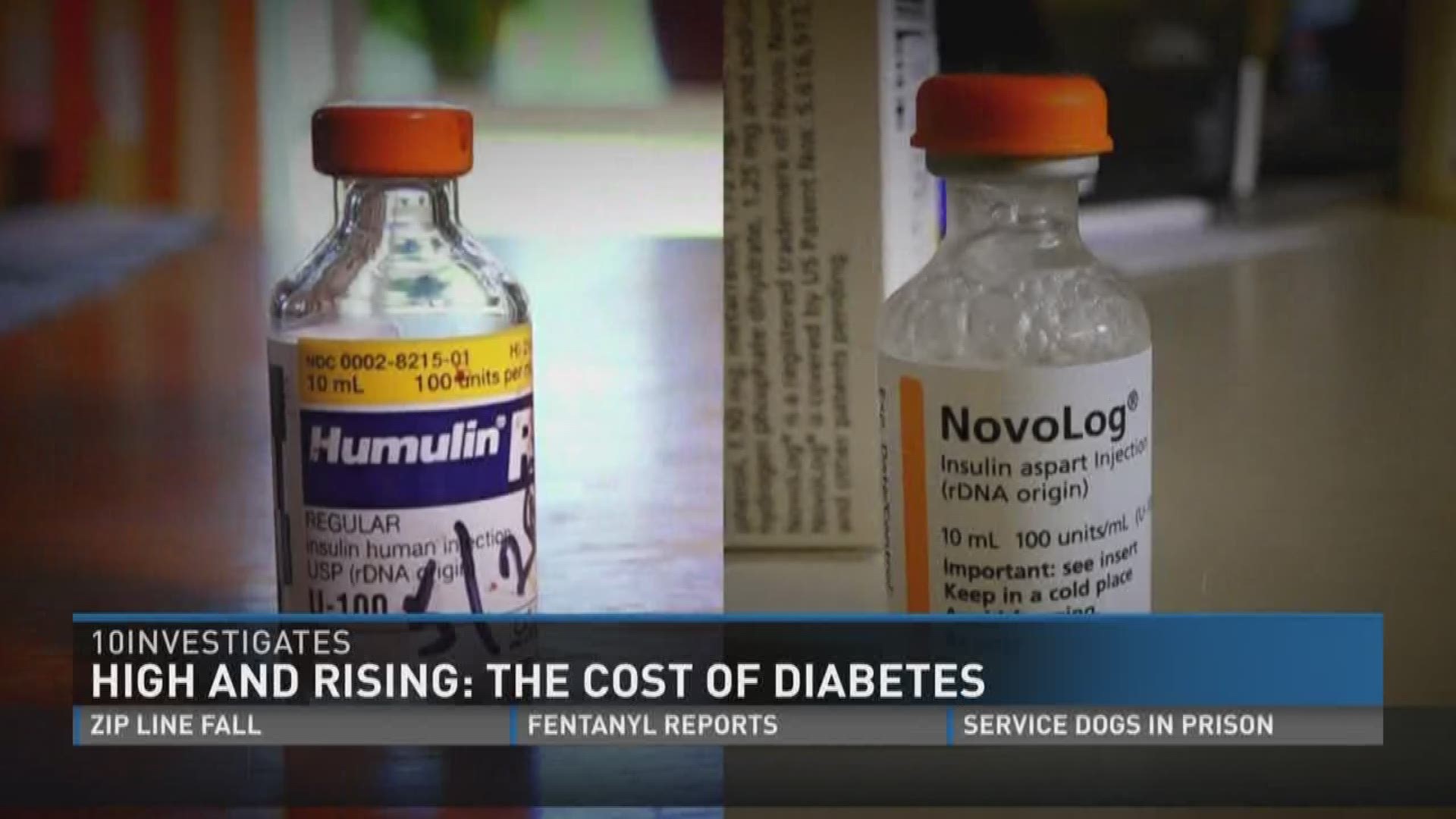 For the 29 million people battling diabetes across the U.S., the financial burden of treating the disease is already high – and rising.

After a 10News investigation in February dug into the varying costs of prescription medications, several people reached out asking us to look into the cost of diabetes. We did – and found several families struggling to make ends meet among the 600,000 diabetic Tennesseans.

Mindy Tayeh, of Knoxville, is one of those people. Every time she opens her fridge, she’s very careful with what’s kept in the door – the vials of insulin to treat her Type 1 diabetes.

“It sucks something so little is so expensive,” said Tayeh.

Tayeh developed diabetes as a teenager. Because of that, she’s struggled to get affordable insurance, and has been paying for her healthcare out of pocket.

“I haven’t had insurance in eight years,” she said.

She takes an insulin called NovoLog. Five vials set her back about $1000 every month. Then she needs to purchase blood sugar test strips, needles, and emergency injector, pump supplies -- between that and her lupus medication, she’s putting up $2000 a month.

“I mean everything I have goes to me, my diabetes,” said the mother of three. “It’s not fair to my kids.”

And that has left her with a question:

“I was just curious if there are other people out there having to pay like I do,” said Tayeh.

10News found that answer, to some extent, is yes.

Catherine Peterson, a Type 1 diabetic, struggles to pay for her medications.

Peterson is a Type 2 diabetic. She says the disease affects most of the women in her family as they age.

“It’s a time bomb I was sitting on and it exploded,” she said.

In the 'donut hole'

Peterson is retired, and covered by Medicare. She says some of her medical costs come from a Parkinson’s medication, but it’s the diabetic supplies that really add up.

She reached out to 10News in February asking a question much like Tayeh’s: why is the cost of her insulin climbing, and hard to predict?

Part of the reason is Medicare’s self-described ‘donut hole:’ a coverage gap in the middle of the year after a plan has paid out a set amount, and coverage drops off barring catastrophic spending. It’s in this gap that patients are more exposed to the list price of their medications – like Peterson’s Humulin R insulin.

“It just got to be outrageously expensive for them,” she said. “My bills for insulin have gone anywhere from $30 before I got into the donut hole to $250 a month when I was in the donut hole.”

The other reason: steadily climbing prices for insulin, even though many of them were developed dozens of years ago.

According to drug discount company GoodRX, which tracks ‘fair prices’ for many medications nationwide, the cost of Humulin has increased from about $85 to $145 since 2013. Novolog rose from $300 to $540 in about the same span.

Two popular insulins, Novolog and Humulin, have both increase in price since 2013.

“Insulin is one of the worst ones,” said Doug Hirsch, CEO and founder of GoodRX. “They’re all brand name drugs and they continue to rise.”

GoodRX recently launched a program in partnership with pharmacy benefits manager Express Scripts to make insulin more affordable. So far they’ve brought 10 insulins on board by working with manufacturers for discounts – Hirsch said many patients could see savings of 35%.

You can learn more about that program on GoodRX's website.

“I think manufacturers realize they’re needing to do something,” Hirsch said.

Humulin-maker Eli Lilly said the following in a statement:

“We work to limit the impact of price increases as much as possible, particularly for people who have high deductible insurance plans. New programs such as Inside Rx and the Blink Health platform -- both of which provide 40 percent discounts for most Lilly insulins -- are available to help people who pay full retail price at the pharmacy. We're also continuing to look for more permanent solutions to ease the financial burden for people who are uninsured and underinsured,” wrote a spokesperson for the company.

NovoLog manufacturer Novo Nordisk directed 10News to a pre-posted statement on its website.

The company also emphasizes three points of needed improvement from the industry: a transformation of the pricing system, better price predictability, and reducing the burden of out-of-pocket costs. It also maintains a patient assistance program.

The company added this statement:

“While many can access and afford their medication through insurance coverage, we know that a growing number of Americans with diabetes are paying more for their healthcare and this can include paying for medicines produced by us. Our single-digit price increase for NovoLog earlier this year was made independently based on a number of different factors and was in line with our commitment to limit price increases. Our data show that most patients using our medicines aren’t paying list price, but rather a co-pay based on their insurance. However, we know that some patients in high deductible health plans are being exposed to list prices."

Both Novo Nordisk and Eli Lilly are participating in the Express Scripts discount program.

There are other programs to help patients afford pricey medications. Peggy Ransom works for CAC’s Office on Aging in Knox County, managing the Affordable Medication Options for Seniors (AMOS) program.

She said she’s seeing at least one person everyday who can’t afford to buy insulin.

“What happens then?” we asked.

“They end up going to the doctor more often because of complications,” replied Ransom. “With diabetes, it can shorten a person’s life if they don’t get the right treatment.”

She adds – she can help navigate cost assistance programs for those of any age, not just seniors.

“There are a lot of different programs,” she said. “Because it’s specific to each medication and different requirements for each one, you have to read the fine print and see exactly what you need to do to apply for that.”

While Mindy Tayeh hopes to get on disability to help pay for her drugs, she also wants to raise awareness for those struggling to afford care.

Both Tayeh and Peterson hope for some sort of protection against rising prices.

Asked what she would do if drug costs continued to rise, Peterson balked.

“Well., I will just have to keep paying what I have to pay and cut back on something else,” she said after a pause.

“How much more can you cut?” asked 10News reporter Michael Crowe.

“Not more than a couple hundred dollars. I mean I’m already driving a 14-year-old car,” she said with a laugh.

For more information about the CAC Affordable Medication Options for Seniors program, click here. You can also call 865-524-2786.