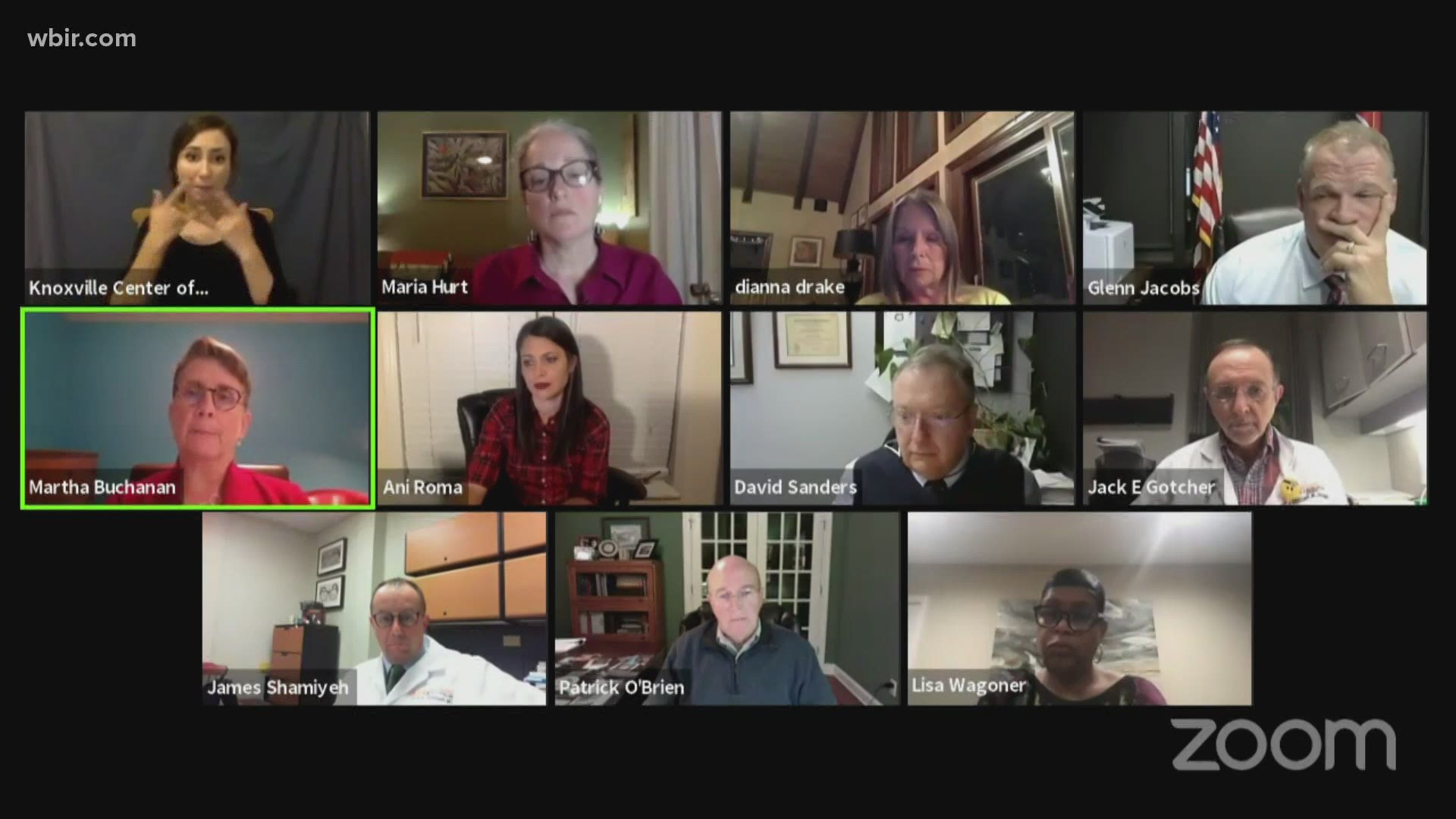 KNOXVILLE, Tenn. — The Knox County Board of Health met Wednesday evening to discuss the ongoing COVID-19 pandemic and to create a resolution asking Governor Bill Lee for an executive order requiring people to wear face coverings across Tennessee.

The board passed the resolution, 9-1, which requests Governor Lee to create a statewide mask and face-covering executive order. Mayor Glenn Jacobs voted against the resolution.

An earlier proposed resolution to expand health department authority to nearby regions was pulled off the agenda before the meeting, board members said.

Dr. Martha Buchanan also created a resolution with detailed guidelines for businesses to follow, to keep people safe during the COVID-19 pandemic, called "Safer at Home and Business Guidance."

The board passed the "Safer at Home and Business Guidance" resolution unanimously.

The board also voted to extend the 10 p.m. dine-in curfew and occupancy limit to Jan. 6. They also discussed a White House report that recommended limiting gatherings to 25% capacity of businesses and recommended closing bars.

The board voted to extend the curfew, 9-1. Mayor Jacobs voted against it.

The meeting started with a presentation from Buchanan about COVID-19 statistics in Knox County. She was recently diagnosed with COVID-19 and was working from home while in isolation.

She said that the county has averaged around 400 new cases per day and that the Knox County Health Department reported 11 deaths — the highest ever reported in a single day.

She said that the county hit a new record high number of COVID-19 cases, the total number of tests has increased and that the turnaround time for tests is around 6 days.

All Knox County COVID-19 benchmarks were set at "red," she said, and that they were above the limits where the board could consider escalating restrictions.

"Those bars are going to get a lot higher by the end of the month," he said.

He said that cases are increasing in every age demographic, but the most significant growth was in people over 51 years old. He also said that hospitalizations in December are on pace to exceed November's rates and that as colder weather approaches, people may spend more time indoors and COVID-19 may spread more.

"We're really just getting into the hospitalization spike after Thanksgiving," he said. "There's no reason to think that the situation will correct itself in the near term."

Charity Menefee from the health department said that in the last 16 days, there has been an average of 3.4 individuals dying due to COVID-19 and an average of 398 cases reported per day.

Patrick O'Brien said that an earlier resolution proposal to reinstate Executive Order 17 was put up as a draft in order to guide discussions to create more detailed resolutions to send to the governor. Specifically, he said that he thought asking for a statewide mask mandate would benefit Tennessee.

O'Brien said that around 65% of people wear masks in Tennessee and that fewer people were following social distancing guidelines than originally expected. He also said that there are more deaths in Tennessee than the population in Pickett County.

O'Brien suggested crafting a new resolution that details the COVID-19 statistics from Dec. 15 and asks for a statewide mask or face covering executive order, instead of asking to reinstate Executive Order 17.

"I feel strongly that we need to have a statewide mask mandate," said Marcy Jan Souza. "I've written the office previously saying we need to do something because we're going the wrong direction."

O'Brien said that requests from specific areas can have more weight compared to others and that a request from the board for a statewide mask mandate could lead to change.

Jack Gotcher said that the spread into rural areas may have changed the governor's opinions since March when the COVID-19 pandemic began because it has since become more of a statewide issue. O'Brien said that other republican governors have instituted statewide mask mandates, such as in North Dakota.

"I think now is our time to strike with this," O'Brien said. "We do need help from our citizens. It's been noted that we've had some churches and some other groups get together who are still trying to live their lives as they did before the pandemic. We really need them to take part in this."

Buchanan agreed that returning to Executive Order 17 would be too big of a leap, but also said that the COVID-19 pandemic was impacting the economy and Tennessee as a whole. She also said that PSA campaigns aren't making a difference in the spread of the coronavirus.

"He's the leader of our state, and if he says it, then it sends a different message," she said.

Dr. Shamiyeh said that the people who have the most potential to impact the outcome are people who decide to start wearing masks after refusing to wear them since it could inspire others to wear masks.

Maria Hurt also talked about a Knox County Commission proposal to limit the Knox County Board of Health. She asked why the board's powers are being changed and wanted to ask for the opinions of other board members on the commission's proposals.

"It pains me to be accused of power grabs, of trying to control people," Maria Hurt said. "I want us to imagine if you were given a job that you signed up for, then on a turn of a dime you were told you were going to have to make decisions that would affect the health and wellbeing of thousands of people, and that you wouldn't be able to meet and talk with your team members."

O'Brien said that he would not want the decisions to fall back onto the shoulders of the county's public health officer, and said that the existence of the board helps distribute that responsibility.

"I would like the county commission to just take a breath, we're all in this together working for the betterment of our county and our citizens," he said.

The board will meet again on Dec. 30.