The Knox County Board of Health met Tuesday, after Rep. Jason Zachary introduced a bill that would limit the board's power. 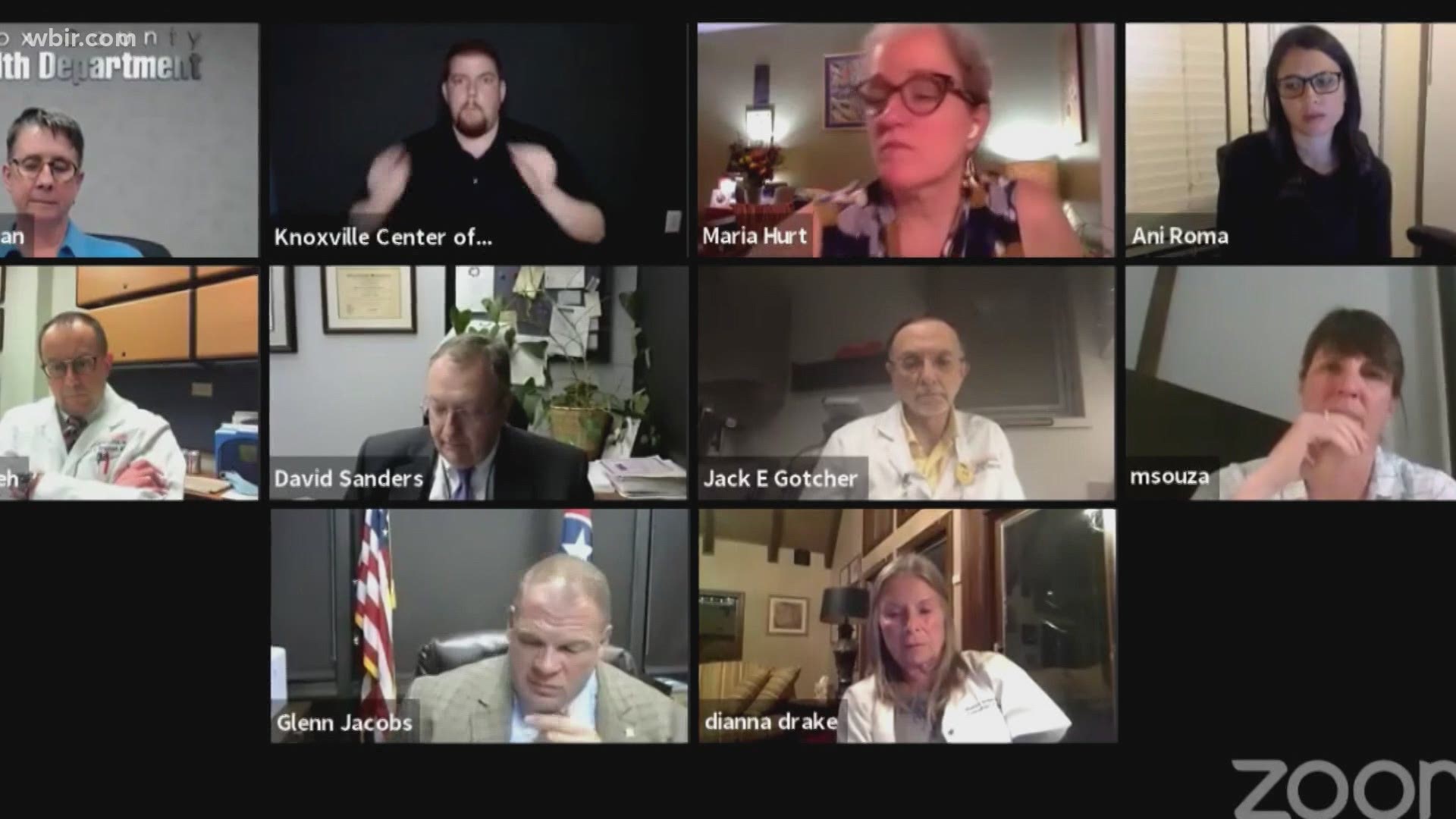 KNOXVILLE, Tenn. — The Knox County Board of Health met on Tuesday to discuss the 11 p.m. alcohol curfew in the county, the mask mandate and to finalize potential metrics to gauge when the board may tighten or loosen restrictions.

The meeting came after Representative Jason Zachary introduced HB0007 on Tuesday, which is co-sponsored by Representative Jeremy Faison. It specifies that the county mayor has the authority to establish and implement health policies that affect the entire county during a county-wide health emergency.

Health leaders also warned the community to follow safety guidelines to stop the spread of COVID-19 on Tuesday, with deaths and new cases on the rise. With the holidays ahead, they're urging families and friends to be safe.

"Our biggest problem is not gonna be restaurants or bars. It's gathering at homes with friends," said board member Dr. Patrick O'Brien. "What we really need to ask is to strongly work on the five core actions. We hear you but we also need a consistent application of these core actions, especially as we get to Thanksgiving."

Buchanan discusses new metrics the board could consider. She says hospitals would use a traffic light system, much like the current benchmarks.

For the metrics, if cases/positivity rate passed the escalation barrier then more restrictions could be put in place. #WBIR pic.twitter.com/L3ehoZmjiN

Board members finalized new metrics to guide decisions on when the board should escalate or loosen restrictions to slow the spread of COVID-19. They adopted the metrics in a unanimous vote.

They said they would loosen restrictions with less than 5% daily average positive rate and fewer than 5 new cases per day, averaged over the most recent 28 days.

Officials also proposed a traffic-light system, based on regional health data and HRTS data. The system stratified stages when benchmarks were at "yellow."

Dr. Martha Buchanan with the Knox County Health Department recommended using the metrics as a guideline instead of an absolute and said they would be used in conjunction with current benchmarks.

However, she also wondered if people would tolerate more restrictions.

"Are we going to consider escalation?" she said. "I can tell you what other communities have done. They've closed bars and restaurants, limited gathering sizes. There's not a lot of tolerance for what we have in place now. Is that going to get worse if we put more things in place? I don't know the answer."

Board extends 11 pm alcohol curfew until end of month. It passes 8-1. #WBIR

The board also discussed the face mask mandate and 11 p.m. alcohol curfew in Knox County. Officials said most of the complaints about establishments violating guidelines are near the UT campus. They also mentioned that the day before Thanksgiving is one of the biggest nights for the service industry.

They voted 8-1 to extend the alcohol curfew until Monday, Nov. 30. Knox County Mayor Glenn Jacobs voted against the extension.

The meeting also began Tuesday evening with public comments from members of the community. Three people signed up to speak. One person urged the board to intervene on the University of Tennessee's campus, saying that testing rates were low on campus.

Benchmark 1.) Sustained reduction or stability of cases for 14 days is red.

Benchmark 2.) Testing and turn around time is red.

Benchmark 3.) Contact tracing capability is green, but with increasing cases it's more difficult.#WBIR

Buchanan said that the Knox County Health Department placed three out of five benchmarks in "red" status and that the community saw the largest case count yet. The benchmarks were for the stability of cases, testing and turnaround time and the death rate.

It was the first time that the department measured three "red" benchmarks, Dr. Jack Gotcher said.

Dr. James Shamiyeh also said that Knox County also reported a positivity rate above 10% for more than 27 days. He also said that while the number of patients in hospitals spiked then fell over the summer, they spiked again over the last 20 days and have stayed high.

Officials said they anticipate at least two more spikes due to the holiday season.

Dr. Spencer Gregg said that the University of Tennessee identified a new cluster related to a student gathering on Oct. 31. He said that officials identified five positive cases of COVID-19 related to the gathering, as well as four close contacts.

The board also discusses new guidelines to decrease the length of future meetings.

Dr. Gregg leads the UT presentation. He says testing has gone up in the student health center.

The university had its first cluster of 5 positive cases and 4 close contacts for the first time about a month that was from a small gathering on Halloween. #WBIR