No votes were taken at the emergency meeting on Friday. It comes after the Knoxville City Council voted to penalize businesses violating COVID-19 restrictions. 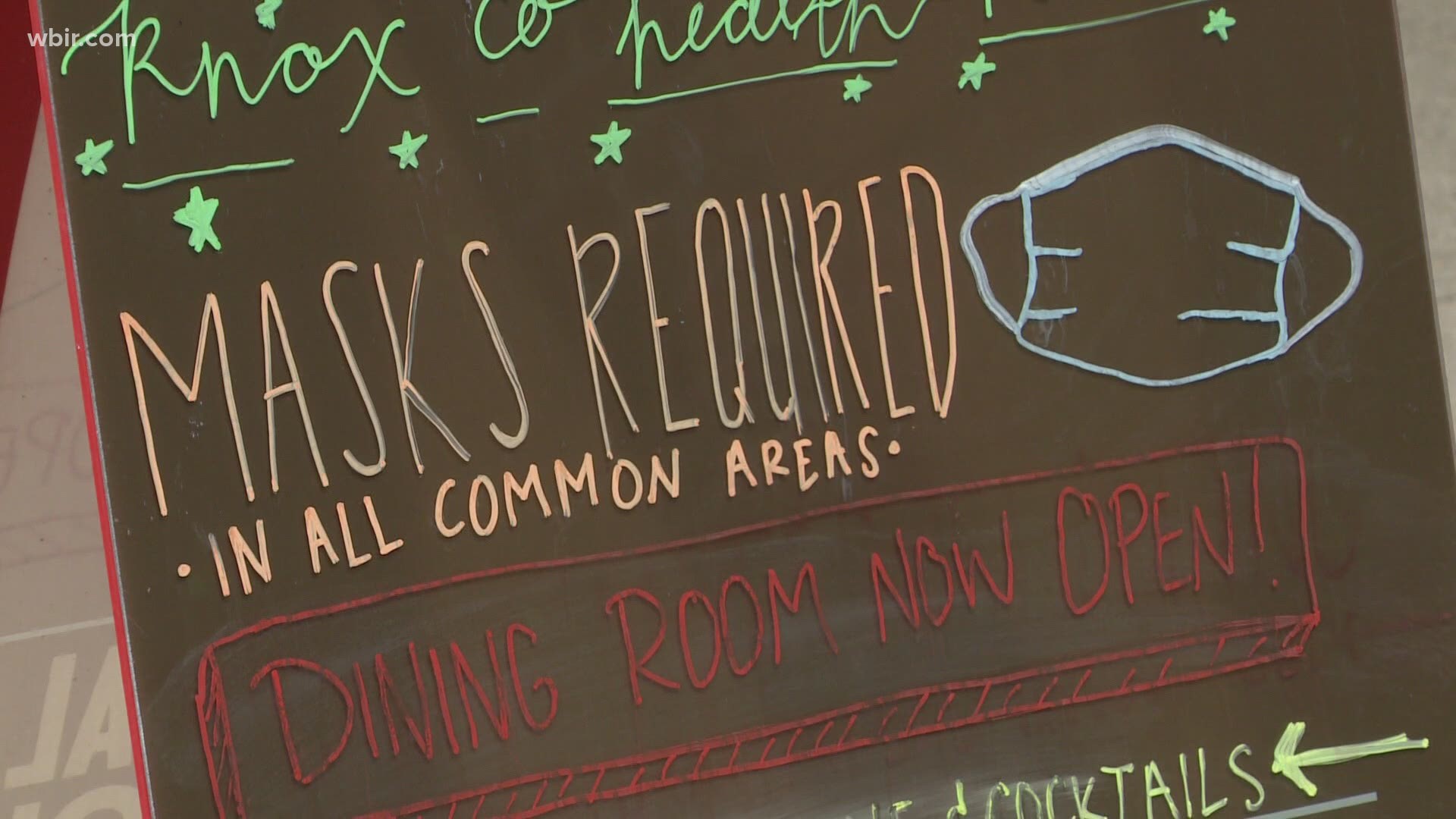 KNOX COUNTY, Tenn. — The Knox County Board of Health met Friday evening to discuss further restrictions to stop the spread of COVID-19 after officials reported a total of 2,018 active cases of the coronavirus in the county.

It was a special, emergency meeting where Knox County Health Department Director, Dr. Martha Buchanan, presented information about successful mitigation efforts in other states. She started the meeting with an overview of the metrics in Knox County, along with Dr. James Shamiyeh. She said it was the worst numbers the department had seen yet.

Shamiyeh said that the pace of new COVID-19 cases has continued to rise, especially during the weekend of Nov. 15. Most new cases were from people who are at least 51 years old, he said. More cases were also reported from people between 21-30 years old.

He also said that the positivity rate of COVID-19 tests had been well over 10% for several days and that there have been intermittent issues with a shortage of convalescent plasma. It is used to treat people with COVID-19, and he encouraged people who had the coronavirus to donate plasma to boost supplies.

"We're much more likely now than ever before to be around someone who has COVID-19 who might not be symptomatic," Shamiyeh said.

Officials also said that cases are continuing to rise in states across the U.S. Buchanan said that there are fewer states that are totally open as the number of cases increase.

Hurt is who called for the meeting. She says waiting until their next meeting the day before Thanksgiving would be too late to discuss options for the county. #WBIR

Dr. Maria Hurt said that waiting until the week after Thanksgiving would be too late to keep the community safe. Many schools in the county have already said they would stay closed to in-person learning into December.

"What's going on in our community has impacted our schools quite significantly," Lisa Wagoner said.

Buchanan said that her staff scoured the "Morbidity and Mortality Weekly Report" from the CDC for information on coronavirus restrictions. She cited data from Arizona that showed the rise of COVID-19 cases slowed and stopped after stricter restrictions we put in place.

Glenn Jacobs said that cases of mental illness have risen due to COVID-19 guidelines and fewer reports of child abuse have been seen, possibly due to children having fewer opportunities to reach out for help. Suicides and deaths from overdoses have also risen, officials said.

However, Hurt mentioned a study from the NIH that found wearing a mask can reduce anxiety and help alleviate mental health issues.

"The point at which an action is symbolic is past us now," Dr. Shamiyeh said. "We need to be thoughtful of whether it is going to have the desired impact right now."

Buchanan says the pure public health approach is to lock things down but knows that's difficult to because of mental health and the economy. She says that's probably not the answer but asks what they can do instead to slow the spread. #WBIR

"Our decisions are not driving mental health issues. The pandemic is," Hurt said. "People are actually begging us to implement stricter mitigation efforts."

She also said people are contacting the board for more enforcement of policies, and that rising COVID-19 cases are worsening consumer confidence and causing the economy to recover slower.

She recommended limiting restaurant capacity to 25%, setting the alcohol curfew back to 9 p.m. or another time and limiting gathering sizes.

Patrick O'Brien said that the board should consider another emergency meeting to hold a vote on new measures before their next scheduled meeting on Wednesday. He said that it could be too late to wait until Wednesday to meet since the day before Thanksgiving is one of the largest nights for drinking out.

"Come on folks, things are getting worse," O'Brien said. "For the good of yourself and everybody else, hunker down. Please, really be careful. This virus is killing people."

He said that the board may need to pass stricter regulations in the next few days.

Buchanan said she could work with the board's legal counsel on regulations so they would be ready from the next meeting which they could then vote on. The board discussed calling another emergency meeting early next week.

Buchanan mentions limiting social gatherings is a place to start. She says the know it's impactful. She also mentions based on data something regarding restaurants would be helpful as well. #WBIR

Marcy Jan Souza said that capacity restrictions for businesses may be worth considering.  Charity Menefee said that small social gatherings between friends and coworkers at homes, offices and restaurants are the most significant causes for COVID-19 cases.

Menefee also said that it is getting harder for officials to pinpoint where people are being exposed to COVID-19 since so many are being reported.

Officials also talked about regulations in surrounding counties, which may be more lenient compared to Knox County. They said it could be hard to mitigate the impact from nearby counties with looser regulations.

Dr. Patrick O'Brien presented a study that said restricting the number of people in a place at once has had significant results to prevent the spread of COVID-19. The study was named "mobility network models of COVID-19 explain inequities and inform reopening."

It said that restaurants, fitness centers, cafes, hotels, limited-service restaurants and religious organizations are the most effective locations to close in order to reduce the number of COVID-19 cases.

O'Brien said that in May, 639 businesses were identified in Knox County where at least 100 people would visit for more than 15 minutes. He said the information could help the board make decisions in the future.

"I just wanted people to know that we have this and that this information is available for us," he said.

Hurt proposes limiting restaurant capacity to 25%, setting alcohol curfew to 9 p.m. and limiting to gathering sizes to 8 or 10 people.

Buchanan will work with the board's legal counsel to write those proposed regulations.
#WBIR

"The state has come up with a tiered program, and tiers within the tiers," Buchanan said.

She also said that the coronavirus vaccine would not be mandatory. Buchanan said that most vaccines come in two-doses; the first vaccine has to be stored in ultra-cold temperatures and she said it can pose a logistical challenge when distributing it.

The meeting was also held after Knoxville City Council voted to approve new measures to support COVID-19 curfews. Under the new measures, businesses could lose their beer permits if they serve alcohol after 11 p.m.

The Board of Health scheduled another meeting at 5 p.m. Monday night to vote on new regulations to slow the spread of COVID-19, before their regularly scheduled meeting on Wednesday.