Patients of a Knoxville dentist warned to get tested for HIV, hepatitis B and C

Buzz Nabers had his dental license put on probation for two years after the Dept. of Health found he improperly sterilized tools. 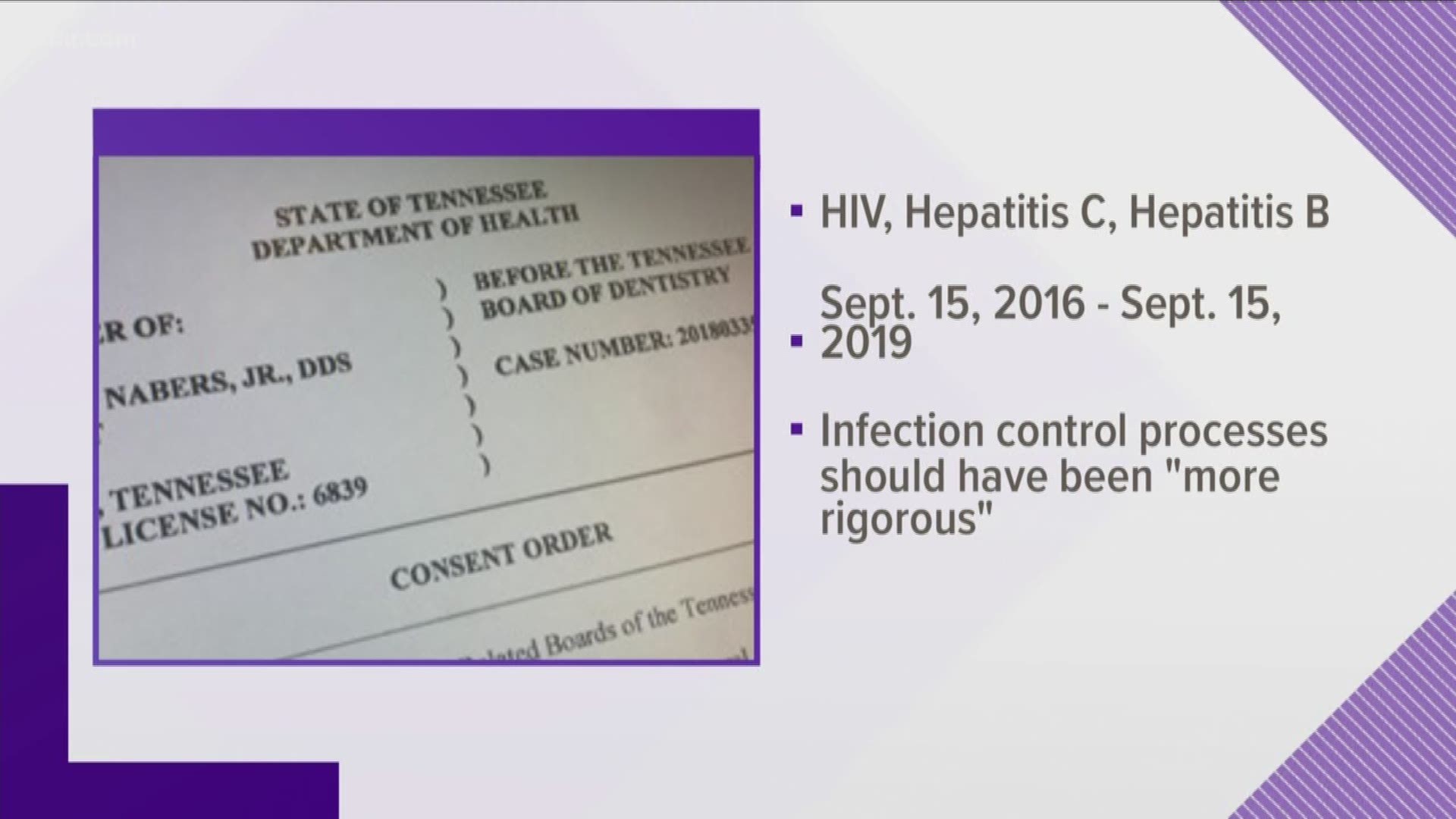 A Knoxville dentist who had been found with improperly sterilized dental tools back in August is recommending patients who went to his office between 2016 and 2019 to get tested for HIV, Hepatitis B and C.

The Tennessee Department of Health provided a copy of recommendations they sent to Clarence 'Buzz' Nabers in September 2019, which said there was a "very small chance" people could have been exposed to bloodborne pathogens because of improperly sterilized dental tools.

The recommendation provided a sample of a letter Nabers sent to patients, which recommended people who went to his dental offices on South Gay Street or Thunderhead Road between Sept. 15, 2016 and Sept. 15, 2019 to get tested for HIV, hepatitis C or B through a lab, primary care provider or the Knox County Health Department.

"All of us at Buzz Nabers Restorative/Cosmetic Dentistry understand that this may be alarming. We want to assure you that we will assist you in every way possible," the letter read.

Clarence Nabers owns and operates two dental offices in Knoxville, but the state said it found he was the only dentist at both locations for a few months in 2018.

Both of his practices did not use the proper sterilization procedures for multiple tools, according to the state. They also reused disposable burs. Burs are often used to grind away tooth tissue, usually enamel.

Nabers allowed dental hygienists to practice outside of their qualifications, according to a disciplinary order from the state department. The state said he let them provide comprehensive examinations, diagnoses and treatment planning without consulting him.

They also administered fillings and placed permanent crowns, veneers and dental bridges, according to the disciplinary order.

According to the state's findings, both practices placed burs that had been used in dental procedures in cold sterile solution.

Autoclaves, which sterilize the tools after they're cleaned, were not spore tested to ensure they were able to kill dangerous microorganisms on dental tools, the health department said.

The report said Nabers has implemented new protocols for documenting the cold sterile solution and the cleaning and maintaining of dental burs at both offices. It also said he got an outside biological monitoring service to provide periodical spore testing as of December 2018.

The handpiece and air water syringe used on patients in dental procedures were not properly sanitized between patients and was only wiped with a sanitizing cloth, the state found.

"Dental chairs not cleaned with a sanitizing agent," the department of health consent order said.

It said Nabers has since implemented new protocols for the dental bur sterilization, operatory disinfection, and handpiece maintenance.