I went all influencer on this Instagram mural tour, gained absolutely zero followers, and loved every second of it 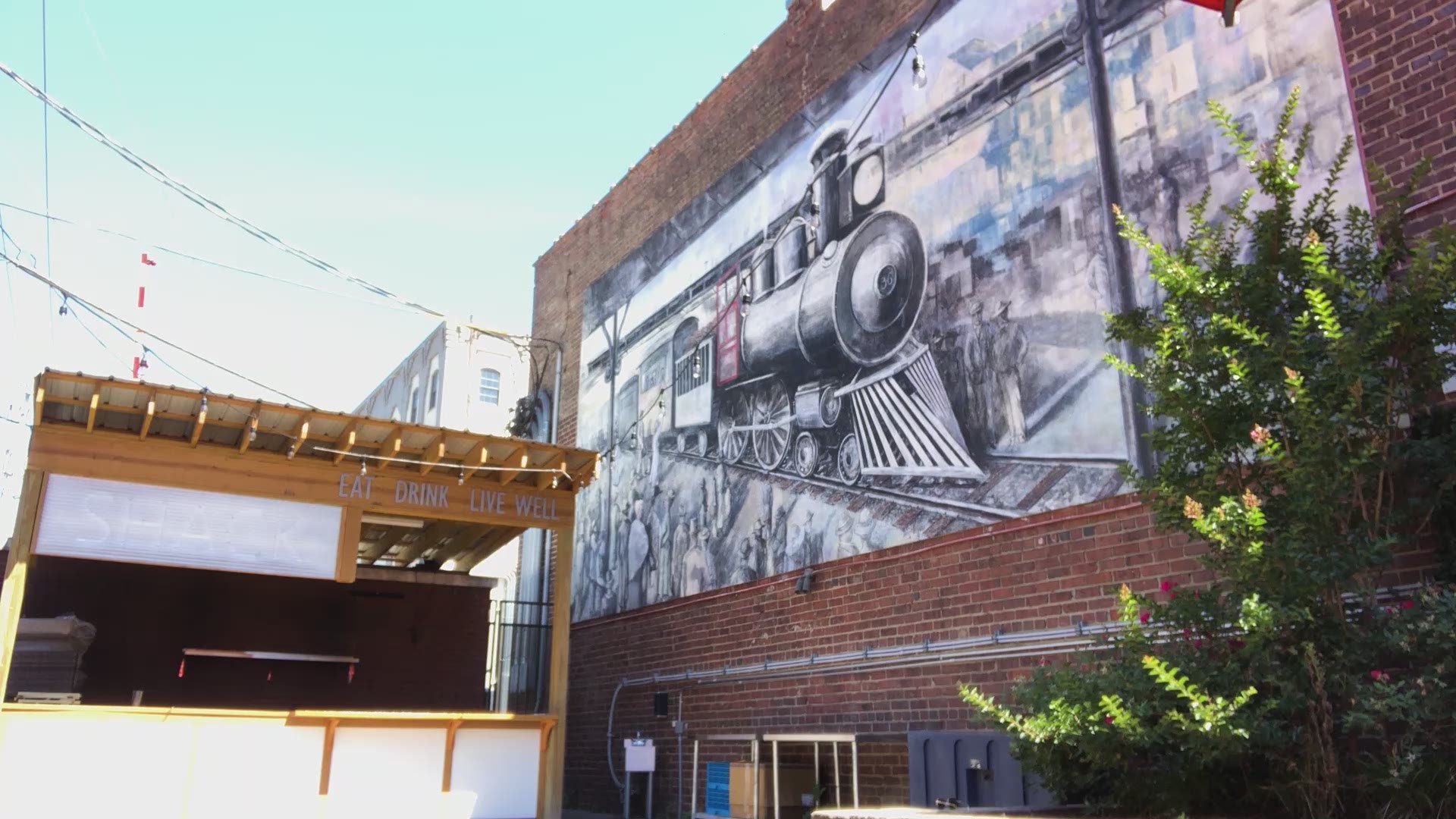 Despite that outrageous hat, I am not an influencer.

Cursed with hodgepodge fashion sense and what I'll call an asymmetrical lilting right shoulder, I’m one thousand and ninety seven apathetic followers deep on the gram and falling fast. I lost five of them just last week. Fate, barring some luxurious South Asian vacation or Tobi splurge, wills me to brunch on out-of-pocket chocolate chip waffles the rest of my unsponsored days.

#Adlife woes aside, I had myself a time on the new Knoxville Joyride Instagram Mural Tour.

“We were worried in calling it an ‘Instagram Tour’ that would dissuade maybe older people or make people think you had to be an influencer to go on it,” said manager and tour director Lauren Quinn.  "Really it's just a way to see some of the prettiest spots in Knoxville."

Indeed, the tour takes you by golf cart to some of the most aesthetically pleasing parts of the city. While many of the murals have been commissioned, others are a chaotic agglomeration of color and abstracts set against brick that local artists have transformed into canvas. As Knoxville continues to catch up to the art scenes in Chattanooga or Asheville, the murals that grace our city's walls are fast turning into free, must-see attractions that Joyride has embraced.

So. Armed with a DSLR camera and trendy black hat similar to one Jonathan Russell from The Head & The Heart once wore, I hopped in the golf cart for a new adventure.

And, of course, to see if I could snag any new followers out of this thing.

We carted off first to the Old City, where a bold mural of bees and butterflies is smattered across the side of Dreambikes Bike Shop.  Crafted by Knoxville artist Curtis Glover earlier this year (more on him later) our first stop on the tour is both a bold reminder of nature’s beauty and a not-so-subtle call to protect it.  While it's larger than life, the details here are insane so make sure to get a pic from multiple angles.

Just a hop away from the bee mural, the Lonesome Dove Train mural is rich with Knoxville history. It’s one of the oldest murals on the tour and pays tribute to the train's influence in helping Knoxville morph from teensy river town to thriving commerce hub.

It’s also been around since the Old City’s shabbier days, so it's become a nice reminder of Knoxville's roots.

Look closely, and you'll see the likes of Dolly Parton and other talented Tennesseans grace the side of Kefi. Aside from being visually stunning, this mural also has quite a history.  After its unveiling in 2000, the whole thing slowly became covered with graffiti over the years.

So, the city just covered the whole wall up, mural included.  But the people of Knoxville weren't having that, and so the city had the original artist Walt Fieldsa paint over it another time.

It's been brightening up the walls of the Old City ever since.

Cozied up between Old City Java and DaVinci’s Pizzeria, none of the murals in this alleyway were actually commissioned. Instead, this alley is an ongoing homage to the rebellion and imagination of an artistic mind. There’s a mermaid and dragon mural, too many blossoming flowers to count, drawings of priests, and an entire story someone painstakingly scribbled along the side but never finished.

These murals demonstrate art that skirts the line between graffiti and street art. In cities like Miami and New Orleans, the talents of graffiti artists turned muralists have helped to revitalize entire areas. Curtis Glover, the man behind many of the murals you see on the tour, said it's cool to now see talented graffiti artists making the transition to street art.

"Graffiti is more illegal, rebellious. It's more hush-hush," Glover said. "Some of those guys are really good at what they do. Some people do it for the rush some people do it to pay bills."

Beckoning partygoers to shots of Irish whiskey inside Jig & Reel, the mural of burlesque dancer Molly Knox was also created by Glover. He said social media plays a massive role in why businesses are now paying people like him to adorn their walls with street art.

"Everyone's gotta get their selfie in front of the cool wall," Glover said. "People like to be seen in front of artwork doing whatever their thing is. It does lend a hand in an industry for street art."

Though Glover is one of our area's most successful street artists, he didn't start out that way. When he first quit his job and decided to work for himself, nobody knew what he was up to.

"The demand, the awareness of it wasn't quite there," he said. "Just got to a breaking point where I had an ability to be creative more so than working for somebody else."

This next mural isn't just a fun staircase: it's also a secret scavenger hunt. Artist Erik Vass wanted a vibrant statement piece to greet people entering the Old City. And there are almost 50 different references embedded into the mural.

You can pick up a list of clues at the Knoxville Visitor's Center or Jig & Reel.

As we wind down Gay Street to the commissioned “Postcards from Knoxville” mural that rests alongside Visit Knoxville, I realized this tour draws a lot of stares. People in cars stare, babies stare then cry, and pedestrians actively gawk.

Those stares, though, can turn into new riders.

"We see people being interested," Quinn said. "You sort of see someone else doing it and you want to take a ride as well!"

The "Postcards from Knoxville" mural is the largest one in the city and, aside from being good for your gram, has another trendy tie: it got its name from an online contest back in 2013.

I think we can collectively agree that any city across America deserves a supersized mural of Dolly Parton’s head on it. Completed last year, the Dolly mural is the newest addition to the ever-rotating images on Strong Alley.

When we zoom by on this next stop of the tour, we meet two women who have integrated Strong Alley into their regular Market Square routine.

Neither of the women considers themselves influencers but, like an increasing number of Knoxvillians, Weatherly Renshaw said Strong Alley is now a staple in their Market Square adventures.

"We came to eat then we wanted to see the Dolly mural that is here because we love Dolly," said Renshaw. "We kind of follow all the influencers especially our local Knoxville girls."

Next up is a mural that's tucked out of the way by Women's Basketball Hall of Fame and, though it's as pretty as the rest of them, it's rather elusive.

Joyride Knoxville couldn’t find any information on this mural.

I, too, couldn’t find any information on it. Short of going full Serial Season 1 on this mystery, we only know that it’s called “Mountains”.

This mural is also tucked back and winds alongside the long road next to Ruth's Chris. The 11 different panels are an ode to the variety of species found in the Tennessee River and was commissioned by the City of Knoxville Public Arts Committee. Artist Eduardo Mendieta completed it in April 17.

A perennial must-snap for recent UT grads, the weaving rainbow staircase is a welcome pop of color on Cumberland Avenue. It’s also the final stop on Joyride’s Instagram mural tour. It was funded by the city for $16,500 and completed by artists Jessie Unterhalter and Katey Truhn in 2017. At the time, Mayor Rogero called the mural a "vibrant tribute to the craft revival movement that took hold in Knoxville and most of Appalachia from the 1890s-1945." 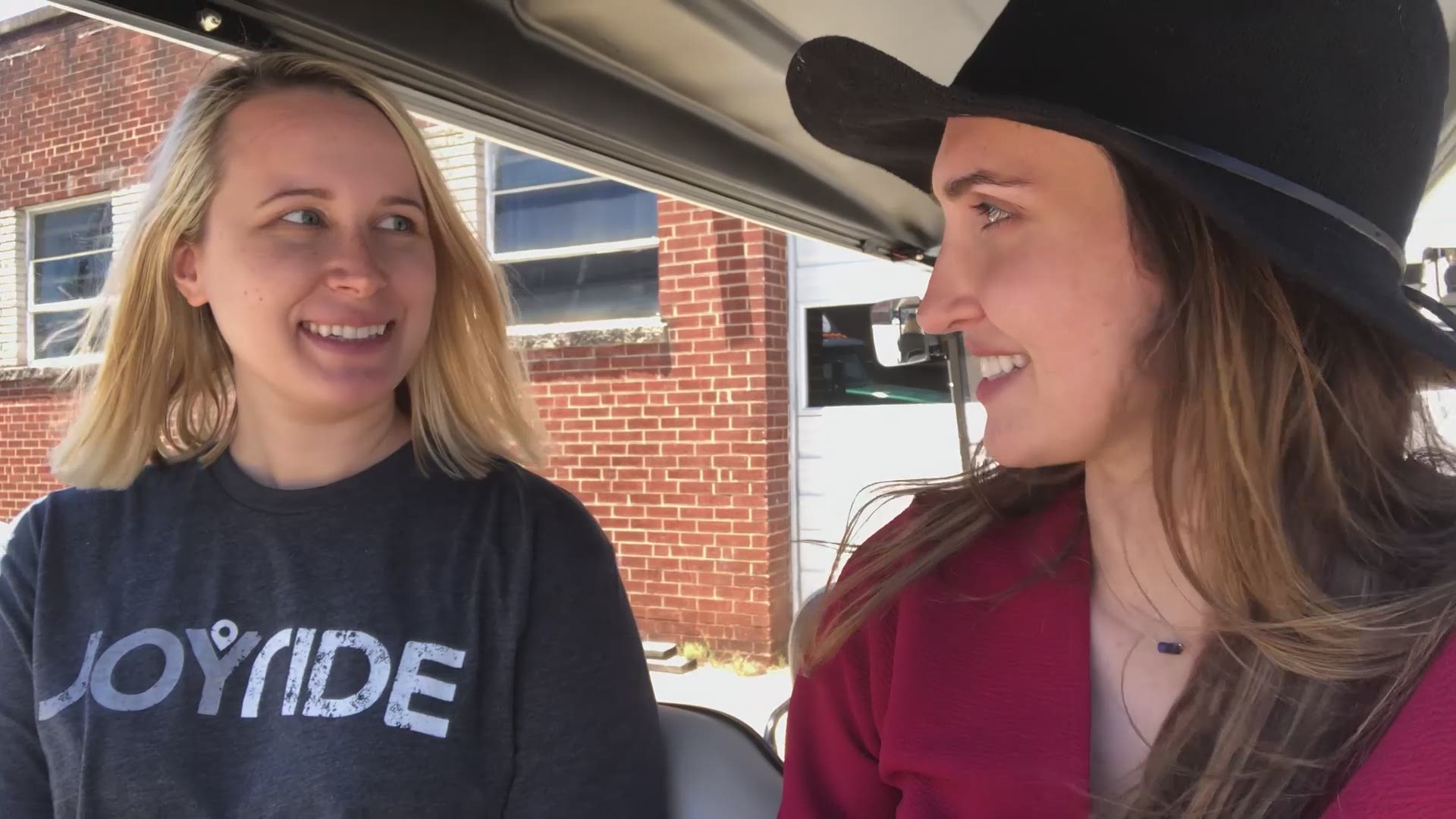 The Instagram post I sent out just after taking this tour only got me 100 likes on my profile. Per Instagram's website, the average number of likes a person can expect to get is a tenth of whatever their following is so, statistically, this post should have gotten about 119 likes. I also gained absolutely zero followers from the experience.

No, The Knoxville Joyride Instagram Mural Tour didn't magically make me an influencer overnight. But it did give me a closer look at the stories of artists behind murals I speed by every day. More importantly though, it gave me some insight into the lives of the people featured on the murals whose stories are so widely seen across Instagram, but hardly heard in real life.

So yeah, lack of internet prestige aside, I'd totally go again.

Want to go on your own tour? Here's where you can see the murals for yourself!

Reporter's note: Two of the murals on the tour are not featured here. Those locations were too far out of the way for our tight ~deadline~!!

RELATED: Your guide to downtown Knoxville

RELATED: Scratching the surface: A growing mural scene brings color all across Knoxville