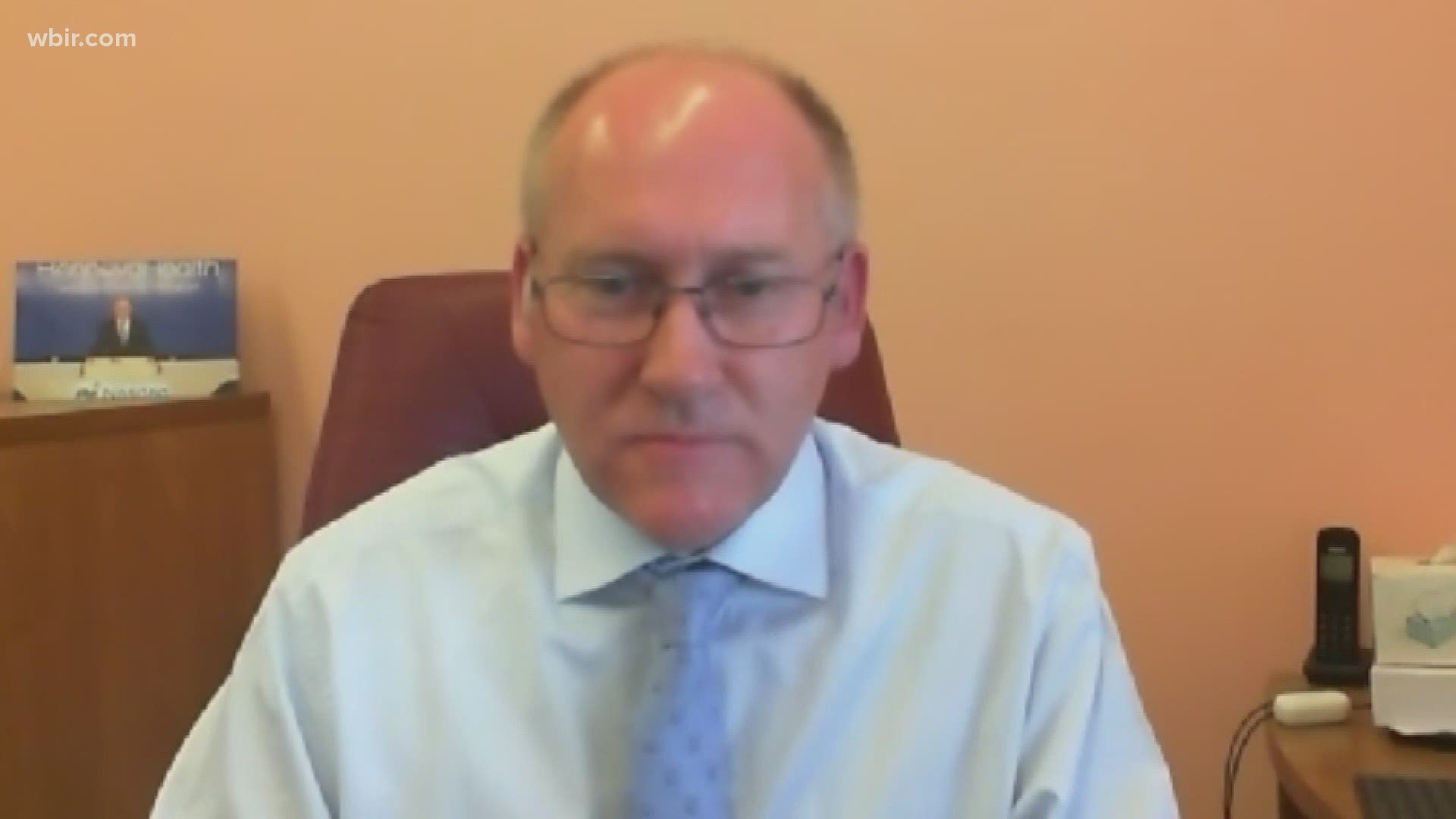 KNOXVILLE, Tenn. — The CEO of a troubled East Tennessee hospital chain said Thursday re-opening the Jamestown Regional Medical Center is central to the company's business plan, but will likely require millions of dollars it does not have.

Seamus Lagan said Rennova Health's other two hospitals in Oneida and Jellico would likely not have survived the first six months of the coronavirus pandemic without federal government assistance.

"We’re still here, we’re doing our best for employees and our patients and we have a plan that we believe will be very successful if we can get out the other end of this situation," Lagan said in an interview with 10News.

During its time in Tennessee, Rennova has faced enormous financial difficulty. In a June financial filing with the Securities and Exchange Commission, it said owed $49 million and spent $2 for every $1 the company took in.

"It’s not because we’re stubborn or stupid. We do see opportunity for this business to succeed," he said. "Look, there have been times that it would have been easier to throw the towel in."

Rennova said in May financial filings the federal government gave it $7.4 million in taxpayer money through the coronavirus relief fund, including a controversial $121 thousand for the closed Jamestown hospital.

At the time, it faced IRS liens of more than $4.4 million.

Lagan said Rennova has paid its financial obligations from this year on time.

Rennova's business model depends on the shared resources of three or more hospitals in the same area, so it has a pressing financial incentive to re-open the Jamestown facility, Lagan said.

But reopening is nearly impossible given Rennova's current financial state.

To prove itself to federal insurance regulators, the company would have to hire employees and re-open its doors without any insurance reimbursement, pending the outcome of an inspection process that could stretch months.

Lagan said that would mean a loss of $1-1.5 million for every month the facility is open before it is certified.

"We want to reopen it. We need to reopen it because our financial model, our business model works with three plus facilities," he said.

"We can't change the history. It’s closed. We just have to make sure that when we reopen it, we’re in a financial position to not have those some difficulties again."

He said it would not reopen until it had a definite timeline on approval from regulators.

In Late July, the University of Tennessee Medical Center signed a letter of intent to explore building a freestanding emergency room in Jamestown.

RELATED: Plan for Fentress County emergency room could be model for Tennessee

Company must "prove itself"

For nearly two years, employees at Rennova hospitals have protested perceived violations and failures at the facilities.

From a lab manager who said employees were forced to work 24-hour shifts, to a group of ex-employees at the Jamestown hospital who said taxes taken out of their paychecks never made it to the IRS.

"I don’t believe there have been any deficiencies in management," Lagan said. "This is a new sector for us so I will accept that there has been a part learning curve for us."

Lagan blamed delays in insurance reimbursement for medical services for the financial difficulties.

Without enough cash on hand, he said the company faced tough decisions: delay pay or close the doors.

"The hospitals we are currently operating wouldn't exist except that we've reopened them," he said.

Still, he acknowledged the company must now prove itself to employees, by continuing a recent trend of on-time payments.

He said a newly-opened management office in Knoxville will help attract talented managers and allow for centralized oversight of the hospitals.

The Irish native, who lives in the Bahamas according to court documents, said he has not visited East Tennessee since buying the three hospitals. He said the pandemic has delayed his plans to get a work visa from the American embassy, but insists he is eligible to travel to the United States and has before.

As part of the company's recent financial moves, its single largest investor forgave more than $18 million in debt in exchange for effective control of Rennova.

Weeks later, in an unusual move, Christopher Diamantis signed over his voting rights to Lagan.

Lagan said Diamantis made the move to "protect his interests."

"It's a significant trust that he's shown in us by assigning those voting rights to me," he said, adding that it would allow the company to be more nimble with its financial decision making and better allow for it to attract other investors.

In a July interview with 10News, Diamantis said he was just hoping to get his investment back—not make a return.

"“How will it end up turning out? Don’t ask that question of my wife. She’ll tell you that we’re never going to see a nickel, but I’m still very hopeful. I think we’re on the right path. I really do," he said.

Diamantis said he believes the company is now on a "rock-solid foundation."

"I hope that somewhere along the line people are appreciative that we stuck with it, rather than walking away from it," he said.

Diamantis initially agreed to do a follow-up video interview with 10News, but then declined after he signed over control to Lagan.