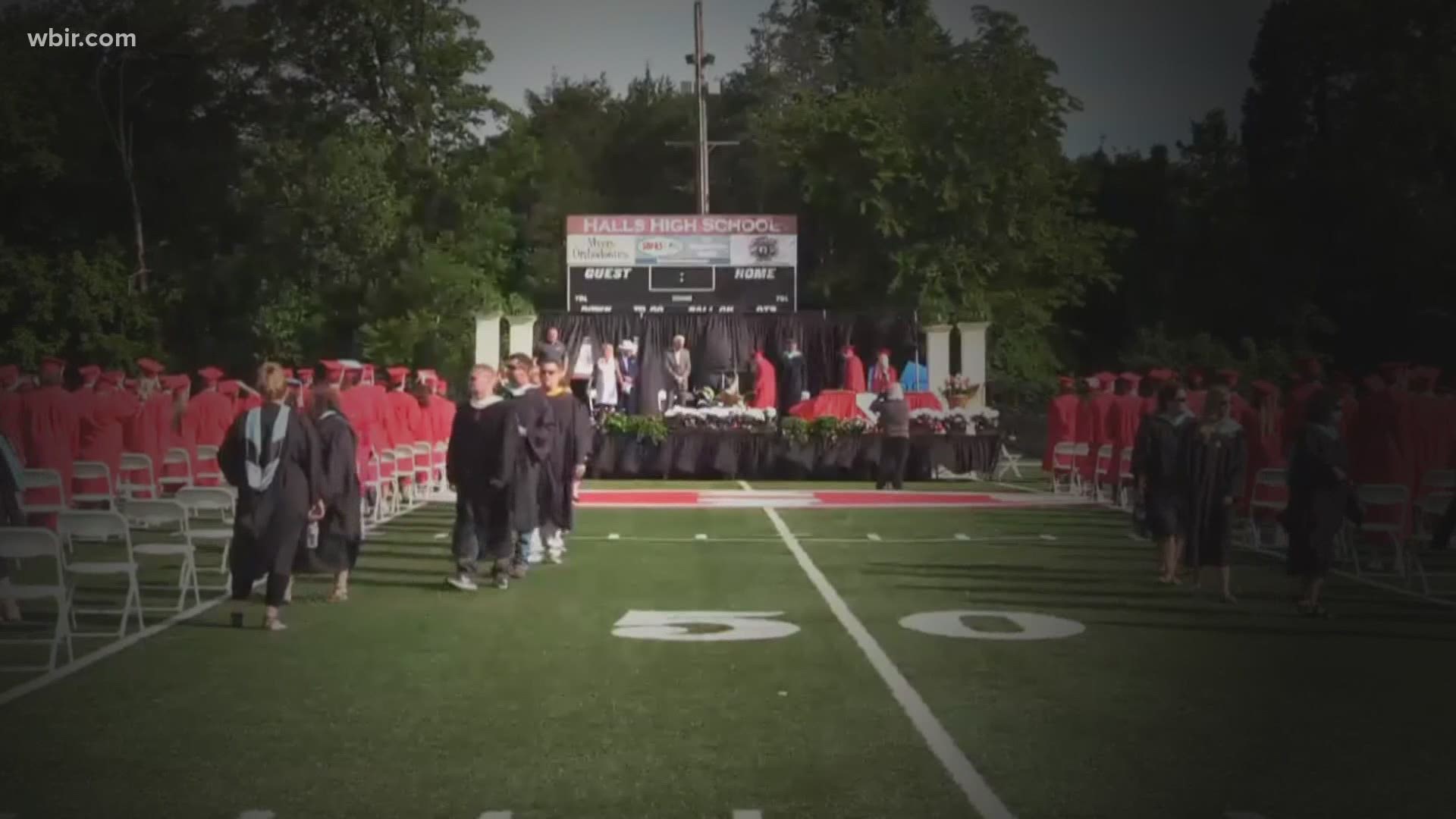 The hundreds of pages of emails, obtained by 10News through an open records request, give insight into the district's decisions about student and family safety in the midst of the coronavirus pandemic.

The district says it will release its plan for the upcoming school year at a Board of Education meeting Wednesday night.

The advent of the outbreak has disrupted public education across the state, from how classes should be held to what's appropriate for awarding high school degrees.

To understand how KCS decided to conduct graduations, 10News requested emails about the topic between the county mayor, key administrators, school board members and the county’s top doctor.

The records show an initial plan developed in line with Knox County Health Department recommendations was abandoned after a public backlash.

"I received nine angry messages within the first ten minutes of the communication going out, at this point I've lost count," school board member Kristi Kristy wrote school administrators.

Knox County Mayor Glenn Jacobs also objected publicly to the plan and held media interviews where he called it a "first draft."

It was replaced 12 days later by ceremonies that did not follow the Health Department’s guidelines. The district went from a plan that banned guests from ceremonies to allowing up to four invitees per student--and later not enforcing mask guidelines. The ceremonies also were held earlier in the summer than KCHD recommended.

In a statement to 10News Tuesday about the change in plans, a KCS spokesperson cited "extensive feedback" from the public and from Jacobs specifically.

"While the district was not aware of his objections prior to releasing our plan, Superintendent Bob Thomas met with the mayor and Knox County Commissioner Justin Biggs following its release. Working together, they were able to adjust the plan in a way that allowed broader participation by families and students," the statement said.

"In these unprecedented times, our goal has always been to support and celebrate the achievements of our graduates while also protecting the health and safety of our community."

As the district rolled out its at-home virtual learning model in early April, parents of seniors began sharing concerns about how graduation would work.

At the time, Superintendent Bob Thomas called it an "ongoing conversation." By early May, the administration felt it had a strong proposal and brought it to the Health Department.

"All, Danny [Trent, director of secondary education] and I had a very good conversation with Dr. Buchanan this afternoon," an email from Student Support Services Director Jason Myers reads after a May 5 meeting with Buchanan.

"Dr. B had only a few questions and is in support of the proposed graduation plan!" the email said, emphasizing her support in bold letters.

The next day, Wednesday, May 6, the district had composed a draft message for Thomas to announce the plan.

Among the event rules:

"Please know this is not an ideal situation and these plans could change depending on the guidance of our local and national health officials," the letter read.

"We are developing a contingency plan in the event we are not allowed to proceed as planned."

"Looks good to me"

Buchanan signed off on the announcement within seven minutes of receiving it.

"Looks good to me," she wrote to KCS communications director Carly Harrington.

"In addition to the Tennessee Department of Education guidance, the Knox County Health Department recommends schools:

At the same time, Thomas emailed school board members a copy of this Health Department-approved plan.

The only email response was from member Patti Bounds who raised concerns students with names beginning with letters late in the alphabet would walk the graduation stage with all classmates already told to leave campus.

That night, the district unveiled the plan to the class of 2020 and their families.

“Worst graduation in Knox County history. I think this plan is deplorable and a product of fear and self-preservation,” a parent told board members. “You have failed in an epic way.”

"I don't think it's an understatement to say no one is happy about it," board member Terry Hill told 10News the night of the release.

The next morning, emails show administrators held a call with Buchanan and the Health Department.

Hours later, Thomas' team had developed talking points for media interviews, outlining the specific recommendations it followed from the state and KCHD.

"Let families know that this is a fluid situation," the talking points read. "The Health Dept. will continue to make recommendations based on the local situation and public health data."

"We're still looking," Thomas told 10News. "If there's a way to follow these recommendations and allow parents to attend, ultimately, that's what we will like to see."

The emails, however, did not stop.

Friday morning, Jacobs' office notified media outlets he would address the graduation plan on an online video update to be posted later that day.

"I have asked for clarification regarding graduation," Harrington wrote her colleagues.

It's unclear whether she received any such insight before the mayor's office posted the video that afternoon. At 4:30 p.m., Harrington emailed her colleagues the verbatim script Jacobs read.

"I strongly feel that parents must be given the opportunity to be present at graduation," he said. "We must make every effort to hold graduation near the beginning of July as opposed to later in the summer."

Friday night, Thomas emailed the Board of Education again.

"While we feel our plan meets the TDOE and KCHD requirements, we know it is not an ideal plan and it has caused a lot of frustration with our families. Please know that we are continuing to work on a solution that would allow us to include a limited number of guests."

In an email the following Monday, May 11, Kristy addressed Buchanan directly.

"I don't think anyone in Knox County Schools feels like they have any choice BUT to follow the recommendations of KCHD," she wrote.

That perception appeared to change in the subsequent days.

RELATED: 'We did it' | Knox County seniors hopeful about new graduation plan

In a statement, the district said Thomas met with Jacobs to develop a revised plan.

But by May 13, the district had made up its mind: Graduations would stay on the high schools' football fields, but with guests in attendance.

Thomas told the school board the plan would allow a "limited number of guests" who would be expected to wear masks.

The Health Department told reporters it had not seen the full plan, the details of which would go against its previous recommendations.

Each student would be allowed four guests at ceremonies held on football fields between June 8 and June 20.

"Attendees will be expected to follow precautionary guidelines such as physical distancing among guests, wearing a mask or cloth face covering and staying home if experiencing fever, cough or other symptoms," his Friday night email to families said.

In a statement to 10News, the district said the new plan "included clear expectations that attendees would take safety precautions, and these expectations were reinforced on event tickets and signage."

But when graduations began, videos show most attendees did not wear masks. Superintendent Thomas was among those not wearing the recommended face covering on the graduation stage.

To be sure, students and parents celebrated the changes.

"The fact that we get to have our support system watch us makes a difference," South Doyle senior Lindsey Sterky told 10News.

"To know that my immediate family at least could be there made me feel better about the whole situation," said Riley Holden.

In retrospect, school board member Kristy said, it was good the district held the events early: COVID-19 case counts have only increased since graduations in June.

"I think there were a lot of lessons learned," she said of the process Tuesday. "I think everyone wants to avoid a repeat of the graduation scenario."

Ahead of the release of its full reopening plan Wednesday, KCS has said it will offer a virtual option to students this year. It will buy Chromebooks or tablets for every student to use in the district.

In a contrast to its decision process on graduation, the district sent an online survey to families and teachers soliciting their views on the upcoming school year.

RELATED: Oak Ridge seniors graduate - one at a time - in special ceremony