The three former captains have added plaintiffs to the federal case. They allege, among other things, that turnover has climbed on the KCS security force. 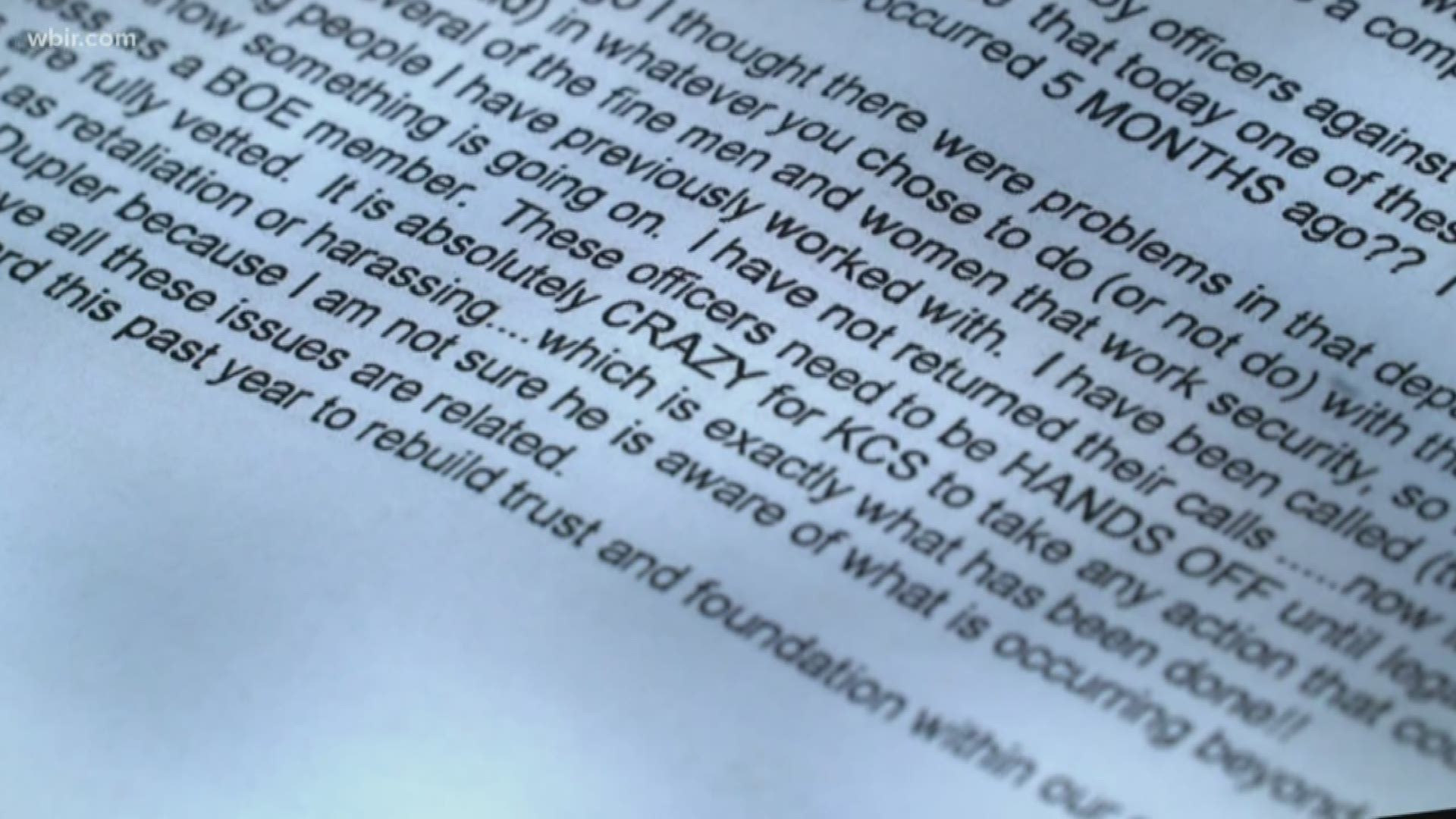 Joining the lawsuit first filed last year by Dan Stewart, Doug Ryerkerk and William Kee are Larry Grant and Davey Sanderson, who also formerly worked for Knox County Schools in schools security. The plaintiffs' latest, second amended complaint against Knox County and the school board was filed in June in U.S. District Court in Knoxville.

The men allege Paidousis, since taking over as schools security chief in 2013, has proved to be dictatorial, discriminatory, arbitrary and vindictive.

They allege that under his leadership there's been constant turnover on the security staff, tasked with ensuring children and teachers are safe at Knox County's dozens of schools. The school system sharply upgraded school security following attacks elsewhere against schools including the Newtown, Conn., school massacre in December 2012.

The school system has acknowledged in its master plan that it wants to improve retention rates of security staff members.

"It is a challenge to attract and retain quality school security officers based on contract length and available compensation," KCS spokeswoman Carly Harrington said in a statement this month to 10News. "This is why recruitment and retention of school security officers is a goal that is specifically referenced in our strategic plan. We will be examining appropriate strategies to address this concern in the coming weeks."

Responding to the lawsuit in general, KCS has said the former employees' accusations have no merit. This month, in response to questions by 10News, Harrington said the system cannot comment about pending litigation.

Stewart said Paidousis has punished employees who only wanted to do the right thing.

"It’s basically a case of employees who either heard or witnessed things in the workplace and reported them to their supervisors. And, as a result of the reporting, the reporters are punished, not the people who perpetrated the incident, who committed the act of – the policy violations in our school system.," Stewart told 10News.

In a secretly recorded 2015 conversation by Sanderson, Paidousis told him a small group of men -- "shit stirrers" -- were trying to disrupt changes and improvements he was trying to make to the program.

Knox County Schools has designed a security program that features an "authorized strength" of 105 personnel, according to Harrington.

There are about 100 "school security officers". They undergo law enforcement-style training in an academy.

The system has operated a security force for many years but expanded it about six years ago.

Harrington said the staff officers are not school resource officers like the police officers and deputies assigned to schools by the Knoxville Police Department or the Knox County Sheriff's Office.

The school board and county commission this month approved a new pact of cooperation about school security among the government agencies.

Kee, Stewart and Ryerkerk allege that under Paidousis' leadership it's been hard to assemble and keep a stable staff. Many veterans have left the force, they allege.

At the request of 10News, Harrington provided this month a breakdown of retention rates dating to fiscal year 2013.

Over the years it's ranged from about 77 percent to 91 percent per year, according to school figures. KCS also has never kept all of its new recruits from a single year, figures show.

For the most current year, KCS started with 104 and lost 20, according to school system figures.

Rick Scarborough, former Clinton police chief, is executive director of the Law Enforcement Innovation Center, part of the University of Tennessee Institute for Public Service at UT.  The 22-year-old center offers training and technical assistance for law enforcement agencies across the United States.

Scarborough, who took over the post in 2018, said it appeared generally that the turnover rate for KCS security officers was "close to average" compared with what traditional police organizations see in East Tennessee and in the nation.

Fifteen to 20 percent is the average, he said.

"In any other profession it would be alarming, but (there are) so many variables in law enforcement," he said.

Factors that can influence staff changes include politics, what the agency does, where it's located and the competing job market, he said.

Sometimes, staff members "realize the job wasn't for them," he said.

Expectations and the public attention associated with the job also can be a factor in prompting an officer to quit.

"As a chief, I placed the cost on on-boarding a rookie officer at approximately $22K," he said.

By the time the July 2016 class came along, retention rates began to improve, according to KCS. There were 10 graduates in that class, and figures released last year show they all stayed.

In June 2018, KCS had a staff that was largely white and male. At the time a department survey showed there were two officers who identified as mixed-race and four who identified as Hispanic, according to Harrington.

The amended complaint filed in June by attorney Dale Montpelier adds or expands on allegations against the school system, Paidousis and the Knox County Sheriff's Office, alleging former Sheriff Jimmy "J.J." or other personnel agreed to strip the men of their bond cards to take away their ability to carry a gun as needed in their basic duties.

The department did that, according to the lawsuit, because Paidousis asked for it.

The men allege that Paidousis then used the loss of their bond cards in late 2015 as a reason to show they were no longer capable of being on staff.

The former captains allege they sent an email Dec. 14, 2015, to each Knox County school board member complaining about Paidousis, his behavior and management style. Only member Terry Hill appeared to respond, they allege, questioning whether stripping them of their bond cards was a way "to be sure our three captains cannot keep their jobs?"

Stewart, Ryerkerk and Key allege there's a "pattern of shielding and protecting Paidousis over the safety and security of employees and the children who attend Knox County Schools" that "indicates some level of corruption the extent of which is currently unknown, but which does warrant class action certification in the interest of safety and security."

Grant and Sanderson have joined the amended complaint.

Grant is a former Knoxville Police Department sergeant who retired in 2008. He began carrying a firearm as a school security officer in 2012, according to the complaint.

The lawsuit alleges he tried repeatedly without luck to get a promotion with KCS. He alleges he submitted complaints that resulted in Paidousis retaliating against him. For example, he alleged that Paidousis discriminated against Grant by favoring a female over him. Grant also supported the three security captains to his detriment when they began challenging the chief, he alleges.

"As a result of the harassment and disparate treatment, Officer Grant has since been forced to retire," the lawsuit alleges.

Sanderson alleges he, too, has been punished after raising questions about department operations. For example, the lawsuit states, Sanderson learned in 2015 that security officers had gotten illegal moonshine from another officer in the security division while out at the KCSO firearms shooting range.

In November 2015, the men allege, Sanderson met with Paidousis to talk about what was happening at the department.

Sanderson recorded the conversation, according to a disc obtained by 10News.

Paidousis talked about what he'd been trying to do since becoming chief in 2013. He said some officers, which Stewart, Ryerkerk and Kee say is a reference to them, wanted to cause trouble.

After reporting about the moonshine transaction, Sanderson alleges, he endured a number of punitive job transfers. He complained he was the target of discrimination.

In 2017, he was assigned to a class in which his duties included caring for severely disabled children, according to the lawsuit. He was put in the position of changing female students' diapers by himself, the lawsuit states.

He felt uncomfortable doing that and declined to sign a training form on changing diapers, the lawsuit states. He was then terminated.

The lawsuit has been assigned to U.S. District Judge Travis McDonough in Chattanooga.

Both sides have been directed to try to resolve their differences through mediation rather than go to trial, which is not uncommon with civil lawsuits.

A report in May shows two mediators have so far tried without success to resolve the original complaint.

KCS and the former officers have been ordered to report back on their progress in September. Trial, if it is necessary, will take place in November 2020, according to a scheduling order.

The captains and Grant seek damages. The lawsuit seeks a new job assignment for Sanderson.

The lawsuit also names Tom Cox, a former KCSO deputy, as a defendant in claims by the captains and Sanderson. Cox is named for his alleged role in helping to strip the captains of their bond cards.

The captains' personnel files show Knox County Schools had separately reprimanded to varying degrees each of the three captains for at least one incident in 2015.

Records show Stewart had been put on leave with pay in 2015 from an incident in December of that year when he told a high school principal there likely was a gun present on campus considering the number of students present. He also began discussing an unrelated investigation during a meeting with a student and his mother, according to records.

His actions were deemed unprofessional.

According to the document, that stemmed from an incident that apparently happened in the fall of 2015, Kee acted "in an unprofessional manner" and was "uncivil to a coworker," according to the file.

Kee also earlier in the year had been suspended with pay for several days for failing to secure his school-issued gun and leaving it unattended in his car, resulting in its theft.

The Knox County Board of Education meets on Wednesday, Jan. 10, 2018. Changing four elementary school zones was on the agenda.

The only recent complaint in Capt. Ryerkerk's file had been from May 2015.

Paidousis began his employment with Knox County Schools in mid-2013, when he took the position as chief of security after a career with the Knoxville Police Department. He replaced Steve Griffin, who retired in the midst of an investigation into an inappropriate relationship he had with a vendor who sold security equipment to KCS.

Paidousis had been deputy chief of KPD's Criminal Investigation Division. He'd spent three decades with KPD and grew up in the Knox County Schools district.

Paidousis' personnel file consists mainly of his resume and documentation related to his hiring process from 2013.

In his 2013 application for the position of KCS chief of security, Paidousis said he had "an outstanding, high energy work ethic, committed to truthfulness, good decision maker and exercise attention to detail and follow through."

In May 2018, Paidousis submitted his resignation to schools administrators. Soon thereafter, however, he changed his mind and was retained.