He was convicted of murder by a jury of his peers within three hours, then the judge stepped in

He admitted to shooting his stepson in the head. The jury found him guilty, but the judge made a shocking announcement that had all sides astonished. 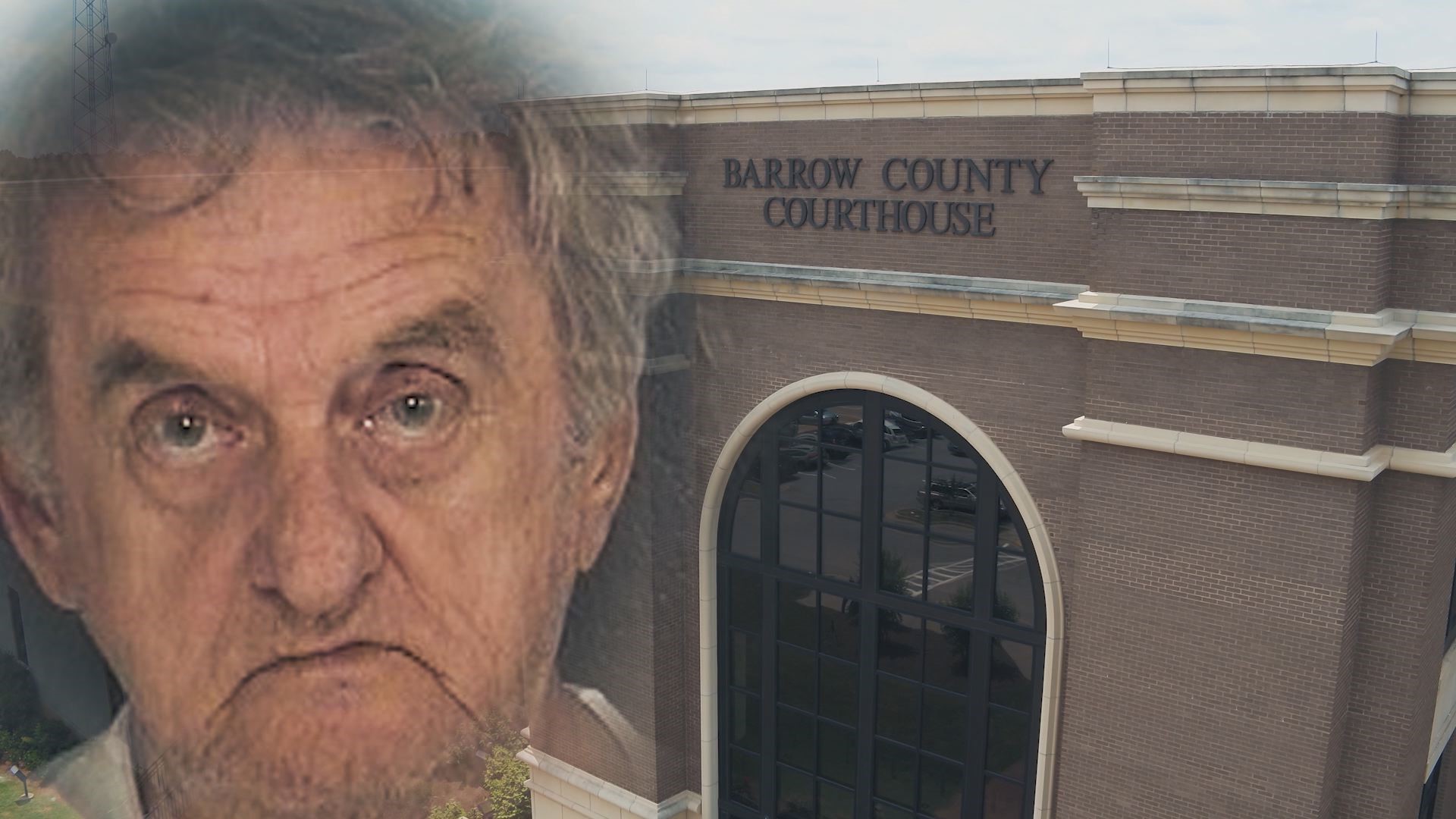 BARROW COUNTY, Ga. — In October 2018, a Barrow County jury convicted Paul Hamilton of shooting and killing his adopted son. But, instead of sentencing Hamilton to life behind bars, former Chief Superior Court Judge David Motes essentially reversed the jurors’ verdict by declaring himself the 13th Juror, and then filed his own motion for a new trial.

The Reveal uncovered it's an extraordinary power given to Georgia judges some believe is eroding the public’s trust in the criminal justice system.

The victim is 34-year-old Brandon Lay.

His former girlfriend, Teddi Taylor, was there when the shooting happened.

Their relationship escalated quickly, moving in with each other weeks after they were introduced by friends.

“From the day I met him, we never left each other’s side. It was just that click. It was absolutely wonderful,” said Taylor.

All that changed when a few months later, the couple decided to go to an abandoned trailer in Barrow County at night on October 17, 2015.

It’s a home Lay grew up in, but didn’t own. Taylor says Lay went to the trailer to get old belongings he believed was still his.

“I said, ‘Brandon, something is just not right,’” said Taylor. “I feel like somebody is watching me. He said, ‘Well babe, go sit in the truck.’”

Someone was watching. Three deer hunters nearby with guns, who asked them why they were trespassing.

“Brandon come running out of the house, and he goes, ‘Stall them… tell them we’re not stealing,” said Taylor.

The hunters did not believe them and threatened to call police on behalf of trailer’s owner.

Bullets then start to fly.

“Oh my god, it was awful! Because, I’ve never been shot at,” said Taylor. “I could feel one go in like part my hair.”

Hunters claimed they started shooting after Taylor and Lay got inside their U-Haul moving truck and started ramming their pickup truck to get away.

As they were fleeing, kitchen utensils Lay and Taylor took from the trailer fell out the back of their U-Haul, littering the intersection of Old Hog Mountain and Charlie Hall Road - about a mile away.

Barrow County deputies responded to the trailer and met its owner, Paul Hamilton. The 78-year-old told deputies he was prepared to take the law into his own hands if he found them first.

“He told us, ‘If I find them before you, you’re going to have the call the coroner.’ And, as your viewers may know, when you call the coroner, someone is deceased,” said Barrow County Sheriff Jud Smith. “I believe that Paul Hamilton had it in his mind that, ‘If I catch these folks, I’m gonna kill them.’”

A few hours later, Lay and Taylor returned to the intersection in a small brown pickup truck to retrieve the items that fell out from the back of their U-Haul.

Just as they arrived, Hamilton pulled up in his white Lexus, blocking Lay and Taylor’s truck.

Hamilton got out of his car with a revolver in his hand. According to investigators, Hamilton walked up to the truck and put the gun through the driver’s side window.

“Paul Hamilton pulls back. Brandon pushes me back and he shoots him in the temple. And, as soon as he did it, he said I shot that mother [expletive] deader than [expletive],” said Taylor.

Deputies took Hamilton into custody and they discovered Lay wasn’t just some unknown alleged home burglar. The two know each other well.

“Paul was Brandon’s step father, his uncle actually, but he adopted Brandon when he was six months old. He knew Brandon,” said Taylor.

Hamilton told investigators he either didn’t recognize or see Brandon’s face before he pulled the trigger. The two had not spoken in years.

“When we were interviewing him about this, [Hamilton] said, ‘Is this gonna delay me going out of town?’ He had a cruise to go to,” said Sheriff Smith.

Eight days later, Hamilton’s girlfriend posted a picture of themselves on Facebook outside a cruise ship.

“Yea, he went on a cruise after the shooting that he paid for months and months before that.” Jeffrey Sliz, said Hamilton’s attorney.

During the trial, his defense attorney, Jeffrey Sliz told the jury his client went to the intersection to retrieve his belongings and confront the people he was told burglarized his trailer.

Sliz claimed Hamilton didn’t wait for the police because he was trying to make a citizen’s arrest. Sliz said his client walked up to Lay’s truck, not because he intended to shoot him, but because he feared for his life.

“In my opinion, I don’t think Paul Hamilton was in any danger, wasn’t in any imminent danger of anything. The victim, Brandon Lay, never brandished a weapon,” said Sheriff Smith. “Paul Hamilton had the gun, Paul Hamilton pulled the trigger and Brandon Lay died and that’s how the jury saw it.”

Steve Charters was one of those jurors, who sat for a week listening to testimony in Hamilton’s trial.

The 54-year-old engineer says what took place at the intersection is what mattered most to he and his fellow jurors.

“They were in the vehicle, they couldn’t go forward and run him over, all he had to do was step away. Why did [Hamilton] keep fighting with them and put the gun in the vehicle to begin with?,” said Charters. “There was no threat. The threat came from him.”

After closing arguments, Charters and the rest of the jury took three hours to reach a guilty verdict.

“I said when I walk out of that room, I had to be able to go home and sleep at night and in my opinion, we got it right,” said Charters.

Twenty days later, Hamilton returned to the courthouse for Judge David Motes to hand down Paul’s prison sentence, which was expected to be life in prison.

Sliz said he told his client what to expect.

“It was over. We were there just putting the candles on the cake. The party was over,” said Sliz.

But then, something strange happened.

According to trial transcripts, Judge Motes announced: “Mr. Hamilton, the Court is not done… I will tell you that when the jury returned with its verdict of guilty I was so surprised… I believe there were errors that were committed in that trial... Mr. Hamilton, I’m going to grant you a new trial.”

Those who were in the courtroom say everyone was shocked at the decision, including Assistant District Attorney Sarah Griffie.

“The State objects to literally all the things that just happened in this courtroom,” said Griffie.

“Well, Ms. Griffie, you are as surprised as I was the day Mr. Hamilton was convicted,” said Judge Motes.

“I mean, I’ve never had it happen to me in 44 years trying criminal cases,” said Sliz.

What Judge Motes did is essentially declare himself the 13th juror. It allowed him to override the other 12 jurors' verdict. It’s an extremely rare move and an extraordinary power provided to judges. It can be done with little notice and little explanation to the public.

► PREVIOUS | In one of final acts on bench, judge names himself 13th juror, overturns murder conviction

It also comes with a lot of scrutiny.

“Tried by a jury of your peers, and they got it right, and he yanked it out from under them,” said Sheriff Smith.

“The judge told us, 'You the jury are the finders of facts, you determine what happened here," said Charters. "And for him to be able to throw that out, it doesn’t make sense."

After Judge Motes ordered a new trial, Hamilton bonded out of jail and remains so today. A week later, Judge Motes retired from the bench.

“This is his last case and he goes out with a bolt,” exclaimed Sliz.

There’s another twist to the story. Hamilton is a former associate magistrate judge in Barrow County.

Some believe Motes showed favoritism toward Hamilton because of his time on the bench.

“Anybody that could do that after seeing the evidence, God bless their soul. He’ll burn in hell evermore,” said Taylor.

Judge Motes declined to do an interview, but did answer a few questions when approached at his home this past July. The Reveal went to his home because we were unable to reach him by phone.

Motes said he likely crossed paths with Hamilton in the past, but claimed he did not know him personally.

Motes also said he wished he would have been more clear and detailed in his order for a new trial, but declined to provide any further explanation.

The Barrow County Prosecutor’s office declined interviews for this story too, but they did appeal Judge Motes’ ruling.

This past May, District Attorney Brad Smith appeared before the Georgia State Supreme Court to argue why Hamilton’s murder conviction should stay.

Smith points out a specific part of the sentencing transcript where Motes referenced something that never happened during the trial.

According to the transcript, Motes said, "I remember one witness not admitting that methamphetamine would have affected her perception of any of the these events at all and that troubled me."

“That is imaginary evidence. Teddi Taylor is the only witness that talked about methamphetamine use, that question was never asked of her… she never said anything about that,” said Smith.

Sliz says meth did come up during the trial. It may not have come up exactly the way the judge articulated, but Sliz says investigators did find syringes in Teddi’s purse.

“So, I don’t think the judge thought they were very credible in their recollection of what happened,” said Sliz.

Brandon Lay did have a history of felony theft and drug arrests. But Sheriff Smith says his criminal history should have no merit in the judge’s decision to order a new trial.

“I’m not trying to paint the picture that Brandon Lay was a pillar of the community. He had his demons and he had done stuff, but still at the end of the day, you can’t shoot somebody like that,” said Sheriff Smith.

While extremely rare, a judge in Cherokee County also declared himself the “13th Juror” in a 2018 criminal case.

The case involved former actor Corey Sligh, accused of child molestation in 2016. A jury found him guilty in July 2018.

Cherokee County Judge David Cannon said he believed he made a mistake by pushing the jury to make a decision after multiple attempts of agreeing to a unanimous decision.

The Cherokee County District Attorney’s office appealed the decision and it’s currently pending before the Georgia Court of Appeals.