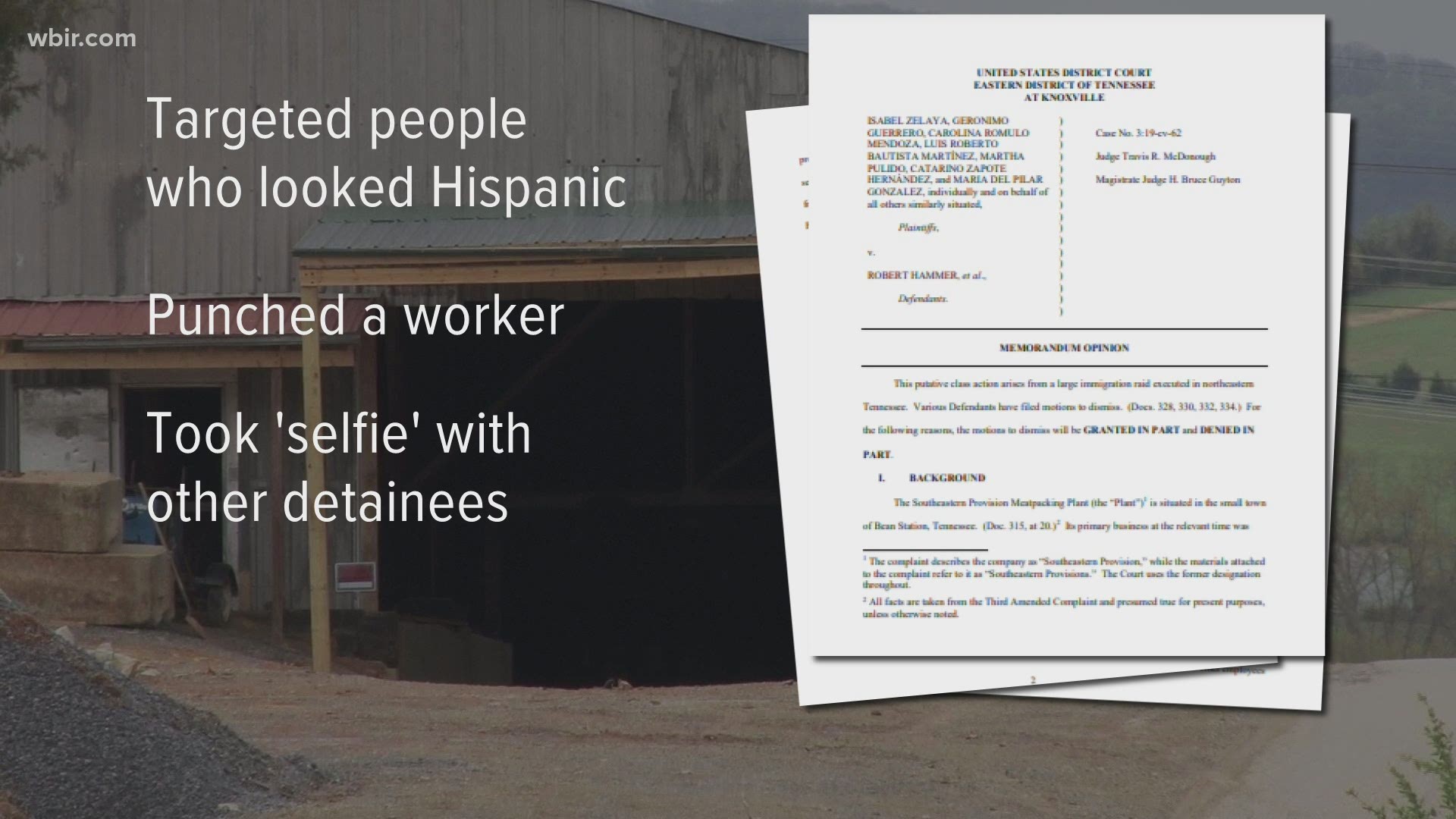 RUTLEDGE, Tenn. — When federal agents and the Tennessee Highway Patrol began raiding the slaughterhouse where she worked, Victoria Contreras knew her life would change forever.

"My world was shut down during that moment," the undocumented immigrant from Mexico said.

In the years since the April 2018 raid, Contreras has faced legal limbo and an unexpected, nearly two-month-long detention away from her young family.

The actions of the federal agents during the raid have led Contreras' former coworkers to file suit against specific agents and the federal government, alleging racial discrimination and unlawful search and seizure.

In a late-January opinion, a U.S. District Court Judge ruled parts of their lawsuit could move forward. A trial date is now set for late September.

In his opinion, Judge Travis McDonough wrote "Racial discrimination has a long history in this country. But the federal judiciary is, both by design and blemish, a less-than-perfect institution to address this history."

He suggested a higher court might intervene to address agents' searches and seizures based on skin color.

The class action-style suit, filed on behalf of seven named workers at the meatpacking plant, seeks a judgment against the Immigration and Customs Enforcement and Homeland Security agents and Tennessee Highway Patrol troopers involved in the raid.

It also alleged agents yelled racial slurs at the workers, who it said feared for their lives as agents pointed weapons at them and a THP helicopter circled overhead.

"I think that yes, we can say they were abusing their power," said Contreras, who is not involved in the lawsuit. "[Law enforcement members] drew their firearms at some people and some of them were pulling people by their shirts or arms and the workers were not doing anything wrong."

Contreras described watching agents from ICE and the Internal Revenue Service drag her boss and hit him.

In the lawsuit, the details of which were first reported by Knox News, a worker said one agent "took out his phone and took a picture of himself with the Latino workers in the van, yelling 'selfie!' while he snapped the shot."

The suit said white workers were not detained and allowed to move freely about the property while Hispanic-looking employees were taken to a nearby armory, regardless of their immigration status.

"The workers were not doing anything wrong for them to abuse their authority and it’s wrong they did it that way," Contreras said.

The government has not filed an official response to the lawsuit.

A judge previously sentenced the slaughterhouse's owner to 18 months in federal prison for tax-related crimes. Records show James Brantley, 63, was released in January.

The raid on Grainger County's Southeastern Provisions was one of the largest immigration sweeps in the nation. Records show 97 people were detained. Some undocumented workers left the country voluntarily, others were deported.

At one such check-in this past February, ICE agents arrested her unexpectedly.

"I gave them all my belongings and they told me ‘you have been detained,’ and I asked why, and they told me ‘my boss says you’re staying, you have the chance to fight your case once you get to Louisiana,'" she said in Spanish.

Contreras said she was not allowed to tell her kids where she was for days.

She spent nearly two months in federal custody before being allowed to return to her family.

"I felt like I was born again," she said of the reunion.

She said she wished law enforcement officials involved in the raid -- and others in the community -- would treat people equally, regardless of immigration status.

"We are humans," Contreras said. "The beautiful thing would be if people would start looking at us as humans and not as weird or strange people, regardless of where we come from."