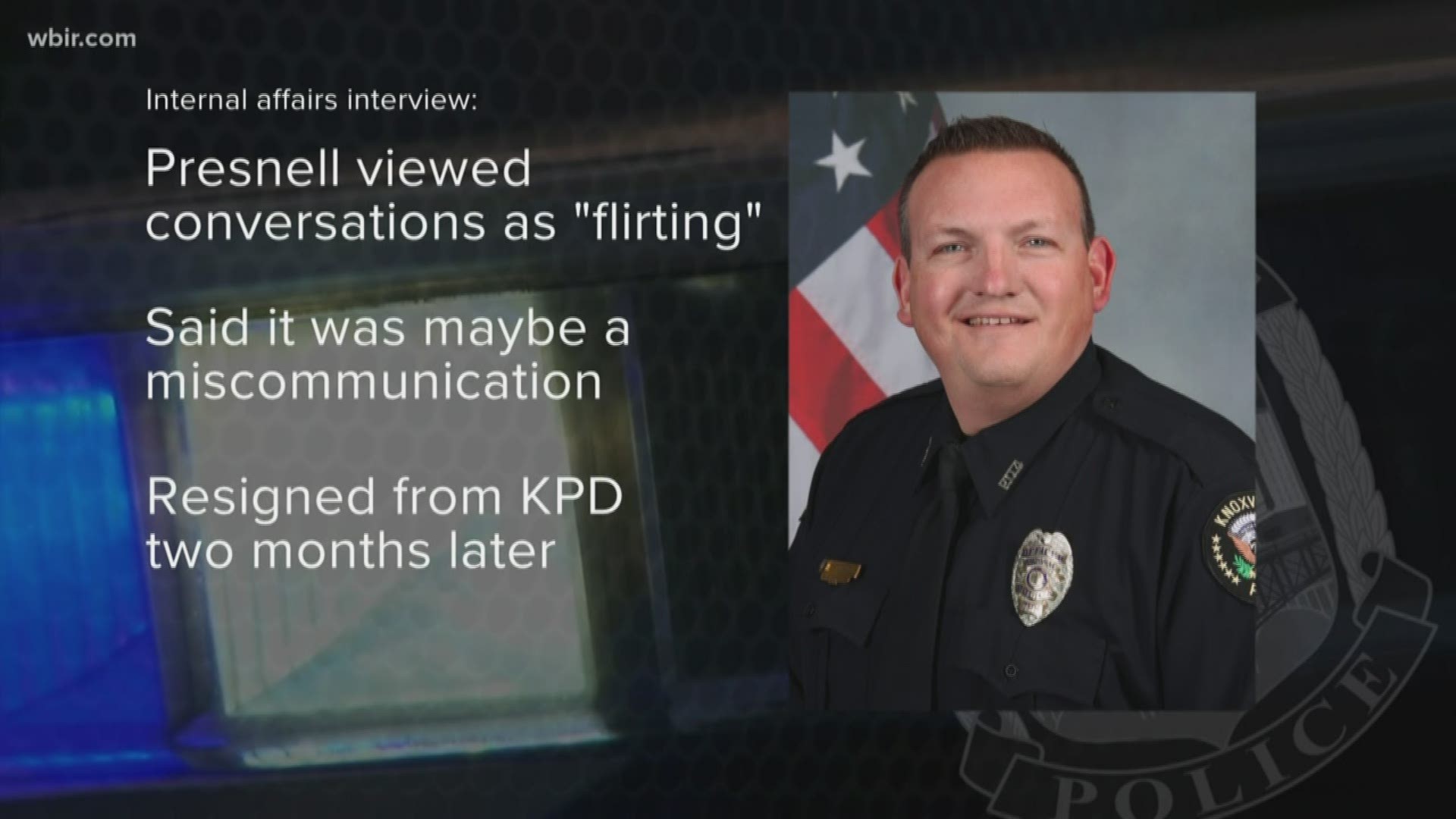 KNOXVILLE, Tenn. — A Knoxville grandmother said a now-former city police officer made sexually inappropriate comments and harassed her at her North Knoxville home. Her 2016 report prompted an internal affairs investigation and led to a review of the officer's behavior to assess whether a crime had been committed.

Sheila Baker, 55, asked for Officer Lawrence "Larry" Presnell's help dealing with her grandson after he made a traffic stop outside her North Knoxville house.

A week later, she was sitting down for an interview with the Knoxville Police Department's internal affairs unit, detailing inappropriate sexual comments and repeated visits she said Presnell made to her home.

Presnell is one of ten KPD employees investigated for inappropriate sexual behavior since 2014, a 10News investigation revealed.

"He asked if I 'mingled' because we was talking about how busy I am with the kids and everything," Baker said in an interview with 10News. "I was like 'yeah sometimes I get out with a friend or whatever,' but I don’t think that’s the kind of 'mingle' he was talking about."

Baker said Presnell returned the day after the initial meeting and appeared to hold his hand over his department-issued microphone on his waistband while speaking with her.

She said he went on to ask her more inappropriate sexual questions.

"He asked me a question about my boobs," Baker said. "I took my hands and I kind of shoved him. My face was red. I mean total red."

"That one time he said 'If I knock on your door again, I was hoping that you’d be on a nice little sexy lingerie,'" she said.

Baker said she "shut down" when Presnell made these comments. It was especially difficult for her, she said, because a family member sexually assaulted her when she was a child. Her encounter with Presnell, in uniform, caused her to have nightmares, she said.

In the days after, Baker said she noticed Presnell began to drive by her house repeatedly over the next few days.

An internal affairs review of the in-car camera in Presnell's cruiser showed he drove down her street more than 30 times in 10 days.

"I started locking my door," Baker said. "All week long I locked my door."

Another KPD officer told Baker to file a report. She agreed.

"If something was to happen to me, they would know who to look for. They would know, you know what I mean? It was scary," Baker said.

"I don’t want no trouble, I just want this to stop," she said she told investigators. "I want this man to stay away from me."

"They're supposed to protect people"

In his interview with KPD investigators, Presnell told investigators he viewed his conversations with the woman as "flirting." He said it was perhaps a miscommunication.

Within two months, he had resigned from the force and the investigation stopped. The office of District Attorney General Charme Allen quietly reviewed the case, but in September 2018 declined to bring charges against Presnell.

10News reached out to Presnell for comment, but didn't hear back.

Baker said she's disappointed with how the investigation played out.

"I don’t think it was right that he just resigned and he was all done with," she said. "They just let him resign."

Chief Eve Thomas previously said through a spokesperson, "We stand behind the decisiveness of our actions when complaints of alleged misconduct are received and the thoroughness with which those investigations are conducted."

Credit: WBIR
The Knoxville Police Department opened in 1969 on Hill Avenue, including a jail on the second floor. It originally was a place for police and fire administrators.