The veteran KPD officer was placed on administration leave with pay in mid-August. He's still on leave, pending the outcome of an internal investigation. 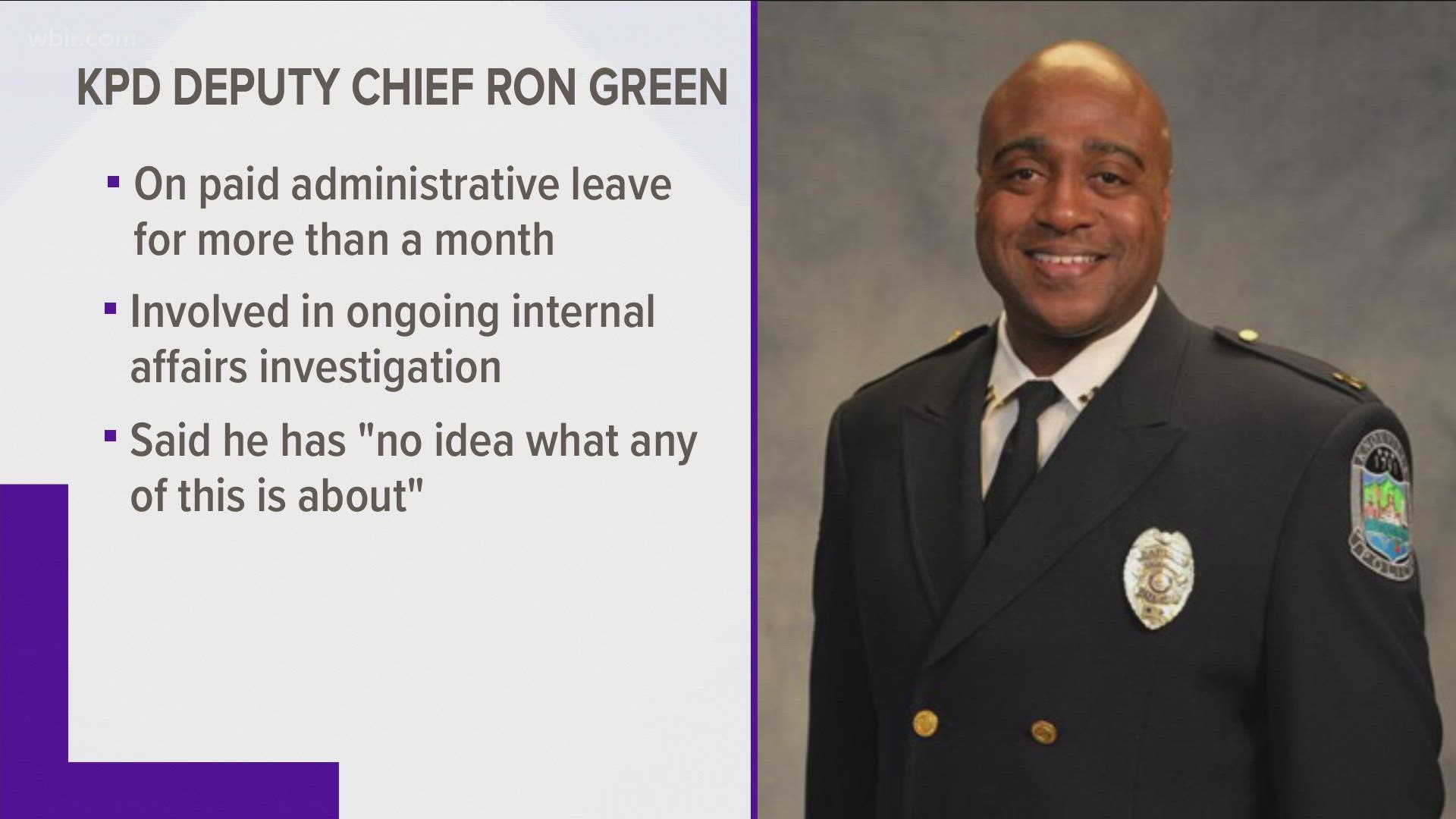 KNOXVILLE, Tenn — FRIDAY UPDATE: In mid-August, the Knoxville Police Department inexplicably placed one of its highest-ranking officers on administrative leave with pay.

A KPD spokesperson said he "cannot elaborate on the nature of the internal investigation or offer additional comment while that investigation is still ongoing."

10News is continuing to ask questions regarding the nature of this investigation.

Here is what we know as of Friday:

• On August 13, KPD Chief Eve Thomas sent Green a letter informing him that he would be placed on administrative leave for five working days with pay.

• Green is not allowed to work any extra jobs while on administrative leave, according to the text messages.

• Thomas texted Green "it is not good for you or the Dept to be on extended admin leave."

• Green texted Thomas he still has "no idea what any of this is about anyway."

We also don't know, so we asked for Green's personnel file. Twenty-seven years of documents revealed how he rose from through the department's ranks from recruit to deputy chief.

Records show this isn't the first time he's gotten in trouble. He was reprimanded for a "preventable with negligence" automobile crash, not doing enough traffic enforcement, accessing explicit websites on city computers and violating the department's take-home vehicle policy.

In his early days, annual performance evaluations showed a new officer who is reliable, professional and dedicated to the force. A supervisor wrote he has "good potential for promotion through the PO ranks" in 1995.

The next year, he received his first oral reprimand for an automobile accident. The review board told him in a 1996 letter that it found the accident was "preventable with negligence."

He was in the lowest 25% of his unit in terms of productivity that spring. He was promoted to police officer that fall.

Records show he improved in many areas the following cycle. He was awarded "Officer of the Month" in July 1998 and received multiple letters appreciating his work.

"[He has a] shallow understanding of supervisory problem solving + disciplines," one rater wrote.

"Shows no skills in being able to carry out the responsibilities," wrote another.

His average score on the oral board examination was a 2.41/5. He was officially promoted to sergeant in December 1998.

Performance reviews from 2000 to 2003 show he struggled with his new position.

In June 2002, he was reprimanded because he "failed to perform required traffic enforcement during the Memorial Holiday Traffic Enforcement," according to documents.

He wrote a detailed response to the reprimand, citing staffing issues as the main reason for his unit's low number of tickets.

That fall, he was suspended without pay for 10 days for violating a number of city and department policies.

Internal affairs documents said he admitted he would "randomly put female names onto a city computer and search the website under 00domain.com to see what would come up under whatever name he was searching."

The report goes on to say he would enter names such as "Icandy" and pornography would be associated with the name.

Then-Sgt. Green said he attempted this "10 to 20 times" and that he would "attempt to X out of them, but pornographic sites would continue to pop up on the screen."

Records show he also accessed inappropriate sites such as Man Cow that were "sexually explicit in nature." Ten other police officers were reprimanded during this investigation.

In the years that followed, formal reviews said he was "in tune with department procedures and policies" and that he had "learned from his mistakes."

He was promoted to police lieutenant in 2005 after his supervisor recommended he apply for promotion opportunities.

From 2005 to 2010, his performance reviews were mainly positive, describing an "excellent patrol supervisor" who "leads through enthusiasm, [has] excellent motivational skills and constantly strives for excellence."

In 2012, he received his third documented reprimand for violating the drive-home vehicle policy. Documents said his "actions brought discredit on the department."

In 2014, Green's performance review was nearly perfect. A reviewer wrote he is "indicative of a supervisor who is prepared to advance in this organization."

Shortly after, he was selected for a promotion to captain.

His superiors wrote in subsequent performance reviews that he adapted to his new role well. They said he was eager to learn more and take on new responsibilities.

He was promoted to deputy chief in 2018.

"Ron Green through his career at KPD and in his position as District Commander has demonstrated that he possesses the skills and abilities required of this position," Chief Eve Thomas wrote as her reason for selecting him.

His review the following year said he was progressing in his new position and always willing to learn more.