Today, Austin-East students will return to school for the first full day of classes since the shooting. 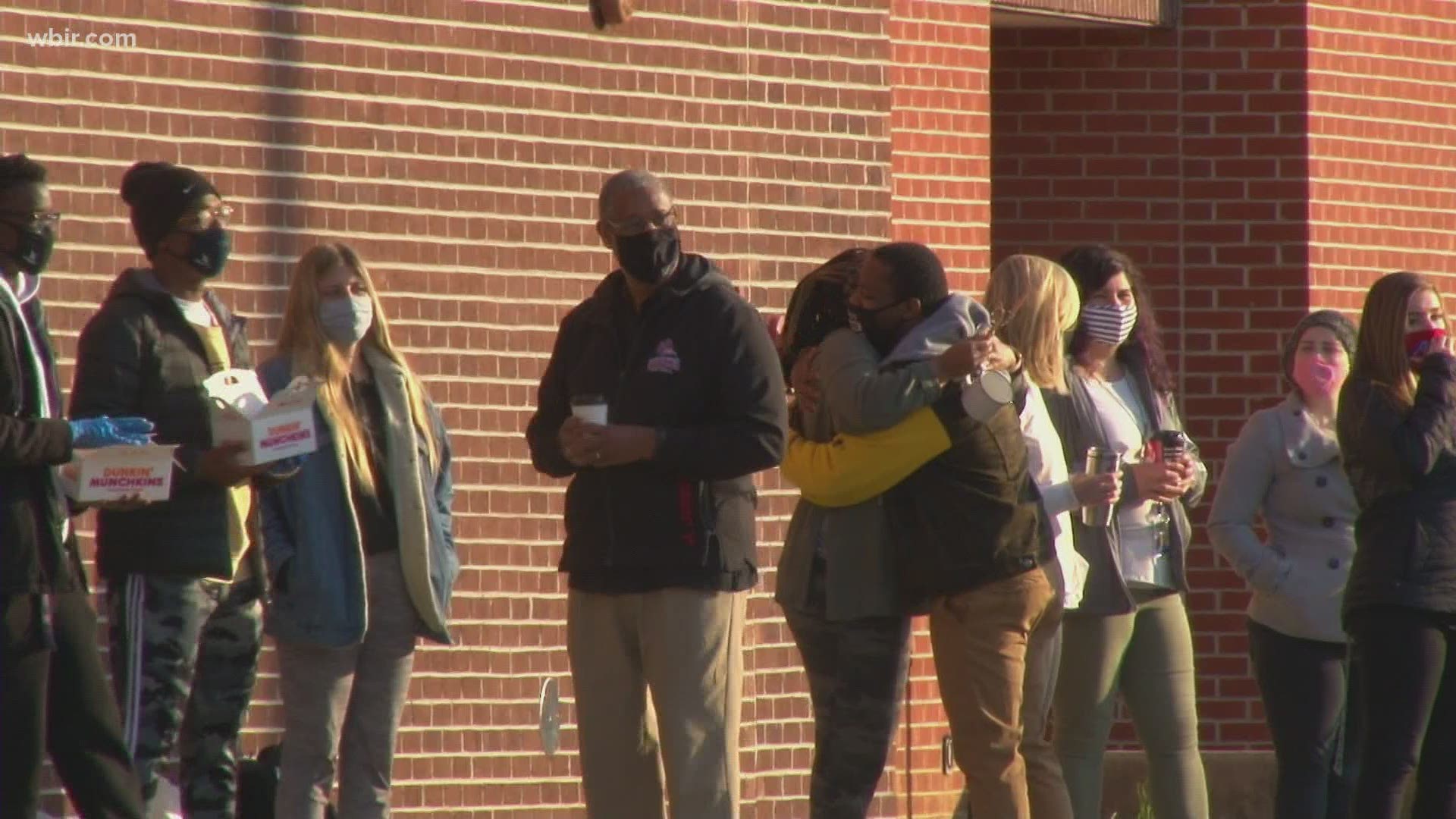 Classes at the high school were canceled in light of the shooting, which has now been extended out to Monday, April 19. Students are scheduled to move to online-only learning on Tuesday and Wednesday.

Today, Austin-East students will return to school for the first full day of classes since the shooting.

"Do what's best for you and your family," school board member Evetty Satterfield said. "If you have kids that want to come and be with their teachers, we're here and our doors are open. If you have kids that need that time to process what happened and take care of themselves, do that as well."

She said she and other district leaders are making mental health a top priority as students ease back into school.

"We know the greatness that comes out of Austin-East. We are A-E strong," Satterfield said. "We're just down at the moment, but we will rise and we will we will see the outcome in the light of the better day."

Principal Nathan Langlois said that security at the school will increase. All students will be searched and checked with metal detector wands by school security when they arrive daily now. All entrances and exits will also be alarmed, and personnel will be assigned to appropriate outside locations.

The clear backpack policy remains in effect, and students will continue entering and leaving school through the Performing Arts wing.

On Monday, April 19, the high school announced it would extend online learning through Wednesday, April 21, but bring students back to the school for a 90-minute session. It said learning would take place "asynchronously" so students have an opportunity to participate in grade-level class meetings with their advisory classes.

The school said students would return on Thursday and Friday, April 22-23 for state testing.

All students will report to advisory at 8:30 a.m.

Virtual students will need to report for their state exams as well.

Please review the following information pertaining to A-E learning for the remainder of the week. pic.twitter.com/G9xI6dfQAC

KCS said the decision to extend class cancelations was made to be supportive of the school community and provide an opportunity for healing.

It's the latest shooting in a string of gun violence incidents since January that have gripped the Austin-East community and claimed the lives of other students who attended or formerly attended the high school.

Thomas offered his thoughts and prayers to the family of the student and wounded officer, saying they are trying to figure out how to prevent something like this from happening again.

"I've thought about it since January. I'm tired of talk. Whatever it takes to get an action plan to start seeing some results," he said.

As to what that plan looks like, Thomas was somewhat at a loss -- saying he feels it would need to involve a larger community-wide effort in Knoxville to address safety in schools.

"We've got to try to figure out what to do to end this violence. It's got to be more than a school effort. It's a community effort," he said. "It's been a feeling of helplessness. Obviously, I didn't get a lot of sleep worrying about this last night. It's a difficult job to protect everyone, and obviously, you can't foresee every threat."

The Tennessee Bureau of Investigation, Knoxville Police Department, and KCS have not said how the student was able to bring a gun into the school Monday before gunfire was exchanged between him and police. The school had recently taken extra measures to increase security in and around the school in light of the other recent shootings involving students, including increasing visible KPD officer presence and implementing a clear bag policy.

The school had also recently upgraded its camera system.

KCS Security Chief Paidousis said there were two school security officers (SSOs) assigned to the school who are specially bonded deputies that are on duty and armed only during their assigned school duties -- saying that authority does not extend when they are off the clock. They differ from School Resource Officers (SROs), who are full-time sworn law enforcement, and Paidousis said SSOs are there to develop relationships with young people and act as role models on top of providing security.

Paidousis said they are talking with KPD to see if there was more that could have been done to provide protection in the future. The school system is also looking into the possibility of installing metal detectors at the school but said that would create a host of challenges and complexities that would need to be worked out due to the time spent needing to check students and staff.

Thomas also addressed complaints and concerns from parents about the school system's communication during the shooting, saying they "should have done a better job" letting parents know about the developing emergency situation and lockdown. Thomas said there was conflicting information during the initial response that caused reporting delays, and other schools in the vicinity of Austin-East had been put on lockdown as a precaution but said the school system should have still alerted parents nonetheless.

KCS leaders said at the end of the day they are working together to ensure Austin-East students are safe when they return to school. Thomas said they will make sure extra counselors, security, and support staff will be present if needed.

After the press conference Wednesday, Thomas released a series of tweets on Twitter.

I am deeply saddened by the pain that the Austin-East community has endured in connection with the shooting that took place on April 12. The outpouring of support from across the district has been a tremendous blessing to the Roadrunner family during this difficult time.

Grief counselors have been available to students and staff for weeks.

According to Thomas, additional counselors will be there as long as needed.