Records from Knox County Schools show a communication "breakdown" that led to a more than one-hour delay before Knoxville Police responded to the school. 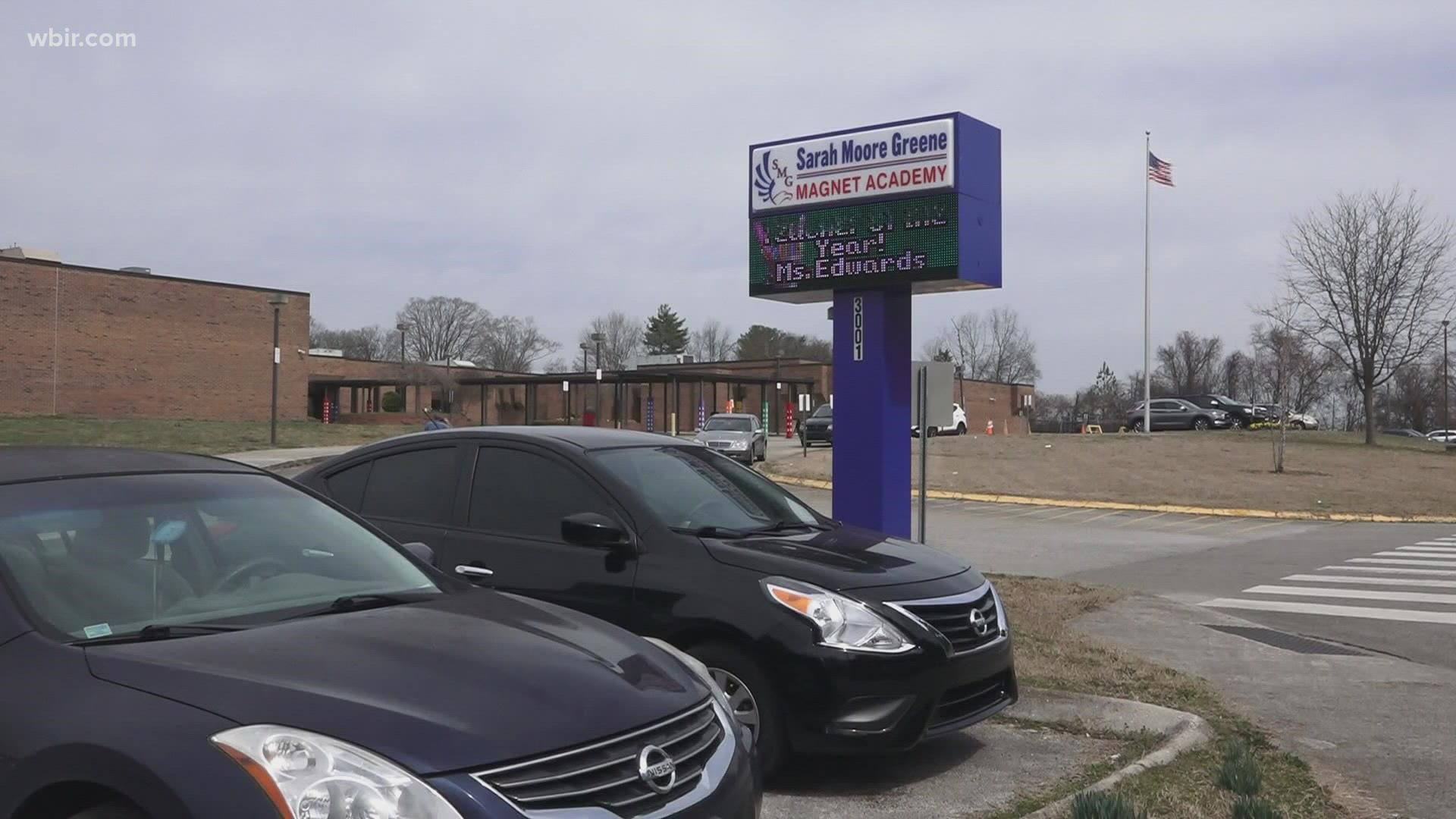 KNOXVILLE, Tenn. — Contradicting his employer, a Knox County Schools security officer disputes actually knowing someone had fired a gunshot outside an East Knoxville school in March as children played nearby, records show.

The unnamed officer insisted in a rebuttal letter to an internal investigation that staff debated whether they heard a gunshot or a car backfiring after a car chase in the Sarah Moore Greene Elementary School parking lot March 9.

The KCS report reprimanded the officer to report gunfire when told about it—and that the officer's failure to do so led to a "breakdown" of communication and security protocol.

The incident led frightened teachers to rush students inside from the playground and raised frustrations over the police response. Security video showed a flash from one of the vehicles and KPD found a bullet casing near the scene, records show.

Details about what people knew -- and didn't know -- are contained in internal records WBIR obtained this week and requested months ago. The district redacted the name and gender of the school security officer involved.

It took more than an hour for KPD officers to arrive on scene, records show, because dispatchers didn't know there was a shooting at the school, a spokesperson said.

Audio from calls to emergency dispatch show the officer reported the disturbance from a car chase in the school's parking lot and, eight minutes later, sounds of gunfire in the neighborhood behind the school.

The officer did not tell dispatchers there was a shooting in the school's parking lot, audio showed. Records show KPD didn't arrive on scene for more than an hour after the first call, even as the school remained in lockdown.

The officer did not want the district's report included in his or her professional file.

"My actions on this day were based on the best interest of the students," the officer wrote. "I believe this incident can be a learning experience for many departments, not just the position of SRO. I do not believe my actions warrant any disciplinary action."

The documents show the district disagreed.

"Part of the breakdown is why didn't you tell 911 [sic] that there were shots fired and you didn't call dispatch so that there could be the backup plan," a professional communication record from the district said.

The district refers to the officer's initial report which detailed a car chase and shooting in the parking lot.

The officer first called the Knoxville Police Department to report a car chase in the parking lot at 1:22. At 1:30, the officer called back and reported hearing shots fired in the neighborhood behind the school. The lockdown of the school would have been around the time of the second call, records show.

In the letter opposing the district's report, the officer wrote that the principal didn't report shots fired. Between the first call at 1:22 and the second call eight minutes later, the officer said staff debated among themselves whether "they heard a motorcycle backfire or gunshots."

The officer did not call the Knox County Schools Security Chief until 2:09, 47 minutes after first notifying emergency dispatchers.

In the meantime, the woman who said she and her son were the shooting targets filed a report at Knoxville Police headquarters. A KPD officer called the school at 2:12 to convey her report of the shooting, records show.

At 2:33, more than an hour after the first reports of the incident, KPD officers arrived at the school, the documents said. It was still in lockdown at the time.

The district gave the Sarah Moore Greene officer seven "follow up" points to be included in his or her file, records show. Among them: