"It's in all of our neighborhoods. It's people that we go to school with, we go to church with, we work with because it's internet-driven for the most part, and it's a demand-driven issue," TBI Director Mark Gwyn said. 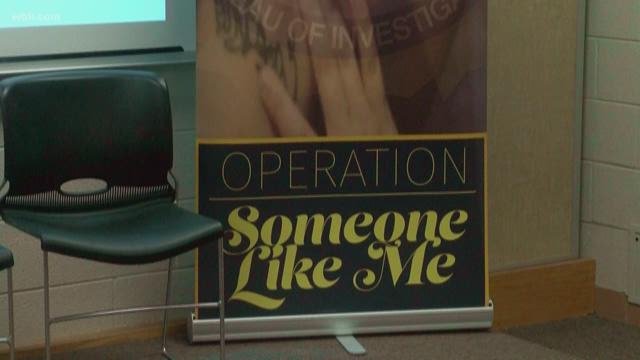 According to the Tennessee Bureau of Investigation, human trafficking is the second-fastest growing criminal industry in the state, just behind drug trafficking, and it's happening in every city and county in Tennessee.

"It's in all of our neighborhoods. It's people that we go to school with, we go to church with, we work with because it's internet-driven for the most part, and it's a demand-driven issue," TBI Director Mark Gwyn said.

Gwyn is passionate about putting an end to human trafficking.

"Many of these young ladies who are caught up into this web of human trafficking can no longer protect themselves," Gwyn said.

"Our number of arrests are increasing with each operation and that's unfortunate, but it's the real world that we are living in," Gwyn said about the frequency of cases.

Gwyn added that each operation takes anywhere from 40 to 50 special agents. It's time consuming, but it's worth it for Gwyn.

"It's disturbing. It's a part of our society that most people don't want to really believe that's out there, but it is and we can't ignore it," he said.

MORE: She vanished right near the local high school; then she was sold for sex

Gwyn added the crime is not done in the public eye, it's happening on the internet behind closed doors. He said most traffickers are using the website backpage.com.

"All we have to do is put up on the website an underage girl and we'll get more responses than sometimes we can handle. That's the sad part about this," Gwyn said.

According to the Community Coalition Against Human Trafficking, human traffickers use persuasion, force and threats to get what they want.

"Often times there are not physical chains that are binding these women or men or children to their trafficker, it happens through manipulation and coercion," said Kate Trudell with CCAHT.

MORE: 'Motivation' is in jail for sex trafficking; hear his warning to parents

SAVING GIRLS: Teens are being bought and sold for sex, but you can help

Trudell said most of their clients are adults, but they do often see minors, as well. They call these women survivors.

"This past year 25 percent of our referrals have been minors, but the average age that we are identifying and serving victims is more in their mid 20s," Trudell said.

She added most of the survivors, traffickers and buyers end up being from the same community or are already familiar with one another.

Gwyn agreed, saying, "They are not men driving in from different states."

The TBI has a strong message for those men.

"If you live here or if you don't live here, then when you go on that website and you think you are purchasing an underage young girl you may very well be purchasing a TBI agent. That's our goal," Gwyn said.