She called 911 when a plane crashed. 'They put me on hold'

ATLANTA — The pilot saved an untold number of people when he made the last decision of his life.

On December 20, the Cessna C-560 jet had just taken off from Fulton County Airport and never got higher than 2,385 above the ground before it crashed and exploded in Atlanta’s English Park.

Witnesses described a last-second flip and turn of the doomed jet, steering it away from the crowded intersection of Fulton Industrial Boulevard and Donald Lee Hollowell Parkway, just a block from hundreds of cars on the West Perimeter/I-285. Instead, the twin-engine private jet clipped several tree limbs before breaking up and exploding upon impact with the otherwise-empty ball field. 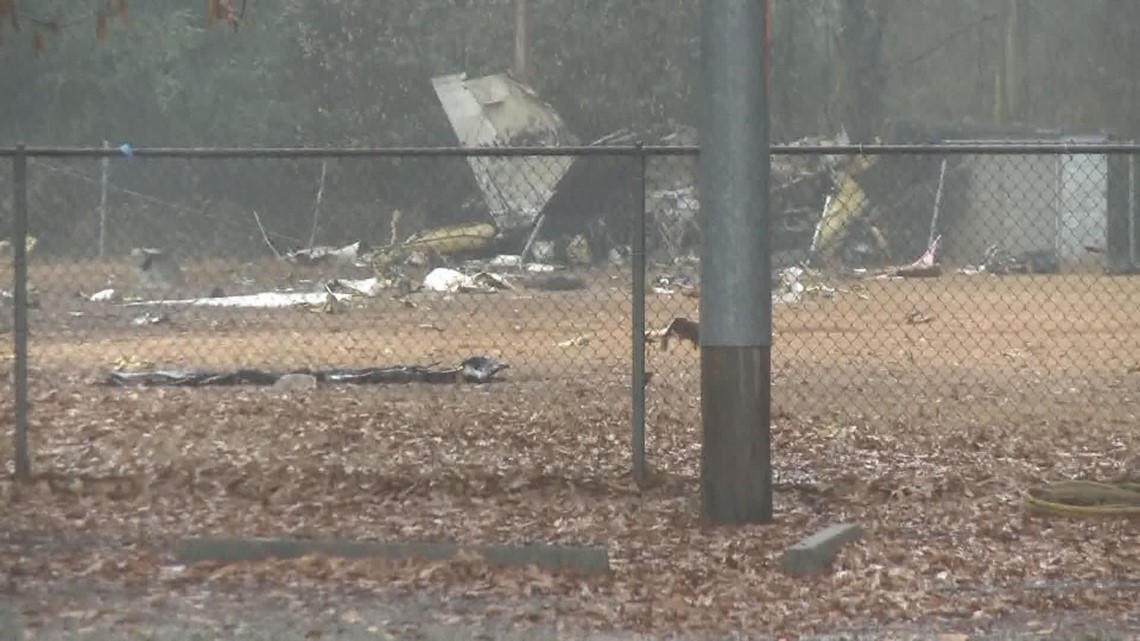 All four people aboard the jet were killed instantly, but no one on the ground was hurt.

“That man saved our lives by flipping that plane,” said Deborah Bounds, a delivery driver who witnessed the crash and was one of the first to report the explosion to 911 - but she reached the wrong 911 center.

Deborah Bounds’ 911 call hit a cell tower across the Chattahooche River. As a result, her call and at least two others were answered by Cobb County 911.

It took an average of 23 extra seconds to transfer the three emergency callers who reached Cobb County 911, but the second 911 center to which they were transferred was also the wrong jurisdiction.

The crash occurred in the city of Atlanta, but multiple emergency callers either reached Fulton County 911 directly or were transferred there by Cobb County 911.

One caller reached Atlanta 911, only to be erroneously transferred to Fulton County 911, and then back to Atlanta 911. Each time, the transferred callers had to tell dispatchers where they were and describe what had happened.

In some cases, the callers had to tell their story three times to three different dispatchers, if they were lucky enough not to get the busy message at Atlanta 911.

“I mean it’s horrible,” Bounds said of the experience. “I don’t understand how you could reach the wrong 911 center. How can you be put on hold by 911 when it’s an emergency?”

The answer is simple. That’s how the 911 system was designed, nationwide.

PREVIOUS | Lost on the Line: A possible fix to the broken 911 system

“Today we still route your 911 call not on where you’re standing – what jurisdiction you’re in – we route your call based on what cell tower you’re connected to,” said Chuck Spalding, the 911 director in Palm Beach County, and an national-recognized advocate for fixing the problem.

“If my daughter’s stopped breathing, and I dial 911, the last thing I really want to hear is, ‘hold on, I need to transfer you,’” Spalding added.

Shanell Anderson had no idea she was talking with the wrong 911 center as her submerged SUV filled with water in December 2014. She spent her last breaths frantically describing the pond in which she entombed – the sound of water overtaking the phone before the line went dead. Her call hit a tower in Fulton County while she was drowning in Cherokee County.

The delays created by the misrouting of her 911 call cost 19 minutes and Shanell’s life.

It was four years ago that we took Shanell’s case to the Federal Communications Commission in Washington, D.C. The chief of the Public Safety & Homeland Security division of the FCC told us that routing calls by the caller’s location, rather than the cell tower’s address, was not feasible. “That would not provide a consistent enough lowest common denominator,” the FCC’s David Simpson told us.

In other words, the 911 system was designed to work 100 percent of the time, even when the least-capable phone reaches the least-capable emergency call center. As a result, the 911 system did not take advantage of the nearly-ubiquitous smart phone technology when determining which call center answers the 911 call, or in locating the caller using the smart phone’s GPS capabilities.

Shanell Anderson’s death was a wake-up call for the 911 system, and it's still cited by the FCC as an example of where 911 is broken. Her death spurred inventors to tackle the problem and rapidly fix it.

LaaSer 911, an Atlanta-based company created as a direct result of our investigation in 2015, developed an elegantly-simple invention to fix both the routing of 911 calls and the problems locating cell phones in an emergency. They have received six US patents to date.

Google and Apple, meanwhile, have offered up smartphone-level location features to the cell phone companies to use when locating Android phones and iPhones during a 911 call. None of this is currently used to route emergency callers to the correct 911 center, only to improve location data once the dispatcher picks up – even if that dispatcher can do nothing but transfer the call.

There’s new leadership at the FCC, and the commission has taken the first step toward properly routing emergency calls. Last year, the FCC issued a Notice of Inquiry for Location-Based Routing (LBR) for 911 Calls. The measure indicates the FCC is in the early stages of drafting new regulations that could require cell phone companies to route 911 calls based on the caller’s location, not the tower’s address.

“911 misroutes are not occasional or isolated, and in fact occur frequently, often with deadly consequences,” the FCC wrote in its Notice of Inquiry.

The FCC specifically cited our 2015 investigation, and Chairman Ajit Pai described Shanell’s desperate call to the wrong 911 center. “In an emergency, every second counts,” Pai wrote. “But too often, those seconds dribble away because a wireless 911 call is misrouted. Just ask the family of Shanell Anderson.”

The FCC estimates that 10,000 lives could be saved every year by shaving one minute from response times nationwide.

Tens of thousands of emergency calls reach the wrong 911 center every day. The proof is on each dispatcher’s screen, where there are multiple ‘hot buttons’ to quickly transfer callers to neighboring jurisdictions.

The FCC cited data from 911 centers large and small. In Snohomish County, Washington, 94,600 calls were transferred from that county’s 911 center in a single year. The average delay to get callers to the right dispatch center was 40 seconds, resulting in 1,051 hours of delays during emergencies – some of them life and death.

The California Office of Emergency Services tracked more than 3.7 million transferred 911 calls statewide in 2017, according to data cited by the FCC. That’s nearly 4 million Californians who reached a dispatcher who couldn’t send help without calling someone else.

The problem of 911 misrouting is the opposite of isolated. It’s universal.

It’s also worse in metro areas like Atlanta, where the movement to incorporate new cities has created a patchwork of smaller, closely-packed jurisdictions.

Fulton County Airport is a perfect example of the deadly problem.

The airport is tucked in a corner where three jurisdictions intersect. A plane that crashes on any of the runways would be in Fulton County’s jurisdiction.

Which 911 center picks up during such a crash currently has less to do with where the emergency caller is standing, and more to do with which cell tower picks up the signal.

The Marjory Stoneman Douglas Commission, launched after last year’s massacre at the Florida high school, recommended forming massive regional 911 centers, perhaps even as large as the state of Florida itself. However that solution only mitigates the problem.

“There’s always a border, always an edge,” said Spalding, who runs a countywide 911 system made up of 16 interconnected call centers.

A statewide 911 call center would still pick up calls misrouted from Georgia and Alabama by cell towers just over the state line in Florida. Meanwhile, dispatchers in Tallahassee would have no knowledge or familiarity with local street names or landmarks in West Palm Beach or Jacksonville.

This problem was frustratingly evident on many calls during the Parkland school shooting, when Broward County 911 dispatchers mistook ‘Parkland Stoneman Douglas’ high school for an intersection. “Stonan and Douglas?,” one dispatcher asked. Another thought it was the intersection of Parkland and Douglas, and then asked, “in what city?”

The only real way to fix the misrouting of millions of 911 calls is to make the phone’s location part of the decision process. That’s the location-based routing the FCC is proposing.

While location-based routing of 911 calls is entirely feasible with today’s technology, some phone companies told the FCC that we’re stuck with the old system until Next Generation 911 is deployed nationwide.

Verizon filed a response to the FCC, concluding that “cell sector-based routing will be needed for the foreseeable future.” Verizon encouraged the FCC to “support the use of existing best practices to improve and maintain the reliability of cell sector-based routing.” The company pointed to the many stakeholders in the 911 system and asked who was going to be responsible for upgrading it.

AT&T wrote that the company “shares the Commission’s concerns about misrouting of wireless 911 calls.” AT&T said it is “committed to ensuring that wireless 911 calls are promptly and properly routed to an appropriate [911 call center] so that help can quickly be on its way.” But AT&T also suggested that Next Generation 911 will largely solve the problem, writing “the FCC should not prescribe any particular location-based technology requirements at this time.” AT&T also suggested a ‘best practices’ approach to mitigate the symptoms of misrouted calls until next-generation systems can be deployed.

Sprint, T-Mobile, and other phone companies had similar responses to the FCC.

What all of this means is that we are closer to a solution than we were four years ago, but if you call 911 today – when your life may depend on the speed of the response – your emergency call may still be picked up by a dispatcher who cannot send help.

The delays in fixing the way 911 calls are routed will continue to delay response times, especially in areas close to a jurisdictional border.

Deborah Bounds knows how it feels to be put on hold by 911 because of a required transfer. She watched four people die in that jet crash. While the response would not have made a difference that rain-soaked day last December, she is still haunted by the seconds waiting to reach the right 911 center.

Bounds’ particular model of phone has one of the 911 solutions built into its software. The phone companies just haven’t enabled that feature for improved call routing.

“If they have the technology, they need to implement the technology, because of all the lives they could be saving,” Bounds said. “I mean, seconds count when there’s an emergency.”

LOST ON THE LINE: An 11Alive Investigation

► Why 911 is broken
► Why 911 is still broken
► 2 years after tragic 911 death, what's changed?
► Lost on the line: Local communities rolling out tech that helps 911 find you
►Lost on the Line: The credit card-sized device that could save your life