Trooper disciplined for secretly filming young woman, driving to Nashville to pick up personal records while investigating his boss

The state investigated Trooper James McKilligan last summer. Authorities suspended him for six days without pay, a term that's since been cut to three days. 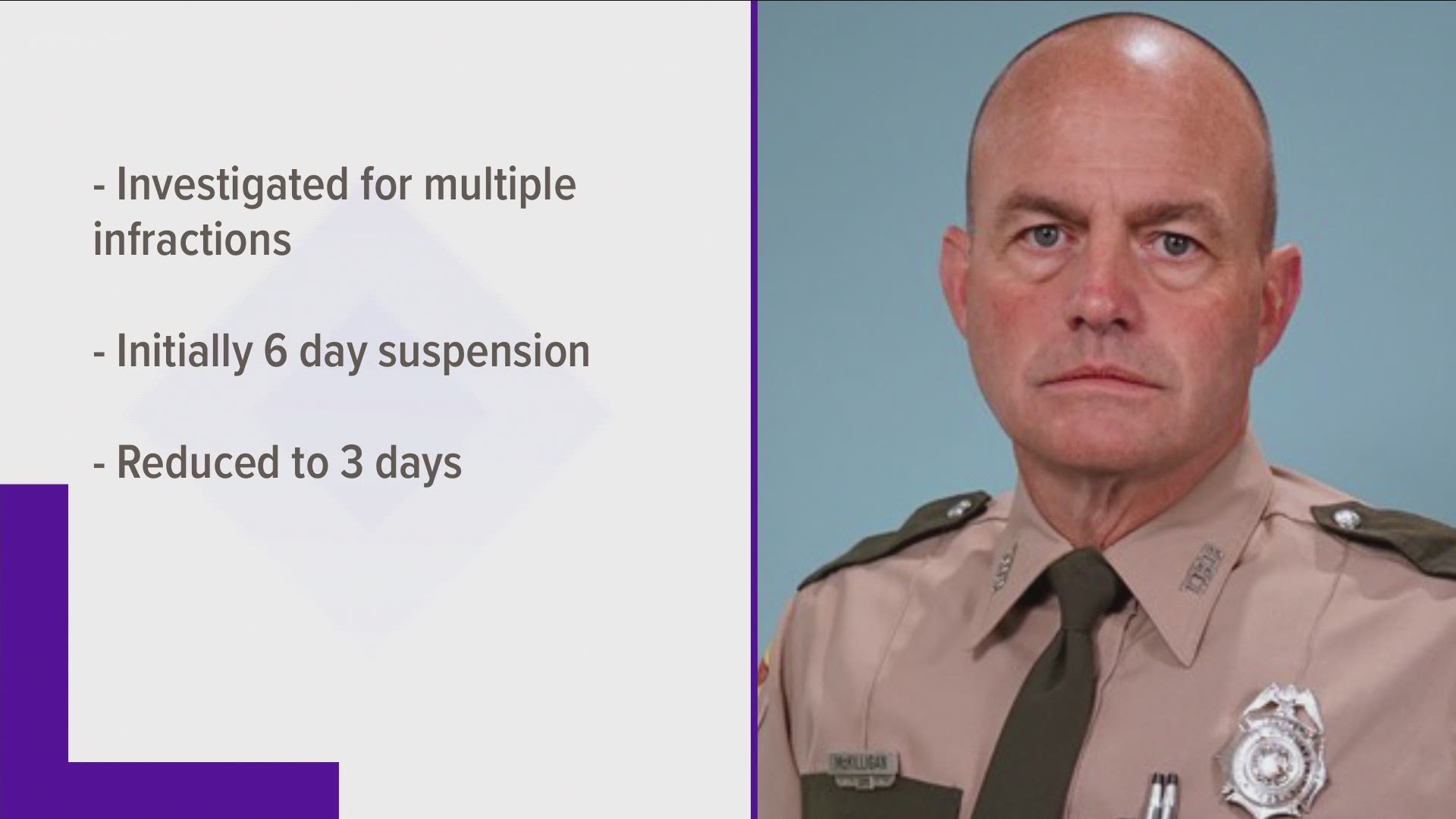 KNOXVILLE, Tennessee — An East Tennessee trooper used his cruiser camera to film a young woman he found attractive as she pumped gas, and he also made a personal trip to Nashville to pick up records when he was supposed to be on duty in Knoxville, documents show.

The state investigated Trooper James McKilligan last summer for multiple alleged infractions. Authorities then suspended him for six days without pay, a term that's since been reduced to three days without pay.

McKilligan has been a trooper since 2016 and was based in Sevier County.

On July 7, 2019, while stopped at a Weigel's gas station and talking with a co-worker on the phone, the trooper spotted a young woman he liked by a silver car.

You can watch the video here.

"Holy ----!" he exclaimed before trying to work the camera.

"Hold on, don't say anything," he said to the co-worker as he fiddled with the device.

McKilligan then moved his cruiser in the parking lot so he could get a better look at the woman, estimated to be between the ages of 16 and 23. He zoomed the camera in for a closer look, a copy of the video shows.

The trooper didn't speak to the woman.

His conduct at the gas station was but one reason the state decided to investigate him. The balance of its review focused on his behavior while pursuing his own workplace harassment investigation against a lieutenant, records show. The nature of that alleged harassment isn't clear.

McKilligan filed an open records request with the Department of Safety and Homeland Security to get correspondence between Lt. Russell Smith, his supervisor, and others.

On July 12, 2019, he drove to Nashville in his cruiser, while in uniform, to retrieve those records. He also stopped on his way back home at the department's training center and used a THP copy machine to make about 1,000 copies, the investigation found.

"This act was a misuse of department supplies and equipment while on unauthorized time away from work," a final disciplinary order states.

McKilligan  at the time was supposed to be working in the Knoxville area as part of a special seat-belt enforcement operation. He'd been reminded ahead of time by Smith that he needed to take part in the July 12 event.

Instead of participating, however, he told a sergeant he'd been called to Nashville on business. He claimed eight hours of work that day, but the investigation found that his real purpose in going to Nashville was to pick up the records for his own complaint against Smith.

Then, on July 22, 2019, McKilligan started out for Nashville to get another batch of documents in his state patrol vehicle while off work. A supervisor questioned what he was doing, so McKilligan turned around and switched to his personal vehicle to complete the trip, records state.

He thought he was justified in using his cruiser because "he alleged he was told by HR investigator Andrea Smith if he felt threatened he did not have to use his chain of command.

"Trooper McKilligan stated he felt threatened because he found an envelope under the windshield wiper of his patrol vehicle while the vehicle was parked in at his residence. The envelope contained the picture of an email he had requested from his chain of command," records state.

The trooper thought he was under surveillance.

By then, THP administrators had begun to wonder what McKilligan was doing. The following day, a sergeant looked at videos recorded in his cruiser, finding those of the young female at the gas station as well as recorded conversations the trooper had had with fellow troopers and supervisors about work.

He made the work recordings as part of a record for his investigation about Smith, documents state. He couldn't recall how many such recordings he'd made, records state.

"Troop McKilligan recorded these conversations to memorialize the conversations as a precaution to protect him and hold his supervisors accountable for what was said," records state.

On July 22, a supervisor ordered the trooper to write a memo explaining himself "and to stop conducting a personal investigation while on-duty." McKilligan never submitted that memo, however, another factor weighed during the disciplinary process.

The department's Office of Professional Accountability conducted a review and cited the trooper for several violations including failing to obey orders, unbecoming conduct and waste of state resources.

The Board of Appeals in May reduced the original six-day punishment to three days after McKilligan appealed. It also awarded him attorneys fees in the matter.

He was honored in 2017 by the Tennessee Highway Safety Office for his work.

The office noted then the trooper "patrols Tennessee roadways with tremendous focus and purpose.

"This individual is passionate about saving lives by keeping the roadways safe from impaired drivers. From October 2016 to July 2017, this individual made 48 DUI arrests."