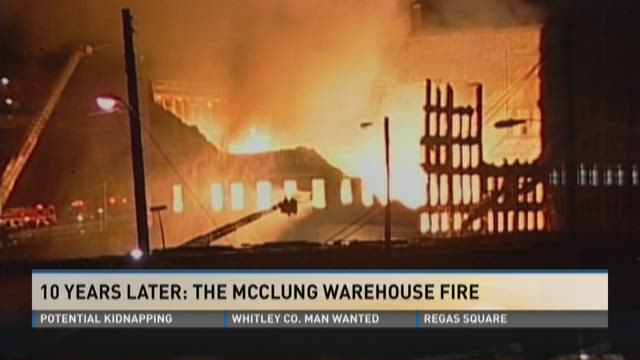 Watch the 10News Nightbeat at 11 p.m. Tuesday for these firefighters' reflections on the McClung Warehouses fire 10 years ago.

Tuesday marks 10 years since Knoxville experienced one of the largest and most expensive fires in the city's history.

The flames started in the historic McClung Warehouses on Jackson Avenue in the early morning hours of Feb. 7, 2007. Strong winds caused the flames to carry the embers miles away.

"It was raining fire because there were so many embers coming from behind me eastwardly, and it wasn't just a mild wind. It was a heavy wind," said Capt. Darrell Whitaker, who served as Knoxville Fire Department's media spokesperson in February 2007. He is now a fire investigator with the department.

"We were fighting fire into the wind," he recalled.

Several firefighters were injured and many more emotionally exhausted from the three-alarm fire.

Whitaker said in addition to the massive flames at McClung, there were a number of small fires on rooftops. During an interview Monday, he reflected back on the days-long process to put out the fire and keep it from reaching the rest of downtown.

"It some ways it feels like just yesterday because it was such a big part of not only my life but the Fire Department's life. But at the same time we've had other things to do, and life goes on," he said.

But what still brings tears to Whitaker's eyes is recalling when he nearly lost three of his fellow firefighters at one point in the struggle to contain the flames.

"We thought the fire was out. We started breaking our equipment down and lo and behold fire was still in that chute," he said.

Three firefighters had gone to the third story of one of the remaining towers. There was no fire in the building when they entered. Whitaker said they later learned that fire was burning in the duct work and eventually reached third floor.

"They were using that as a vantage point to fight this fire with the wind behind their back. We thought the fire was out," Whitaker said.

The entire floor ignited and trapped the firefighters.

Whitaker was in the middle of an interview with local media nearby when he heard hectic voices on the radio. He turned around and ran toward the blaze.

"There was about a 10-minute portion of my life where I thought I lost four of my best friends. I just knew there was no surviving it," he said.

Retired Army Ranger and Knoxville Firefighter Jeff Kindrick was one of  several trapped on the third floor.

"I got to the front of the warehouse and broke a window out. I was going to jump. It was that hot. My mask had melted, a lot of my gear had melted and burnt up. I looked over and saw that fire hose that was the only way out. It was that or jump. Thank goodness it was there," Kindrick said.

He used the fire hose to slide down a portion of the three-story drop. He ended up falling some of it and broke two vertebrae in his back in the process.

He used his Army training to land and believes it saved his life.

The other two trapped firefighters also used the hose to escape and sustained injuries, but survived.

"We went from total devastation to absolute elation. So you can imagine the emotion was really difficult," said Whitaker.

Kindrick said what got him through the following nine months of intense physical therapy was working toward rejoining his brothers and sisters at the Knoxville Fire Department.

He later retired, but decided he missed the department.

He had to retrain and nearly start over, but he has been fighting fires again for more than a year now.

"Knoxville and the Knoxville Fire Department are more of a home to me than anywhere I've been in my 53 years. This is where I belong," he said.

Even though it was one of the most difficult days of their lives, both Whitaker and Kindrick said they look back and feel nothing but pride.

"I was so proud of what all we had done and accomplished and survived," Whitaker said.

The city of Knoxville acquired the properties for $1.45 million in July 2013. In July 2014, homeless people living in the remaining buildings on site started another major fire that eventually forced the city to demolish the remnants.

The city said it has plans to turn the properties over to a developer but first must prepare the site. The city has been awarded an EPA grant to remove pollutants and plans to secure it in the next year. A spokesperson said it will be another three years before any development happens on the property.