10Investigates: 76 deaths on Chapman Highway since 2005

Local and state leaders disagree on how to fix the roadway with a deadly reputation or whether a new roadway needs to be built. 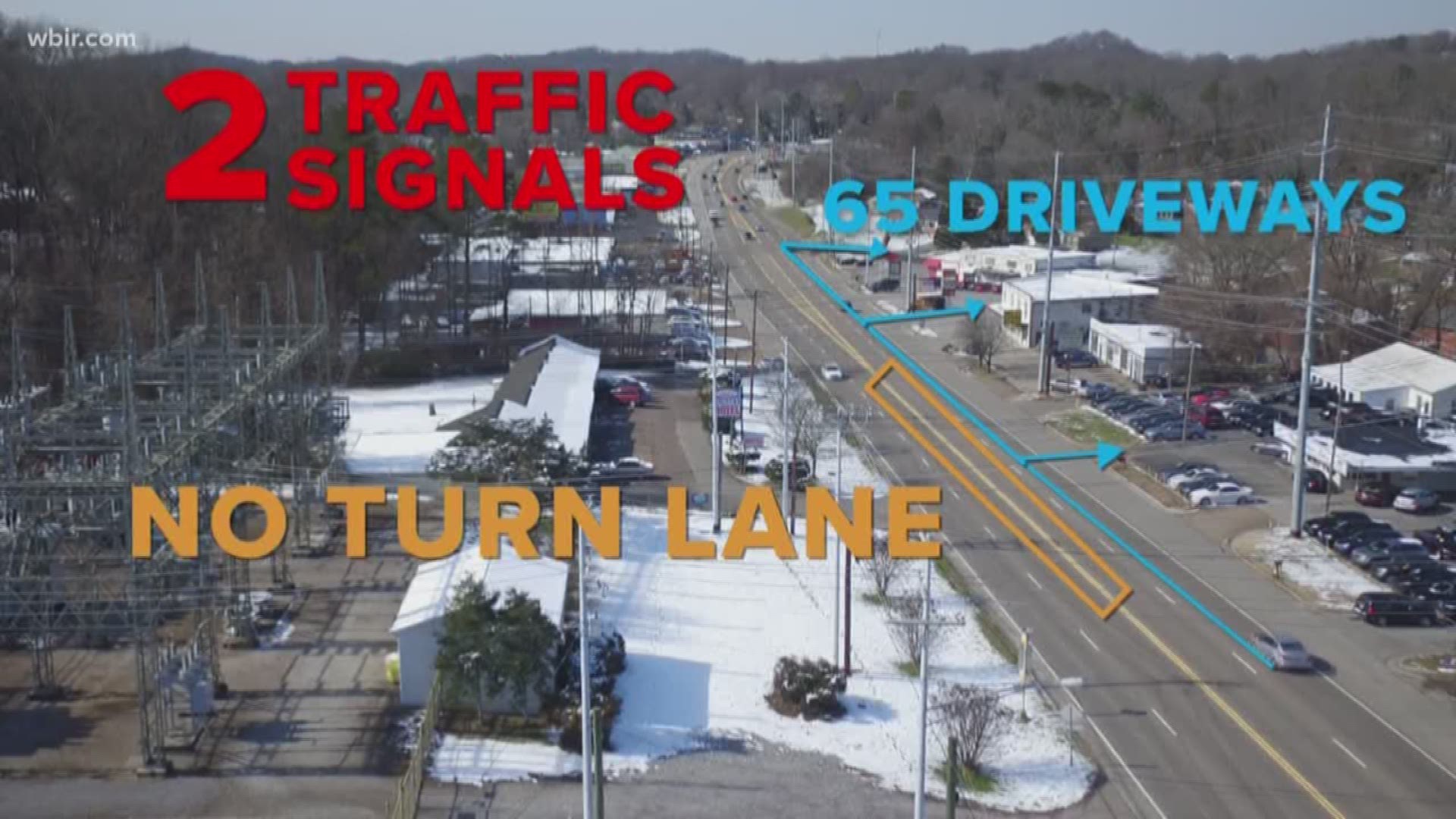 65 fatal crashes have occurred on a roughly 22-mile stretch of Chapman Highway from Knoxville to Sevierville since 2005.

76 people have died in those wrecks, according to the Tennessee Department of Safety and Homeland Security.

The data released to 10News by the Tennessee Highway Patrol shows Chapman Highway has seen significantly more fatalities than other East Tennessee roads with similar reputations.

Alcoa Highway is sometimes referred to by those who drive it as “I’ll Kill Ya Highway.” Thirty-two people have died on a 12-mile stretch of Alcoa since 2005.

On Kingston Pike, 15 people have died in the same time period on a roughly 15-mile stretch of road.

“Chapman Highway has always been a challenging roadway,” said David Rausch, former Knoxville Police Department chief. “It’s not a one single answer to fix it. But something definitely needs to be done. Too many lives are being lost.”

Rausch now works as director of the Tennessee Bureau of Investigation.

In December, 22-year-old Pierce Corcoran was killed in a head-on crash on Chapman Highway in Knoxville. His death has reignited a debate about safety on the roadway that has been ongoing for decades but has never been resolved.

“It’s got to be looked into. I mean, it’s been talked about for years,” said Wendy Corcoran, Pierce’s mother.

Following Corcoran’s death on Chapman Highway, we took our questions to the people charged with making the road safe. After years of talking about how to improve safety, have the changes made any difference?

We found that when it comes to making Chapman Highway safer, there is no clear answer on how to do it. 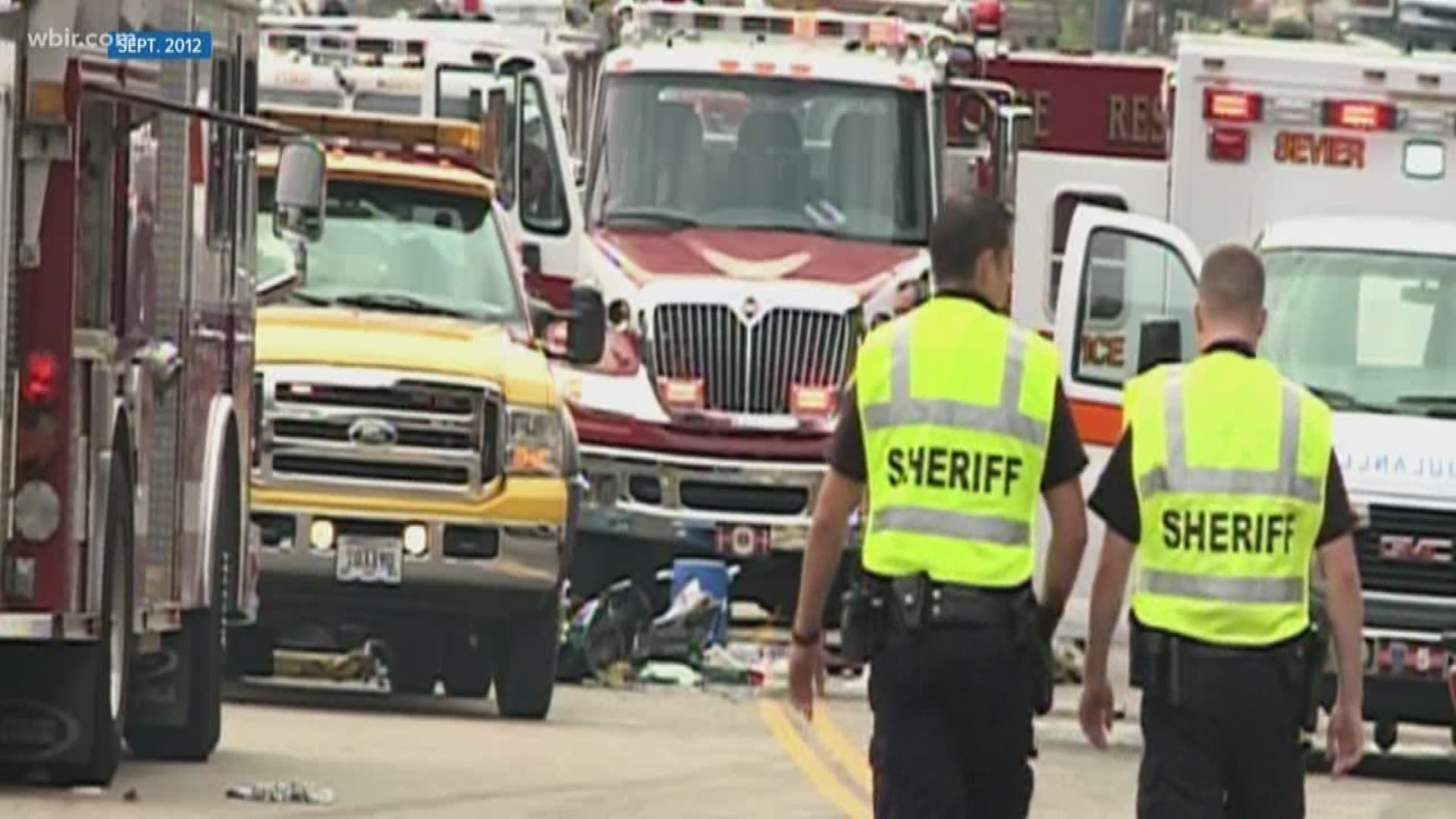 TDOT says the millions of dollars spent on improvements over the years still are not enough. They say not even a $45 million project planned for 2023 will be sufficient to ensure the road is safe for years to come.

Engineers with the city of Knoxville disagree with TDOT’s assessment.

“From the studies that we’ve done, it’s not particularly unsafe compared to other roads,” said James Hagerman, the director of engineering for the city of Knoxville. “I don’t think another roadway is needed.”

More than 30,000 cars travel Chapman Highway every day. The majority of them weave through South Knoxville.

We wanted to speak with Knoxville Mayor Madeline Rogero about what actions she believes need to be taken, but a spokesperson for the mayor said she did not have time.

They referred us to the city’s engineering department.

“Every piece of road everywhere has opportunities to improve safety,” said Hagerman. “There are a couple of intersections that have a higher crash rate than state averages, but in general it is not as bad as the perception.”

In 2014, Rogero’s opposition led to TDOT scrapping a plan they believed would help improve safety on the roadway. Rogero, a South Knoxville resident, argued that a proposed extension of James White Parkway through South Knoxville would endanger the Urban Wilderness she had worked to establish.

“We are opposed to this project,” Rogero said in 2014 to a crowd of constituents at a meeting debating the extension project. “We are not a bridge to nowhere anymore. We are now a bridge to an urban recreation destination.”

TDOT said the plan would help take cars off an already overcrowded Chapman Highway. In 2014, then TDOT commissioner John Schroer sent a letter to Mayor Rogero outlining the safety deficiencies of the road, writing in part, “the only true solution identified by our traffic engineers was the construction of an alternate route.”

Since 2014 when that letter was sent, 25 people have died on Chapman Highway.

“A road can be built and it can be accommodating to the wilderness project that the city of Knoxville has,” said Mayor Waters. “The two to me were never mutually exclusive.”

While Mayor Rogero would not speak with us about Chapman Highway, we have learned she met with the Corcoran family following the December crash. Her office says they are considering lowering the speed limit in certain parts of the road, but say those discussions began before Corcoran’s death.

Only a double yellow line separated oncoming traffic at the spot where Corcoran died in the head-on crash.

Just south of the site of the crash sits one of the most dangerous parts of the roadway. In the .87 miles from Lakeview Drive to Chapman Ford Crossing, there are 65 driveways and two traffic signals. There is also no turn lane.

In the past three years, there were 113 crashes there, according to numbers released by the Knoxville Regional Transportation Planning Organization (TPO).

But that’s not the spot with the most crashes.

In the less than two miles between Blount Avenue and Overbrook Drive, Knoxville Regional TPO numbers show there have been 424 crashes in the same time period. That’s 236 crashes per mile, well above the state average for roads of the same structure.

“I don’t think they’re realizing the impact of what everybody has lost on Chapman Highway,” said Nancy Kaliszewski, who lost her daughter Courteney in a crash in 2012 on the Sevier County part of Chapman Highway. “Something drastic has to be done. I don’t want to go to another funeral of another child killed on Chapman Highway.”

Courteney Kaliszewski was killed in 2012 in a wreck when a car crashed into the church van she was in. Two people died on that September Sunday nearly seven years ago. Authorities say the driver, Tyler Schaeffer, was impaired.

The spot of road in Sevier County now has a center turn lane, but at the time of the accident, 10News archive video shows only a double yellow line separated oncoming traffic.

Thirty-five more people have died in wrecks on Chapman Highway in the years since the crash that killed Courtney.

Firefighters from the Seymour Volunteer Fire Department were some of the first on scene as they worked to save Courteney.

Chief John Linsenbigler took us on a drive along the roadway, pointing out the hazards. Makeshift memorials dot the highway every couple of miles, honoring those who have lost their lives.

“You count the crosses, there’s one right there on the side of the road. That’s been there for a long time. I worked that accident,” said Linsenbigler. “There’s drop offs, there’s blind curves, so you need to be attentive while driving.”

The problem is not new for residents of communities along Chapman Highway.

In 1994, people marched along the road to protest the dangers.

“I’m not the only one who has lost a family member to this road,” said one protester at the time. “But we want it to be the last.”

The Knoxville Police Department would not speak with us about safety on Chapman Highway, but former KPD Chief David Rausch would.

Rausch says KPD sometimes increased patrols on Chapman while he was chief in an effort to impact safety. He says the only permanent solution are engineering fixes, which don’t come cheap.

TDOT has several projects underway that they believe will help improve safety on the road.

A $45 million dollar project planned for 2023 entails “intersection improvements and; or driveway improvements and; or left turn lanes at various locations throughout the project area,” according to Nagi. “This is for a 10.3 mile stretch from near Blount Avenue to near Boyds Creek Hwy in Seymour, and carries into Knox, Blount and Sevier counties.”

However, they say not even the $45 million project planned for 2023 will be enough to make Chapman as safe as it can be with the amount of cars that travel the road every day.

“The way to make Chapman Highway safer is to get vehicles off of that roadway,” Nagi wrote in an email to 10News. “Without that happening we remain concerned that any improvements we are making/will make will not be sufficient in the years to come.”

The city of Knoxville is working with TDOT on the projects that fall within city limits.

“Two sections (Evans Road to Burnett Lane, South of Simpson Road to Hendron Chapel Road) are not yet under construction,” Nagi wrote. “One section (Macon Lane to SR 338/Boyds Creek Highway) is currently under construction. Those three sections will widen the roadway from four lanes to five lanes with a center turn lane in those areas.”

The Knoxville Transportation Planning Organization is also in the middle of a study on Chapman Highway, focusing in part on safety.

It is "not another plan for the Chapman Highway corridor. This effort will evaluate previous studies, confirm their recommendations, identify new issues, and develop a strategy for road improvements," the organization writes.

The TPO says they prioritize safety when determining which projects to take on and where to allocate money.

“Safety is always the highest factor that we look at in prioritizing projects,” said Mike Conger with the Knoxville Regional TPO. “There’s safety issues with every roadway. Ultimately the motorists out there, you have to be cognizant of their actions.”

Conger blames some of the issues of the roadway on areas with only a double yellow line separating oncoming traffic.

“There are issues mainly dealing with those sections without a turn lane. Those can create additional safety concerns above and beyond a roadway that does have that type of infrastructure,” said Conger.

He also agrees with Hagerman and the city of Knoxville that another road is not needed to bypass Chapman Highway.

10News attempted to put together a list of people who have died on Chapman Highway in Knox and Sevier counties over the past several decades.

Below are just some of their names.