It is the 25th anniversary of a tornado that ripped through Loudon County, killing one person and destroyed several buildings. 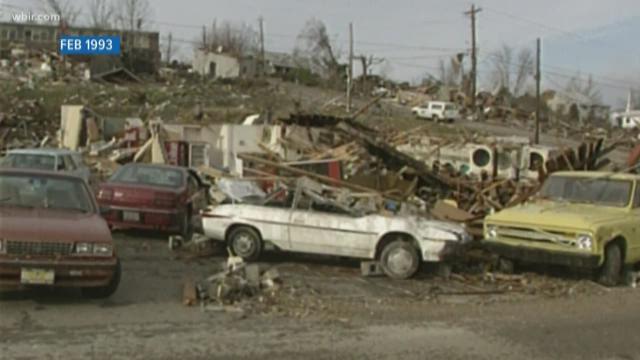 25 years ago on a sunny and warm day, devastation hit Lenoir City.

A tornado ripped through the city's main road, killing one person.

It was Josh Marler's earliest memory--the tornado sent him and his family down the street to take shelter at a church.

He's thankful the damage wasn't worse than it was.

"I got carried out on my mom's shoulders, out from our trailer," Marler said.

The 4-year-old Marler had a hard time taking in the situation.

"And I remember being on her shoulders, and looking back toward that dumpster right there, and seeing the funnel," he recalled.

It was a funnel of destruction.

The tornado touched down on February 21, 1993. In addition to the one fatality, it destroyed several businesses.

"If you see the vacant lot on that corner, that's where the one person died," Marler said.

"So this laundromat, there was nothing left of it," Marler said. "You could see maybe a few cinderblocks, the dryers, the washers."

Lenoir City Mayor Tony Aikens was chief deputy of the sheriff's office at the time.

"Heard it on the radio that a tornado had came through the intersection of 321 and 11," Aikens said, referencing the main roads in Lenoir City.

"(It was) total devastation all over the city," Aikens said. "(I) immediately tried to get on the radio, on the cell phones to call for some help from surrounding counties and was finally fortunate to be able to reach those counties."

Aikens is proud of his city for bouncing back and rebuilding quickly.

"The people of Lenoir City are so understanding," Aikens said. "They came together, just like they do now, and we're so blessed to live in a community such as Lenoir City."

For Marler, walking the roads of his neighborhood will always bring back the memory.

"I didn't really have nightmares about tornadoes after that, but it was still scary," he said.

Aikens said the city council at the time relaxed some building codes and restrictions afterward to make clean up easier for the city.