Mother thanks life-saving rangers with 45 years of poinsettias

Every December since 1974, Wanneta Johnson has sent a poinsettia to thank rangers in the Great Smoky Mountains National Park for saving her son's life. 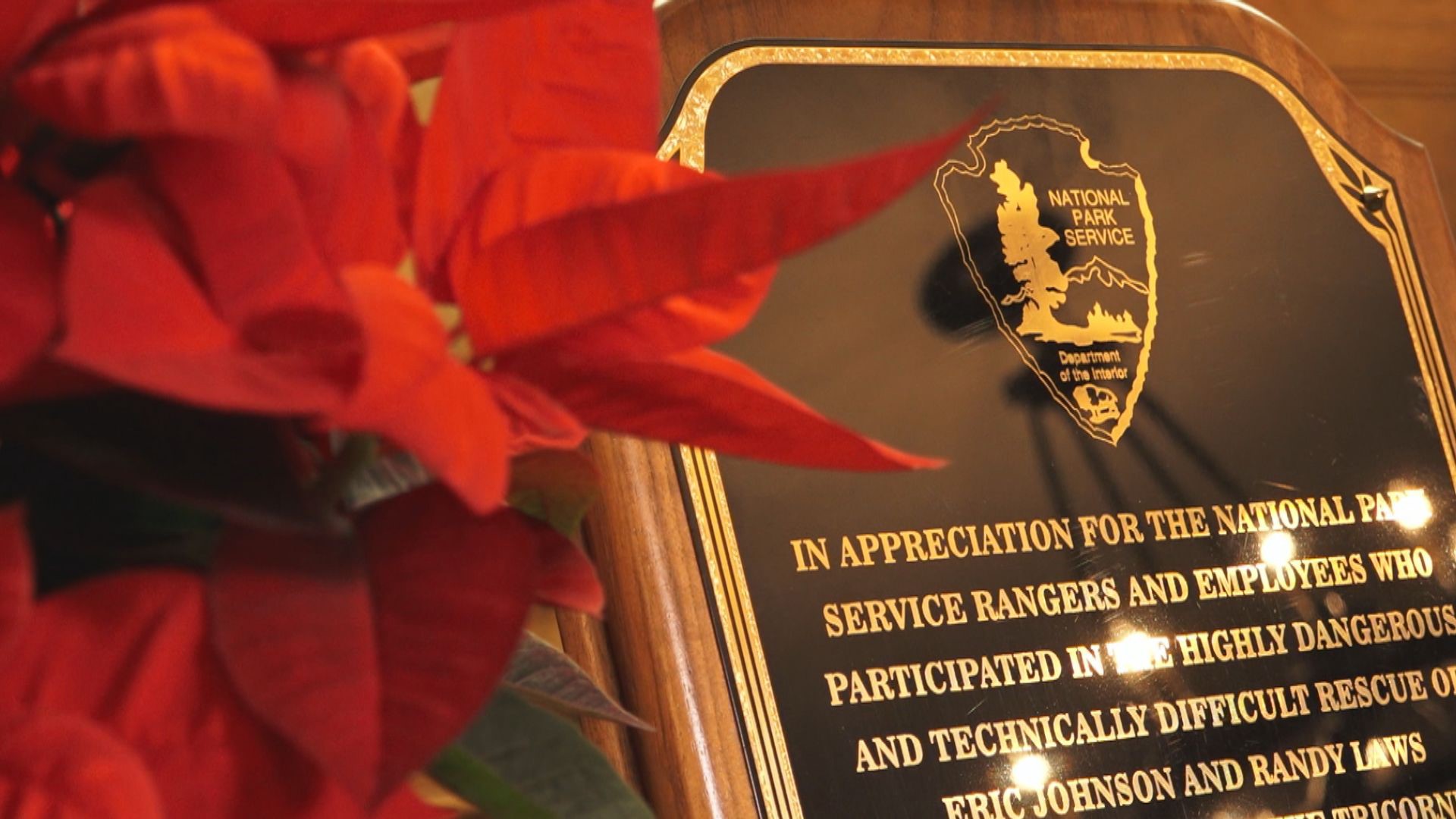 GATLINBURG, Tenn. — At Great Smoky Mountains National Park (GSMNP) headquarters, employees may differ on how they pronounce poinsettia.  But they all agree the large red flower in the lobby each December exemplifies a mother's perennial gratitude for the life-saving work of park rangers.

"The first week of December, every year we look forward to this beautiful poinsettia from Wanneta Johnson. This is 45 years in a row she has sent this to thank our rangers," said GSMNP spokesperson Dana Soehn.  "We display this in our park headquarters [lobby] for everyone to enjoy and reflect on the efforts people make."

This year was only the second time Johnson did not drive from her home in the Tri-Cities to deliver the decorative plant in-person.  Her mobility is limited now that she is 98 years old.

"I'm old but I still have all of my marbles," laughed Johnson. "I still made sure they got the poinsettia. How could I not?  What would my life have been without those rangers?"

Rangers earned Johnson's eternal gratitude in 1974. Just after Thanksgiving, Johnson dropped off her 15-year-old son and one of his fellow Boy Scouts for a multi-day hike on the Appalachian Trail.  The two teenagers, Eric Johnson and Randy Laws, planned to hike 31 miles from Waterville to Newfound Gap.

"They were both in the scouts and had a plan. It was a sight to see them hiking away. And it just looked like everything was going to be lovely.  We'd come back in a couple of days and pick them up and just bring them home. Well, it wasn't that way at all," said Johnson.

"It kind of makes me shiver to think about that day. The agony of not knowing if they were freezing to death was just terrible," said Johnson.

Rangers dredged through the trails in search of the boys, but the snow kept piling up.

"The snow was so deep, it was getting up to their chests," said Johnson. "Those rangers were dauntless. I can tell bravery when I see it. All those forest rangers were heroic to me."

Credit: WBIR
1974 photo of Eric Johnson and Randy Laws at a Knoxville hospital after being rescued from a blizzard in the Great Smoky Mountains.

After four days, the storm cleared enough for helicopters to search from above.  A pilot spotted the bright color of hope at the Tri-Corner Knob shelter on the Appalachian Trail.

"Eric and Randy had put their red backpacks outside on top of the snow so it would help them [rescuers] know they were there. But it was still so turbulent up there the helicopter could not safely try to get them out. They called in one of those big Chinook helicopters from Fort Campbell with two blades on each end to lift the boys out."

The boys were hungry and frostbitten when they were rescued and taken to the hospital in Knoxville.  After four days in a blizzard, they were finally safe and reunited with their families.

Credit: WBIR
The poinsettia sent by Wanneta Johnson to rangers sits in GSMNP headquarters beside a plaque the family presented rescue workers in 2009.

Wanneta's son not only survived. He went on to climb mountains around the world, work for the U.S. Department of Justice, and is now a recently-retired attorney.

For 45 consecutive years, the Johnsons have made their gratitude known by asking the florist for the largest poinsettia they can buy.

Credit: WBIR
Wanneta Johnson, 98, has sent a poinsettia to park rangers in the Smokies every year since 1974 when they saved her son's life.

"This is incredibly special to have someone who comes back year after year to express that kind of gratitude," said Soehn.

Johnson said she wants the gesture to show appreciation for past, present and future rangers.

"Reminding people what a wonderful outfit the rangers are is important. Their work means something," said Johnson.

Johnson said her relatives have promised to continue the tradition of sending a poinsettia to the national park after she dies.

RELATED: Aug. 2019 - Don't go on your next Smokies trip without trying these hiking hacks