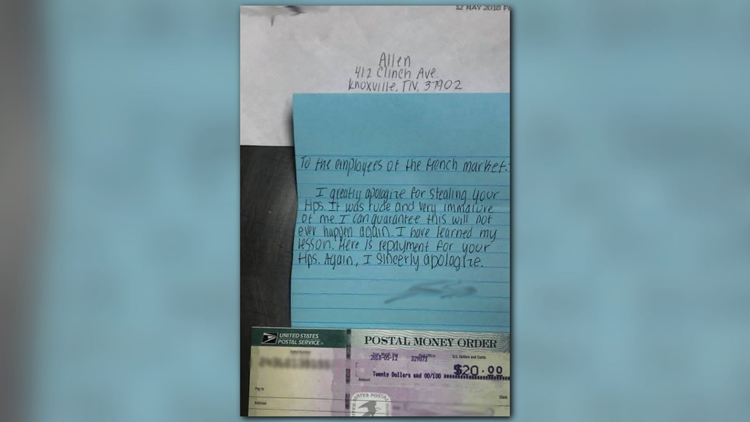 A Knoxville restaurant owner said a would-be thief is learning that honesty is truly the best policy after he owned up to stealing tips from them.

Allen Tate from The French Market Crêperie in downtown Knoxville said he has forgiven the unnamed man and won't be filing charges after he admitted to his mistake and worked to make things right.

According to Tate, the man called them Saturday to let them know he had been contacted by some friends who saw his photo on their Facebook feeds with a post about tips being stolen.

The Knoxville Police Department opened an investigation into the incident, but as it turns out the man had a change of heart and wanted to make things right before they needed to take action.

The man told the restaurant he was very remorseful and embarrassed by his actions during the phone call and wanted to make things right, so they asked him to send them back the money he had stolen.

On Wednesday, Tate said he did just that by mailing them a money order for $20 and an apology letter:

"To the employees of the French Market:

I greatly apologize for stealing your tips. It was rude and very immature of me. I can guarantee this will not ever happen again. I have learned my lesson. Here is repayment for your tips. Again, I sincerely apologize."

The French Market said it's case closed now that the matter is settled, and the Knoxville Police Department said it's a bit of a rarity for this kind of thing to happen.