A new center specializing in preventing Alzheimer's disease will open in September in Knoxville. 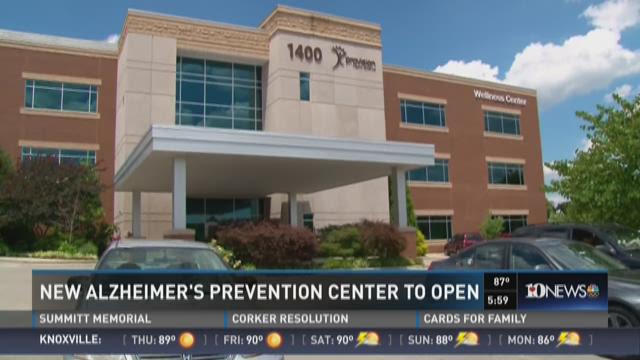 A new center specializing in preventing Alzheimer's disease will open in September in Knoxville.

Andrew Dougherty and Mike Mursten founded the Genesis Brain Health Institute, which will be located at the Provision campus on Middlebrook Pike, to help delay onset of cognitive decline.

"We're not looking to see patients," Dougherty said. "We want the baby boomers, the people who want to take an active, a strong approach and really empower themselves to take charge of their brain health."

“She was just so strong and so impactful," he said. "Hopefully, we can use this through the Pat Summitt Foundation, awareness, donations so we can find a cure so we can make her the legacy she left us."

The prevention mission is also personal for Dougherty, who lost his grandmother to the disease.

"Some of my earliest memories were of her," he said. "She was in a nursing home at that time, but at the time she was only speaking French. Alzheimer's disease affects everyone differently, and just to see how it affected the brain, where she took French in high school. She wasn't fluent in it."

His dad, Dr. John Dougherty is the Medical Director of the Cole Neuroscience Center at the University of Tennessee Medical Center. He inspired Andrew as a teen to learn as much as he could about Alzheimer's.

“I started volunteering with Alzheimer’s Tennessee," he said. "By 19, I say that I was dissecting brains looking for the amyloid plaques.”

He said his dad has seen more than 35,000 patients, most of them for Alzheimer's, during his career. Andrew wanted to move his focus from treatment to prevention by improving brain health.

“If we can delay onset just two to three years, because Alzheimer’s is such a late life disease, we can save this community millions of dollars just because the cost of care for Alzheimer’s in the United States alone is over $2 billion," he said.

Mursten is most excited about technology that will sync with the existing Apple health app to collect data about clients' lifestyle and monitor them over an extended amount of time.

“All of the data captured within the Apple health kit will be uploaded to our system," he said. "Then, even after people are finished with our program, we’re going to keep track of them and continue to give them feedback.”

The 12-week programs will cost anywhere from $2,500 to $5,000, and it's not a service covered by insurance. The center will also limit client capacity to 25 per session to more closely monitor each person's progress.

“We have to take an active approach," Dougherty said. "Our baby boomers are 55 to 75. We want those people to come in and take lifestyle changes, and treat them just like they do heart disease or diabetes.”