Appalachian Unsolved: How a father of 7's killing spurred creation of the TBI

J.T. Lutz was at home with his family when someone fired a shotgun blast that killed him. Seventy years later the case remains unsolved. But his slaying inspired creation of the statewide crime-fighting agency. 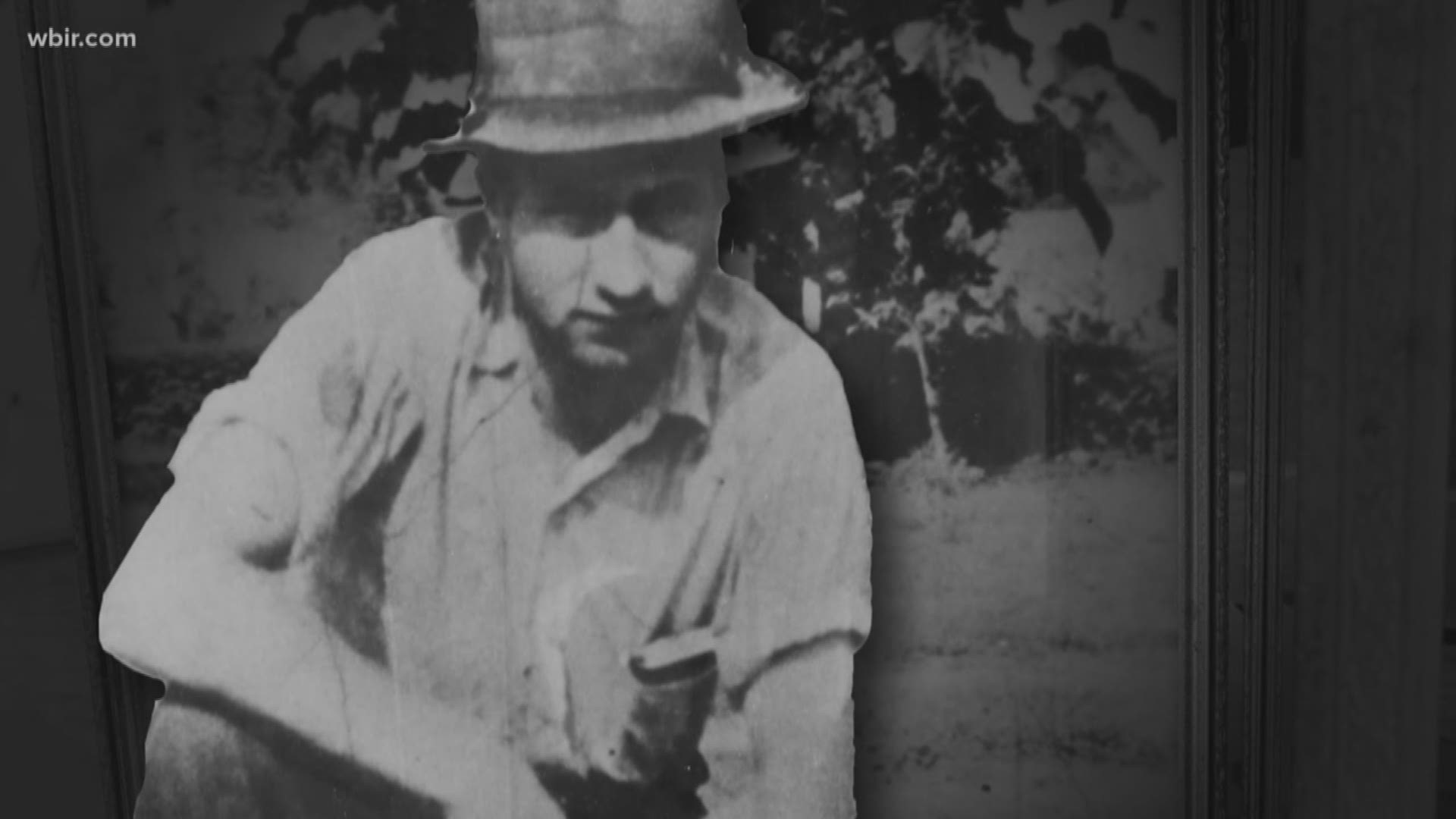 GREENEVILLE, Tennessee — It's been nearly 70 years and the Lutz family still doesn't know who murdered their father.

On a rainy night in December 1949, someone with a shotgun stood outside the two-room Lutz house off a country lane in west Greene County, fired into a window and killed J.T. Lutz, a 28-year-old sawmill operator and father of six with another on the way.

J.T. had given the prosecution evidence in a theft case. He'd been warned to keep his mouth shut, but he wasn't that kind of man.

Credit: Greeneville Sun
J.T. Lutz of Greene County was shot to death in December 1949 in a homicide case that remains open.

While the killing remains unsolved, something historic emerged from that night: the creation of what would become the Tennessee Bureau of Investigation.

Jones had been at the Lutz crime scene that night in the Gap Creek community. He'd seen officers coming and going outside the humble house, trampling on potential evidence that might have helped catch J.T.'s killer.

Linked forever by the homicide, Jones' family is proud they were able to provide some kind of justice -- if not for J.T., then at least for other crime victims.

"We always actually just unconsciously grew up feeling a sympathetic bond with the Lutz family, feeling their sacrifice had been so terrible but led to something positive for the state," said John Jones Jr., retired Greeneville Sun editor and the son of Jones Sr.

While their father's death still pains them, the surviving Lutz children say they're proud and grateful today that something good came of it.

J.T. Lutz, his wife, Hazel, and their six young children were spending a quiet night at home the night of Dec. 6, 1949. They'd been listening to the radio.

The children were school age or younger; Hazel was pregnant with a baby boy due in February.

A gun blast shattered the west window, pellets hitting J.T. in the head. Pellets struck Hazel in the hand and upper arm and slammed into a wall.

Tommy Lutz, then age 7, recalled he was on a bed immediately below the window with older brother Orville. He heard his mother scream.

It's a night he prefers to forget.

Credit: Greeneville Sun
The killer fired through the window as shown by the arrow.

The children sat stunned, not knowing what to do. Mrs. Lutz was taken to Takoma Regional Hospital for treatment but returned to the house a couple hours later.

J.T., who'd been in the Army during World War II, lay dead. The killer slipped away in the dark.

"They come and picked Dad up in a cab," Tommy Lutz recalled.

When he learned about the shooting that night, John Jones Sr. called a Greeneville Sun photographer and made the 10-mile trek out to the Lutz home.

A World War II Army veteran, Jones had decided after the war to get involved in his wife's family's newspaper business. The Sweetwater, Tenn., native didn't have a background in journalism, but he soon embraced every aspect of it, his son said.

Jones didn't like what he saw at the crime scene. Authorities on site were wrecking any chance of preserving the evidence, Jones Jr. recalled.

Credit: Greeneville Sun
Jones worked in all areas of the newspaper business but particularly enjoyed the advertising side, his family side.

"Dad said later that the sheriff arrived and they had sharp words about that problem and some of his employees, his deputies, that they had unwittingly done stuff to prejudice a successful prosecution in this case," Jones Jr. recalled. "That bothered him a lot."

After filing his story for the next day's paper, Jones decided to act.

FATHER OF THE TBI

Jones had already seen instances in the community in which perpetrators got away with serious crimes in Greene County. Granted, the county had limited resources to spend on law enforcement, and back then cities and counties were mostly on their own.

Using his position with the paper, Jones Sr. went to the Tennessee Press Association, a professional group still in existence that featured scores of newspapers across the state. Some months after Lutz's killing, he raised the issue with publishers and owners gathered at one of the TPA's semi-annual meetings.

"He urged the state Press Association to take it on as a cause and get behind it," Jones Jr. said.

In the 1940s, 1950s and 1960s, newspapers still wielded the most influence in the media. The TPA formed a committee and made Jones the chair in early 1951. They approached Tennessee Gov. Gordon Browning for support.

The governor quickly agreed to back legislation to form a statewide police agency. In 1951, he signed legislation that created the Tennessee Bureau of Criminal Identification.

It fell under the purview of the state Department of Public Safety. A handful of agents were hired to do the work. It became the "plainclothes" division of Public Safety, according to the TBI.

To Jones Sr. it wasn't enough. The bureau still could fall prey to politics. Jones believed it should be independent, free from any political influence.

He pressed on, using his influence as the eventual Sun publisher and with the TPA's support. Finally in 1980, Jones achieved what he'd long sought: A full and autonomous statewide law enforcement agency.

In March 1980, according to the TBI, following legislative hearings, the organization became independent under the new name the Tennessee Bureau of Investigation.

Jones, who died in July 2016 at the age of 101, was pleased at the achievement. He's widely regarded as the "father" of the TBI, and years later he told his son he considered the agency's creation his proudest moment.

The family -- several Lutz children survive today -- always has remembered the Joneses and what they did for them. In the days after their dad was killed, the paper offered reward money and sponsored a drive to raise funds so the Lutzes could have a decent Christmas.

More than $500 was raised that Christmas --- a lot of money back in the late 1940s. Each child got at least one special gift along with a wagon.

There was money left over to help Hazel Lutz with expenses. After the shooting, the Lutzes moved in with relatives.

No one ever claimed the reward.

Along with J.T. and Hazel, some of the Lutzes are buried in a family cemetery not far from the old Gap Creek home site. The little house is long gone.

Tommy Lutz tends the cemetery to this day.

"They are an impressive family, a good family, and this should not have happened to them," Jones Jr. said.

In the early 2000s, the TBI moved into new headquarters in Nashville. It's still there.

TBI Director Larry Wallace invited members of the Lutz family to come to the dedication. The gesture moved them.

Stella Louise Lutz Blazer, who was only 10 months old when her father was slain, chokes up when she recalls getting the invitation.

Hazel Lutz had died in 1981, having never remarried. But J.T.'s children traveled to Nashville for the big day. TBI personnel presented them with pins and a plaque.

"I thought it was important that these individuals had an opportunity to come down and be recognized, frankly," Wallace said. "It was a wonderful day."

The Lutzes speak fondly of Wallace to this day.

On the TBI's Web page, the agency recalls its history and its roots -- the "heinous crime" that took J.T. Lutz's life.

Wallace remembers first hearing about the murder case in the early 1970s when he was a young agent with the old Tennessee Bureau of Criminal Identification.

In 2003, just as his term as director was ending, Wallace went up to Greene County to check on a new tip that the murder weapon might be down in the well at a home site.

Agents investigated but found no shotgun, he said. He'd hoped he could help bring closure to the family.

To Wallace, that's the kind of thing the TBI was meant to do

"It was a poor, modest, rural family, and they needed help," Wallace said, recalling how their father's killing impacted them. "I view that as a symbol of the entire agency and what we were created for."

Credit: Greeneville Sun
Hazel Lutz and her young family pose for a photo in the room where J.T. was killed.