The man said he did it in self-defense. Neighbors familiar with the bear said they are taking a wait-and-see approach as to whether the animal was aggressive. 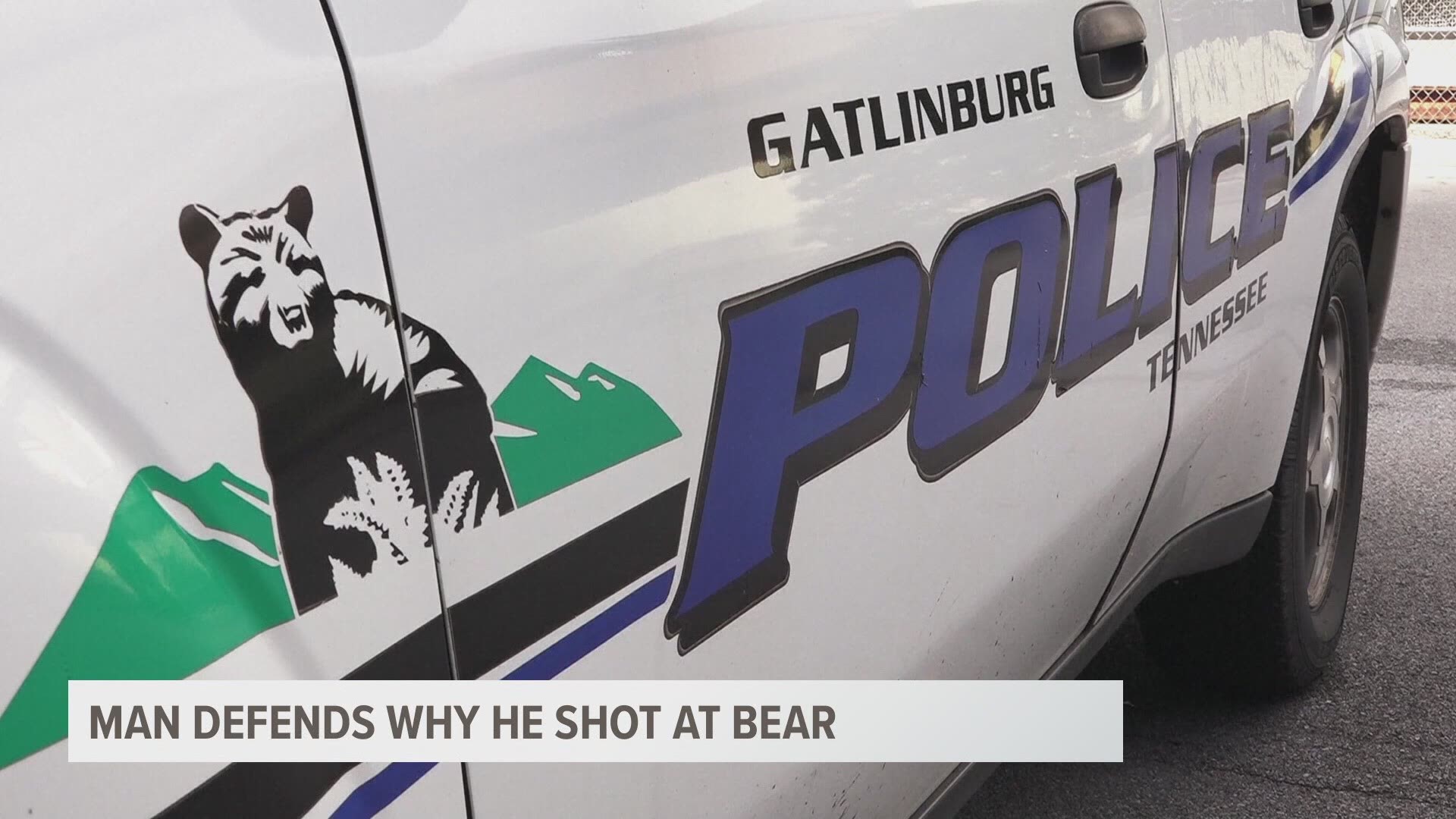 GATLINBURG, Tenn. — A tourist in Gatlinburg faces a couple of criminal charges after firing his gun six times at a bear outside the door of his motel room Thursday night.

Gregory Sapp, 53, of Hixson, Tenn. was cited for illegal discharge of a firearm and reckless endangerment.

Gatlinburg police said Sapp claimed the bear was outside his room on the second floor breezeway of the Motel 6 and charged at him.  The shooting happened 11:30 p.m. Thursday.

Sapp was not injured. On Monday, he said he shot the bear in self-defense and did not miss his mark.

"I didn't miss. I heard the bullet 'toomp, toomp.' And there was a blood trail. Pretty nasty one too," he said. "There was only one way to react, sir. And that was either that bear or me. I had no time to even move."

Officers with the Tennessee Wildlife Resources Agency (TWRA) were unable to find the bear Friday. As of Monday, they still do not know how many shots hit the animal or if it is still alive.

Neighbors said they are very familiar with the animal and expressed skepticism that it was aggressive.

"I heard several shots ring out. It turns out this fellow was shooting at a black bear that he claimed tried to attack him and his wife.  He exclaimed it was a 300 or 400 pound bear, which is the exact size of that bear that has been in our neighborhood for a while.  It is a big bear. But like I said, I've never had a problem with that bear.  It goes about its business," said neighbor Anthony Gunter.

"He was a really friendly bear.  He would just walk over here, leave us alone, and go over there. I hope he's alive," said neighbor Brooklyn Lanham.

Police said they are still investigating the case. Sapp said he is standing by his actions, but said he wishes he didn't have to harm the bear.

The Motel 6 has several cameras visible on the exterior of the building and at the breezeways.

Neighbors said they'll take a wait-and-see approach on whether the animal was aggressive toward the motel guest, but admit animals roam the breezeways of motels.

"Those bears will go up and down the ramps of these hotels searching for food. You know, whatever they can find," said Gunter.

TWRA said if the bear was truly aggressive and threatening, the man may be justified for shooting it in self-defense.  But you are not allowed to shoot a bear because it is close to you.  Firing a weapon should only be used as a last resort when there is no other escape option.

"The bear ran off and was not located," said TWRA spokesperson Matt Cameron. "If his statement is true about the bear acting aggressively, TWRA would not likely place any additional charges."

Cameron said National Park Service helped TWRA look for the bear 2 to 3 hours Friday but they lost the trail of blood.

TWRA said if it the animal is found dead, it will be sent to the University of Tennessee for examination and necropsy.

Neighbors were upset by the shooting and said there is a bigger issue with tourists reacting inappropriately when they encounter wildlife.

"These animals, we're in their territory.  It [the bear] probably scared him and maybe it was attacking, I don't know.  What I do know is when you take care of your trash, don't have dumpsters or food to attract them, and leave them be, they leave you be," said Gunter.