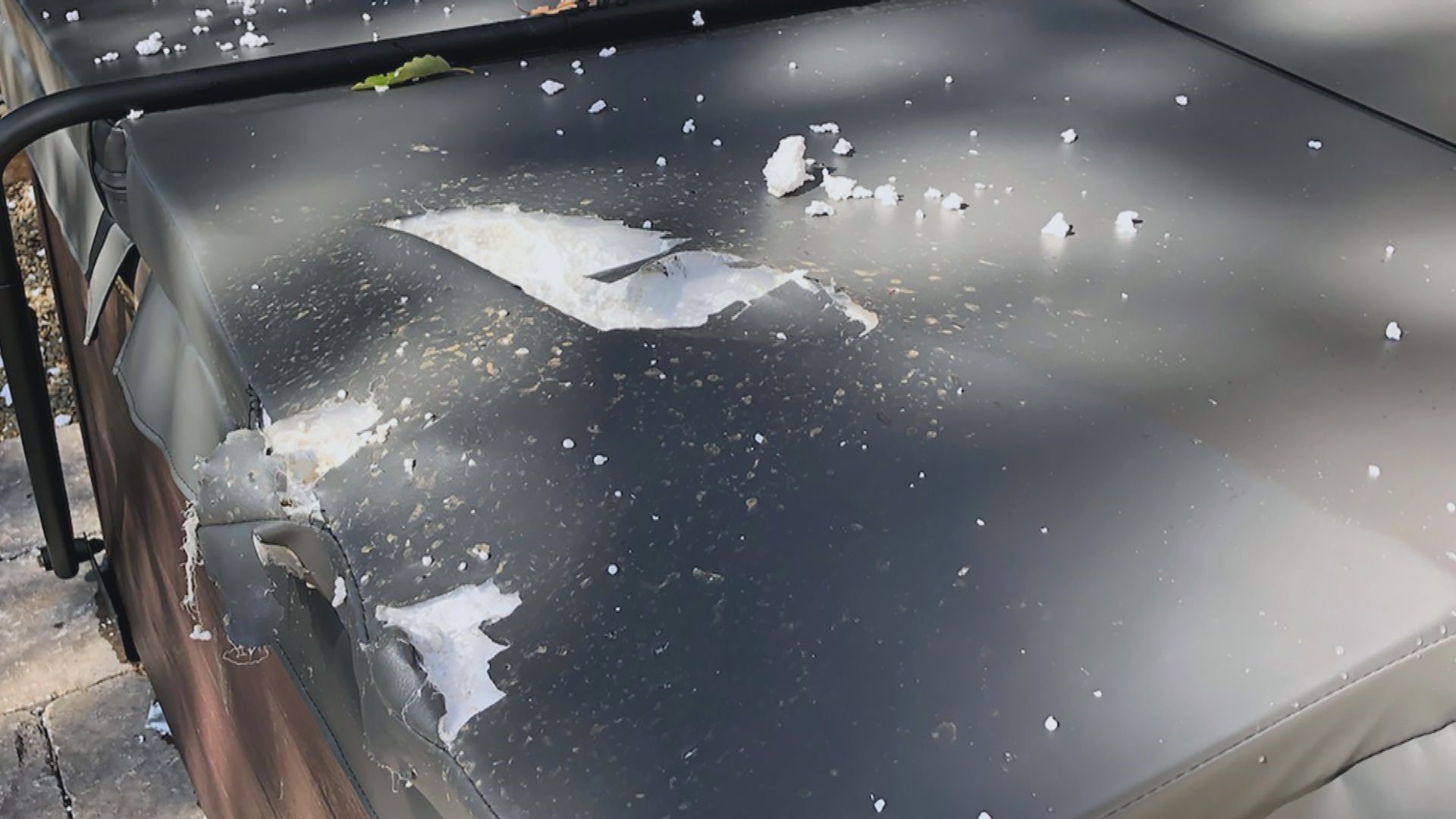 GATLINBURG, Tenn. — Bears in the mountains of East Tennessee are busy fattening up on a feast of acorns before the cold winter months arrive.  That doesn't mean they won't make time to chew on a hot tub cover or three.

Pam Hill with Stony Brook Cabins plasters the company's rental property with signs and instructions to ensure guests know they are in bear country. There are instructions posted for proper disposal of trash to prevent attracting the animals.

She did not expect the cover on a hot tub to become a main attraction.

"The bears love the hot tub covers. At this one cabin, we've replaced the cover three times. They've also gotten the cover at our cabin next door. The vinyl covers are just really tempting, evidently. We came up Tuesday and there was a giant hole in the hot tub cover where she had just destroyed it. The Styrofoam is still around on the ground everywhere and we're trying to clean it all up," said Hill.

Credit: WBIR
Duct tape covers holes in a hot tub cover destroyed by bears while the rental company awaits the delivery of an ordered replacement.

Hill said the bears will chew the covers and rip out the foam. A mother and her cubs are the main culprits that recently pop the tops of tubs.

"They're just after the hot tub cover. They come when nobody's here and just play. It's just a big toy to them," said Hill.

Hill is not dealing with an isolated party animal that's somehow lost its bearings for food.  Many hot tub covers throughout Gatlinburg have fallen prey to bears.

Credit: WBIR
A freeze-frame taken from a video by Tim Brumlow of a bear attempting to steal a hot tub cover in Gatlinburg.

Tim Brumlow of Huntsville, Alabama, shared a video with WBIR of a bear trying to steal the cover from a hot tub over the edge of a balcony before the animal was scared away.

For Hill, the cost of replacing covers has become an unbearable expense.

"They're about $300 dollars each. We're looking now at buying an aluminum one. They're very expensive. They're more like $1,500. But hopefully the bear won't be as enticed by the aluminum cover as she is by the vinyl cover. It's not good for her to eat the covers, I'm sure," said Hill.

Hill is hopeful the metal cover will break the bears from foaming at the mouth.

Credit: WBIR
Chunks of Styrofoam are found in the woods near a Gatlinburg rental cabin where bears have destroyed multiple hot tub covers.

"We love the bears and the guests love the bears.  We've got to find a solution, and we don't know what the end of the story is yet," said Hill.

Another item bears enjoy chewing and scratching is utility poles treated with creosote. Utility crews with Appalachian Power in Virginia have repeatedly had to replace poles that were chewed down to a few inches in diameter by bears.

Credit: WBIR
While a rental company awaits the delivery of a replacement, duct tape covers the large holes on a hot tub cover chewed by bears in Gatlinburg.