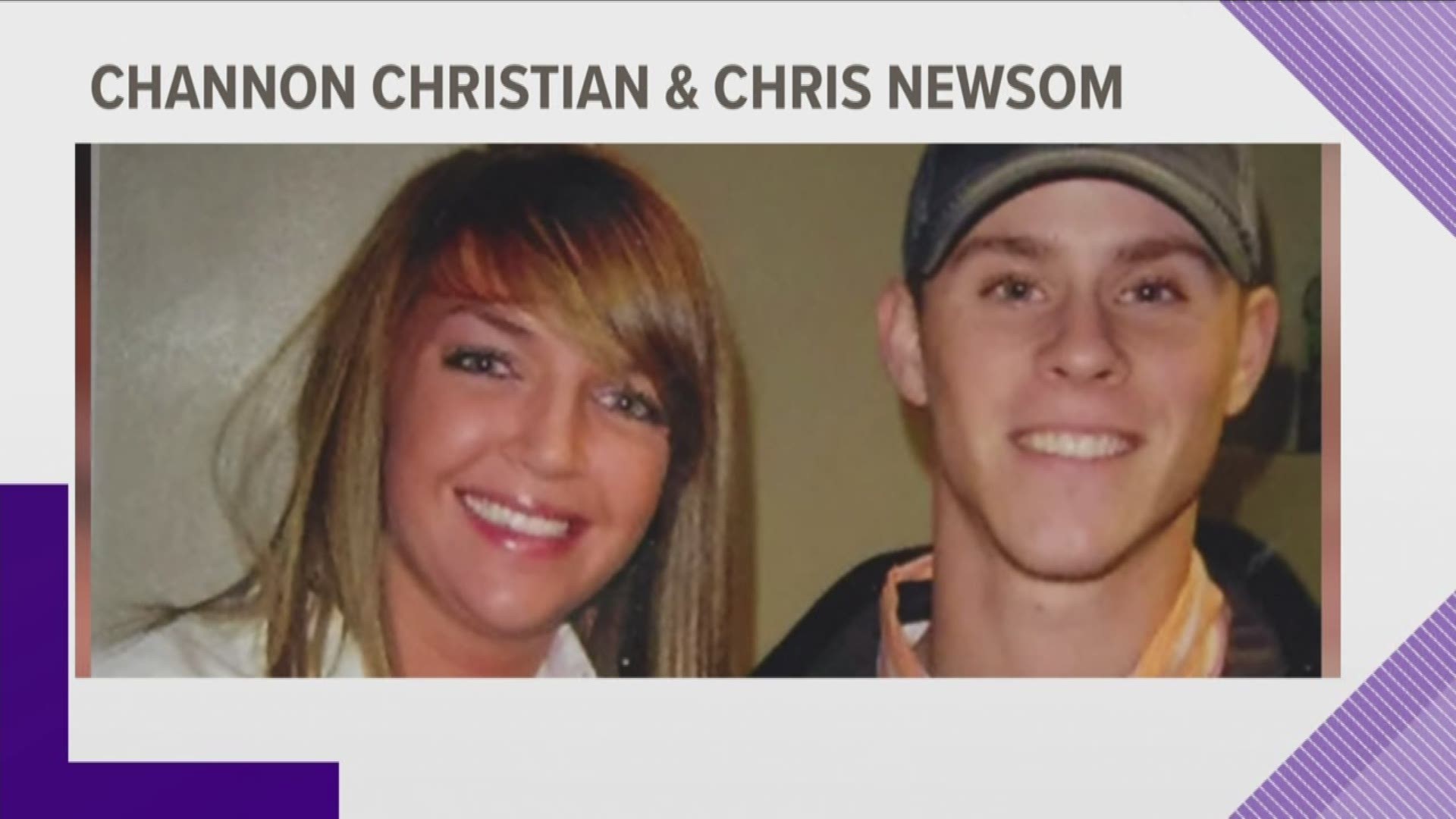 Now a Knox County jury gets to decide if the 47-year-old convict indeed is a kidnapper, rapist and killer.

More than 12 years after the crimes, the Knoxville man finally will stand trial in the January 2007 torture-slayings of Chris Newsom, 23, and Channon Christian, 21. Jury selection begins August 5.

Boyd was friends with the ringleader in the case, Lemaricus Davidson. He helped hide Davidson days after the victims’ bodies were found at or near Davidson’s house.

Some of Davidson’s co-defendants have even said Boyd took part in the kidnappings and went to Davidson’s small rental house afterward.

But until April 20, 2018, Boyd had never been directly charged with kidnapping, raping or killing either of the young Knox Countians.

"I’ve always had a mother’s instinct that he was the one who murdered my son," Chris Newsom's mother Mary told 10News.

About 80 potential jurors will come in Monday morning for questioning. More can be summoned if necessary.

Jury selection is expected to take a couple days, and authorities estimate the trial will last no longer than two weeks.

NO REGARD FOR HUMAN LIFE

Born in 1972, Boyd has longtime Knoxville ties, including family here. He spent at least part of his childhood in Lonsdale, and picked up several juvenile petitions for offenses that included vandalism and breaking and entering.

By his early 20s, it's clear he was comfortable committing crimes. Indeed, he was breaking the law when his future co-defendants were still children.

He took part in an armed robbery spree in 1994 with a co-defendant that laid the path for his friendship with future killer Lemaricus Davidson.

Boyd, that authorities know of, held up nine stores and fast-food restaurants in about a 2 1/2 month period starting in March 1994.

Credit: TDOC
Eric Boyd shown in a state mugshot after his multiple robbery convictions from 1994.

His targets included a Walgreens on Kingston Pike, a Hardee's restaurant twice, a Pizza Hut on North Broadway, a Burger King on Kingston Pike, JT's Liquor Store on Western Avenue and an adult bookstore on Clinton Highway.

While running from the adult bookstore, he fired several shots into the car of someone just pulling into the parking lot. While robbing a Sutherland Avenue convenience store, he thought he saw the clerk reaching for a phone and fired two shots in the clerk's direction, hitting an anti-freeze display, records show.

While robbing the Hardee's on May 5, 1994, he fired shots into the restaurant ceiling, records show. During the Walgreens hold-up, Boyd jumped the pharmacy counter, forced people to lie down on the floor and took cash from the register.

As prosecutors would later note, Eric Boyd clearly had little regard for human life.

While in prison for the robberies, Boyd struck up a friendship with Lemaricus D. Davidson, the West Tennessee son of a crack cocaine addict and prostitute who'd been convicted of a carjacking and aggravated robbery in September in Madison County, Tenn.

Boyd was nine years older than Davidson. By early 2007, both were out of prison and living in Knoxville.

Davidson rented a tiny, two-bedroom house on Chipman Street near trash collecting company Waste Connections. He'd shared the home with girlfriend Daphne Sutton until they quarreled around Christmastime and she moved out.

Nicknamed "Slim," Davidson sold drugs for a living. In early January, his brother, Letalvis Cobbins, Cobbins' girlfriend Vanessa Coleman and their friend George Thomas caught a ride down from Kentucky to stay at the Chipman Street house.

None of them had jobs either. Thomas enjoyed sitting around the house smoking weed.

Neither Davidson nor his brother had a car. But Boyd, nicknamed "E," had one he could borrow from a cousin.

On the night of Jan. 6, 2007, Davidson had promised to stop and see a woman living in the Washington Ridge apartment complex some 3.5 miles away off Washington Pike. He owed her money that he really didn't have.

Coincidentally, Chris Newsom and Channon Christian were hanging out at the same complex, where a friend of Channon's lived. The young couple planned that night to go to a party.

Testifying later at his own murder trial, Cobbins would recall that Boyd agreed to drive Davidson to Washington Ridge, and Cobbins went with them.

"They did not have transportation unless Eric Boyd furnished it," Hugh Newsom would later recall.

Coleman also later told investigators that Cobbins left the house that night with Davidson and Boyd.

Cobbins claimed the men were out cruising trying to find him a girlfriend, even though he already had Coleman waiting back at Chipman Street. In truth, Davidson started looking for someone to carjack.

Newsom and Christian happened to be standing in the parking lot near her Toyota 4Runner, kissing. To Davidson, they were a perfect target.

Channon Christian and Christopher Newsom are pictured in this submitted photo. The young couple was kidnapped, raped, and murdered in 2007.

Cobbins testified that as he watched, Boyd and Davidson ran to the Toyota.

"My brother and E. - they carjacked these people," he said.

Boyd and Davidson took control of the vehicle. Cobbins slid behind the wheel of Boyd's borrowed vehicle.

Back to Chipman Street they went.

Thomas and Coleman later told police Boyd went into the Chipman Street house after the carjacking.

Cobbins recalled during testimony seeing Davidson walk into the house at some point with "the girl."

A Waste Connections worker named Xavier Jenkins testified at several trials that he saw four black males in what turned out to be Christian's Toyota about 12:30 a.m. Jan. 7 near the Chipman Street house. Jenkins may share his story one more time; he's listed as a witness for Boyd's trial.

Thomas told investigators he saw Boyd lead a blindfolded Chris Newsom, or "Old Boy, as he referred to him," out of the house and into the night.

RELATED: Lawyer: We would have pointed 'finger' at Boyd in killings

An autopsy would show that Newsom was raped and assaulted with an object. The rapist left semen, but analysts could not make a genetic identification.

The attackers bound Newsom's feet and hands. He'd be led shoeless -- Davidson kept his new Nikes -- across muddy fields to nearby railroad tracks.

Someone shot him three times, in the back, neck and head. He was rolled onto his back, his head wrapped in a hooded sweatshirt, and set on fire.

Inside Chipman Street, Channon Christian was bound and held in one of Davidson's two small bedrooms. The interior had hardly any doors. The defendants would later admit to authorities they could hear pretty much anything that went on in the house.

Davidson raped Christian vaginally and anally. Cobbins ejaculated on her during oral sex. The medical examiner would testify she also suffered blunt force and abrasions.

She was hogtied, wrapped in trash bags and left to suffocate in a corner of Davidson's kitchen in a plastic trash can. Authorities estimate she died sometime between the afternoons of Jan. 7, 2007, and Jan. 8, 2007.

By then, everyone in the house had scattered.

Federal authorities tried Boyd in April 2008 as an accessory after the carjacking and for misprision of a felony. He was not indicted for murder or the carjacking itself.

Cobbins avoided the death penalty in his state trial but is serving a term of life without parole. Davidson got the death penalty. A jury found Thomas guilty of 38 charges including murder, rape, robbery and kidnapping. Coleman was convicted of facilitating many of the crimes.

Testimony during Boyd's federal trial showed he helped hide Davidson after Davidson abandoned the Chipman Street house, assisting him to find an empty house on Reynolds Street off Western Avenue in the Mechanicsville area.

He devised a code system using cellphones so the two friends could talk.

Boyd also betrayed Davidson on Jan. 11, according to authorities. When police stopped him in traffic, Boyd promised to lead them to Davidson, saying he "wasn't going to do any time in jail," federal records show.

Boyd agreed to a follow-up interview with Knoxville police. He showed he knew a lot about the crimes, although he claimed the knowledge all came from what Davidson told him.

Most of the evidence already gathered in the crimes has previously been introduced at the federal trials and during trials for Davidson, Cobbins, Thomas and Coleman. It's already been reported in the media.

What's out there that's new?

Knox County prosecutors have offered no hint ahead of Boyd's trial. Their witness list, however, features a potentially significant name: co-defendant George Thomas.

As 10News reported last week, Thomas has been transported from a Northeast Tennessee prison to Knox County for the Boyd trial.

Thomas frustrated interrogators after being taken into questioning. He hemmed and hawed, dodged responses, remarked over and over, "You know what I'm saying."

But Thomas was there as the carjackers set out. He was there when they returned with Christian and Newsom in blindfolds.

He saw Boyd lead Newsom into the night. He surely knows even more than he's ever let on.

Gary Christian, Channon's father, will attend the trial as will Channon's mother, Deena Christian, and the Newsoms.

Gary Christian remembers Boyd once smiling at him in federal court. He told 10News after Boyd was indicted that he didn't look forward to more court hearings.

But he was ready.