A boom of bears, elk, and traffic creates a death trap on I-40 through the Pigeon River gorge near the Smokies. Researchers want to create safe wildlife crossings. 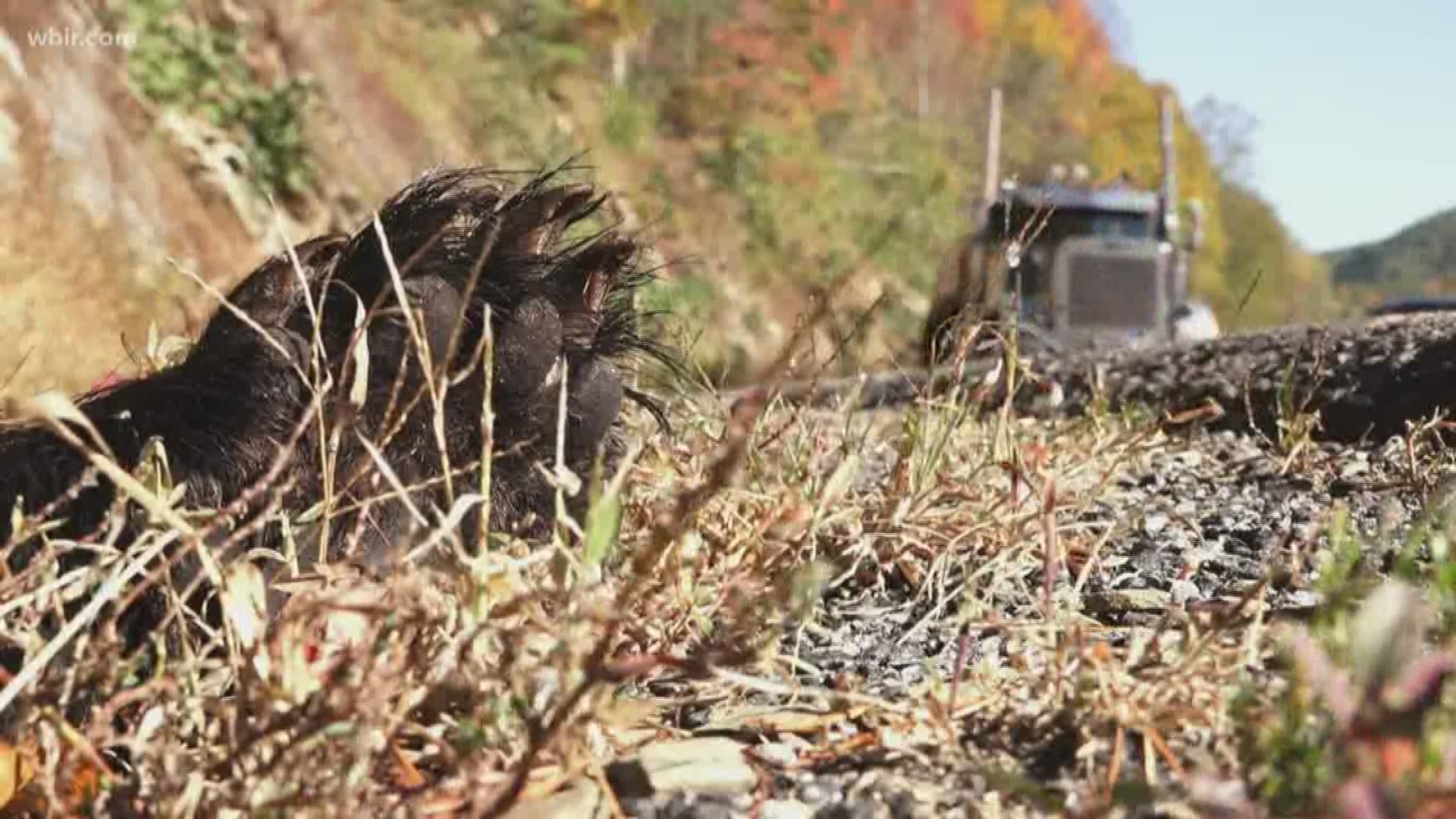 HAYWOOD COUNTY, N.C. — In August 2018, four lanes of busy traffic on Interstate 40 came to a complete stop in both directions near the state line of Tennessee and North Carolina.  Drivers applied the brakes for three tiny black bear cubs clumsily climbing over the center concrete divider to follow their mother to the other side of the interstate.

This was one of the rare wildlife crossings with a happy ending on the 28-mile section of I-40 through the Pigeon River gorge.  Experts call the stretch of interstate a "death trap" for animals and a danger to the 26,000 vehicles that drive through the gorge on I-40 every day.

"We have a lot of car collisions with wildlife on that stretch of I-40. I know one year there were at least 70 road-kill bears on that section of interstate," said Ryan Williamson, wildlife biologist with Great Smoky Mountains National Park (GSMNP).

Now the National Parks Conservation Association (NPCA) is bringing together several non-profit and governmental groups to search for solutions that can improve safety for both wildlife and drivers.

"Wildlife have been moving back and forth on this landscape for millennia. When this interstate opened in 1968, it created a hard barrier.  Compared to back then, we now have a lot more cars, a lot more bears, and a reintroduced elk population. There are things we can do to improve safety. Nobody wants to hit an animal," said NPCA program manager Jeff Hunter.

The distinct odor of decay and death filled the air downwind from a bear hit on Interstate 40.  Hunter photographed the animal on the narrow shoulder of the interstate around 10 miles from the Tennessee state line near the North Carolina Welcome Center.

Credit: WBIR
The remains of a roadkill black bear on the shoulder of Interstate 40 in North Carolina around 10 miles from the Tennessee state line.

"It is terrible. This black bear that was hit is a male, probably around 250 pounds, and it is really hard to look at.  For these animals that try to cross the pavement, to cross the concrete barrier at the center, it often ends badly," said Hunter.

Animals that successfully make it across concrete dividers and four lanes of 55 mph interstate can find themselves pinched between traffic and impassable cliffs on a very narrow shoulder.  When the interstate was built in the 1960s, construction crews cut the road into the hillside and sheared away many natural slopes wildlife can climb.

"We have around four times as many bears as we had 40 years ago. We see the ones dead on the side of the road. What we don't know is how many are hit and then run off injured and die. We don't see those. That number could be even higher than what we see dead on the side of the road," said Kim Delozier, a retired longtime GSMNP wildlife biologist who now works with the Rocky Mountain Elk Foundation (RMEF).

Credit: WBIR
A dead bear on the shoulder of Interstate 40 through the Pigeon River gorge on Oct. 24, 2019. Photo by Jeff Hunter with NPCA.

The GSMNP reintroduced elk to the North Carolina mountains in 2001. Since then, the herd has thrived, tripled its population, and expanded its range across the interstate.

In September 2019, a two-year-old bull elk was hit by a vehicle on the interstate. The animal broke both hind legs and was euthanized.

"Hitting an elk is really dangerous. They can weigh more than 900 pounds. They're tall enough that the front of a car will only hit their legs and their body can slam through the windshield.  We have the responsibility to see what we can do to help reduce the likelihood that animals are going to get hit trying to cross the interstate. Not only for them but also public safety," said Delozier.

Hunter and the NPCA are working with several groups to begin researching where and how wildlife cross Interstate 40.  By identifying where animals naturally tend to cross, the groups can hopefully identify solutions for safe passage across the interstate.

Credit: WBIR
Wildlife utilize a box culvert underpass to cross I-40 while avoiding interstate traffic. The underpass was built for use by Duke Power employees to reach a nearby dam.

"Once you find the 'hot spots' for where bears and other wildlife cross, there are several things you can do. You can build wildlife overpasses that act as a land bridge for wildlife to get from one side to the other. You can build underpasses beneath the interstate.  And in either case, you also install fencing that funnels wildlife into those areas and away from the death trap on the interstate," said Hunter.

Hunter said man-made wildlife crossings have proven successful in the western United States and Canada where they are accustomed to herds of elk and other large animals.  Sometimes, the fencing may direct animals to an existing passageway.

Hunter and NPCA invited a wildlife crossing expert from Banff National Park of Canada to examine the Pigeon River gorge and offer suggestions.

Credit: WBIR
Wildlife sometimes safely cross I-40 in the Pigeon River gorge by using the top of double-tunnels as a land bridge.

"They have almost totally eliminated wildlife mortality on highways through Canada parks where they had a massive problem with vehicles hitting elk and grizzly bears," said Hunter.

Hunter said the North Carolina Department of Transportation may have an opportunity to help create passages when it rebuilds five bridges through the gorge in the next few years.

Hunter thinks it may take a year or two for the research to identify where animals are successfully and unsuccessfully crossing the interstate.  Then the groups can determine the best options to help wildlife cross the interstate.

Credit: WBIR
Map of East Tennessee with the 28-mile section of Interstate 40 through the Pigeon River gorge into North Carolina highlighted in yellow. Superimposed image of the terrain by Google Earth.

Whatever the solution, Hunter said it is vital to reduce the barrier effect of the interstate.

"It is critically important to reconnect this landscape for future generations of humans and wildlife. If you can provide an opportunity for safe passage, over generations bear and elk and deer will teach their young to use those structures.  It will keep the animals out of the road. It will allow wildlife to get from one side of the road to access resources. This is a win-win. It just seems like the right thing to do," said Hunter.

YOU CAN HELP RESEARCHERS

If you hit an animal or see road kill on I-40 in the Pigeon River Gorge, note the nearest mile marker and call the North Carolina Wildlife Resources Commission hotline at 866-318-2401.